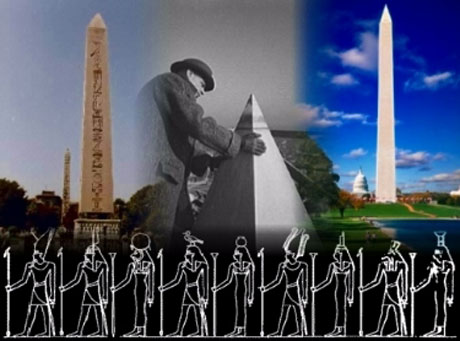 I dreamed that I was in the grasp of a great and horrible paw; a yellow, hairy, five-clawed paw which had reached out of the earth to crush and engulf me. And when I stopped to reflect what the paw was, it seemed to me that it was Egypt. - HP Lovecraft

This is only a test
At 5:05 on November 22, 1977, regular television programming in southern England was interrupted by a voice claiming to be that of "Grahama," representative of the "Ashtar Galactic Command," bearing the usual "space brother" boilerplate of coming in peace to save us from ouselves at the dawn of a New Age. It was quickly dismissed as a hoax, but an extremely complicated one to execute. Though the The Sunday Times the following December 4 surmised it was accomplished by students using just "£80 worth of equipment powered by an ordinary car battery," no one ever claimed responsibility, and independent investigations found that the message must have cut into at least five transmitters simultaneously, and it evaded detection by monitoring equipment which did not even register an interruption, "suggesting it was achieved in some way that bypassed our electrical system."

This was actually the second message from Grahama. A month earlier, he had said pointedly that "We conveyed to Sir John Whitmore and to Dr. Puharich that we would interfere on your radio and television communication systems to relay when the civilisations are coming close to landing on your planet Earth. It is now in motion. We wish you to know that we love you."

That "Grahama" would single out the aristocratic former racing champion Whitmore and parapsychologist and MKULTRA researcher Andrija Puharich suggests this was no simple hoax: both men were deeply involved with a decades'-long channelled communication with entities representing a universal hierarchy sometimes called the "70 Brotherhoods of the Great White Brotherhood." The entities governing our reality identified themselves the Nine.

Another link to Whitmore and Puharich was British author Stuart Holyroyd's recently published Prelude to the Landing on Planet Earth, which the two had commissioned as an account of their work with the Nine. In the book, Holroyd wrote that the Nine intended to “interrupt television and radio transmissions during the period 18th to 22nd November.”

Regarding the television interruptions, Lynn Picknett and Clive Prince write in The Stargate Conspiracy that, "as usual, there were only two options considered: either the whole thing was genuine and extraterrestrials had really spoken to the southern English through their television sets; or it was hoax, just done for a laugh. The idea that such a message could be easily contrived by, for example, an intelligence agency that would have the necessary technical skills has never, to our knowledge, even been considered."

This seems a bizarre oversight given the circumstantial connections to Whitmore and Puharich, and especially the latter's service in Army Intelligence and later as a CIA contractor researching the induction of altered states of consciousness. (Whitmore, incidentally, is now also Britain's "number one business coach," training top executives from companies such as Barclays, Lloyds, Pricewaterhouse Coopers and Rolls Royce.) Uri Geller, for a time one of the Nine's channellers, told Picknett and Prince that "the CIA brought Puharich in to come and get me out of Israel," and in his essay In the Thick of It, physicist Jack Sarfatti writes that "Puharich was Geller's case officer in America with money provided by Sir John Whitmore."

The Deep Space Nine
The "Council of Nine" have been delivering curiously consistent messages through a succession of mediums to influential patrons with names like DuPont, Astor and Bronfman since the early 1950s, and nearly always in the shadow of military intelligence. Until his death in 1995 Puharich made his home in that shadow, researching shamanic pharmacology and electronic mind control.

Initial contact was made during a sitting of Puharich's CIA cut-out "Round Table Foundation" on New Year's Eve, 1952, at precisely 9 p.m., when the entities disclosed themselves through the tranceivership of Dr DG Vinod as the "Nine Principles or Forces."

In the early 1970s, Star Trek creator Gene Roddenberry was a regular at the sessions of channeller Phylis Schlemmer to whom the Nine had revealed themselves through the manifestation of a spirit guide called "Tom." Schlemmer initially assumed Tom must be her grandfather Thomas, who died when she was a child. In September 1974 Roddenberry asked Tom the question, "To whom am I talking? Do you have a name?" Tom's reply, through the entranced Schlemmer, as quoted by Picknett and Price:

As you know, I am the spokesman for the Nine. But I also have another position, which I have with you in the project. I will try to give you names so you can understand in what you work and who we are. I may not pronounce who I am in a manner which you would understand because of the problem in the Being's [i.e., Schlemmer] brain, but I will explain so that the Doctor [Puharich] perhaps will understand. I am Tom, but I am also Harmarchis, I am also Harenkur, I am also known as Tum and I am known as Atum.

It took 22 years, and Gene Roddenberry, for the Nine to reveal themselves as The Nine, the Great Ennead of ancient Egypt: Atum, Shu, Tefnut, Geb, Nut, Osiris, Isis, Set and Nepthys. Their message amounts to, We're back, and now it's personal.

(How much the Nine may have influenced Roddenberry is unknown. His involvement began several years after the original Star Trek series was cancelled, but a character named Vinod pops up in an episode of Deep Space Nine entitled "Paradise.")

In 1954, with Puharich back in uniform and stationed at the US Army Chemical Center in Edgewood, Maryland, a young Dutch sculptor named Harry Stone was being tested at the Round Table for his psychometric powers. Handed an Egyptian pendant that had belonged to the mother of Akenaten, he fell into a trance, began uttering strange words and drawing hieroglyphics on a sheet of paper. In English he spoke of a drug that would open a gateway to the gods, and of entering an underground hall where a statue of a dog-headed man came to life. Puharich was sent the drawings and a transcription of Stone's words, who took them to another Army doctor at Edgewood who, write Picknett and Prince, "just happened to be an expert in extremely rare and archaic forms of hieroglyphs", and to Puharich's surprise confirmed their authenticity. Stone had identified himself as Rahotep, and named his wife as Nefert, and mentioned the Pharoah Khufu.

Puharich was then astonished to discover that a man named Rahotep, married to Nefert, was known from Egyptian history, and likely lived under the reign of Khufu. Most significantly, Rahotep had been the High Priest of Heliopolis, the center of worship for the Nine, the Great Ennead.

The "gateway to the gods" proved a sacred mushroom. On one occasion when Puharich himself was hypnotizing Stone a Round Table trustee, Alice Bouverie, also fell into a trance and stated the mushroom was the kind now known as amanita muscaria, and said a specimen could be found not far from the house. It was. In one of Stone's trances, writes Colin Wilson in Mysteries, "Rahotep demanded a mushroom and then, in the presence of Puharich and Aldous Huxley, applied it ritualistically to his tongue and the top of his head. When Stone woke up five minutes later, he was able to perform an ESP test with a 100% score and describe accurately what lay on the other side of a brick wall."

"Tom" plays the race card
The Nine claim that something has gone wrong with humanity's "programming," and so the Old Gods of Egypt, whose home is Sirius, are returning to reboot us. Humanity is supposedly the product of genetically-manipulated colonizers, whose first civilization arose in Tibet in 32,400 BC, but apparently not all humanity.

According to the Nine, there was one indigineous race already on the Earth - the black. According to "Tom," the seeding of Earth by the Gods was an experment to see how "the originals [the black races] would evolve in comparison with those that colonized." The Nine say Hey, there's nothing wrong with that, but the teaching remains that it's only the non-black peoples of the Earth who have the divine programming. Also interestingly, the Nine have good things to say about most major American religions, including and especially Mormonism, and are quite fond of the teachings of Lucis Trust founder Alice Bailey, but singles out Islam for rebuke. "Tom" says Islam has been influenced by "the Fallen one," and in his book The Keys of Enoch, channeller of the Nine James Hurtak calls Muslims the "Children of Darkness."

Any of this sound familiar? Perhaps its inversion might.

Remember the Prophet Yahweh? His cosmology is eerily similar to that of the Nine, yet stood on its head. His God Yahweh is also, like Tom/Atum, a spaceman, but the starseed is the black race. Both the Prophet Yahweh and the Nine's channellers have proclaimed the immanence of mass landings, and great devastation for those who refuse the lordship of the old-is-new gods. Both hear voices, have delivered failed prophecies, and have a strong suggestion of military mind control about them. Both play the race card. And now, after the ethnic cleansing of New Orleans, America is playing with a deck full of race cards.

I don't know what's going on with the Nine, but a credulous reading of the story suggests a Freemasonic eschaton and the return of the original White Lodge from Sirius. If this isn't happening, then sinister forces - after all, Peter Levenda subtitled the first volume of his Grimoire of American Political Witchcraft "The Nine" - are conspiring to make it appear so, and it has been going on for over 50 years. Generations of leaders and scientists have risen to prominence under its influence. Dick Farley, former director of program development for the Human Potential Foundation, writes that the Nine maintain a "working network of physicists and psychics, intelligence operatives and powerful billionaires, who are less concerned about their 'source' and its weirdness than they are about having every advantage and new data edge in what they believe is a battle for Earth itself." Jack Sarfatti, who received mysterious, mechanical-voiced phone calls from an alleged UFO of the future in 1952, the same year the Nine first spoke through Dr Vinod, adds "the fact remains...that a bunch of apparently California New Age flakes into UFOs and psychic phenomena, including myself, had made their way into the highest levels of the American ruling class and the Soviet Union and today run the Gorbachev Foundation."

Whatever the Nine are playing, and whatever is playing the Nine, it's been a long game.