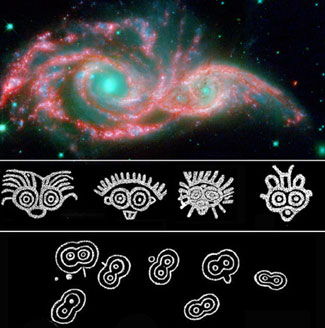 NASA scientists tell us that two "colliding galaxies" in the constellation Canis Major are responsible for the amazing, mask-like structure shown here. But experts in plasma discharge might suggest a different conclusion.

In a supposedly EXPANDING universe still rushing outward from the Big Bang, one would think that the vast reaches of space are an unlikely place for "fender-benders." Yet the word "collision" is extremely common in scientific press releases these days, as astronomers grasp for explanations of galactic events in faraway places. It is gaseous collisions that generate the X-rays, radio waves, and synchrotron radiation detected throughout the cosmos, they tell us.

The picture above shows the galaxies NGC 2207 and IC 2163 in the constellation Canis Major in what astronomers are calling a "cosmic smash up." The structure's unique appearance has led investigators to dub it "The Galactic Mask." They say the mask's "eyes" are the galactic cores, and its "feathers" are the galaxies' star-filled spiral arms.

Vassar College astronomer Debra Elmegreen, the lead author of a paper on the observations, said of the image: "This is the most elaborate case of beading we've seen in galaxies...."They are evenly spaced and sized along the arms of both galaxies."

MSNBC's Cosmic Log website, describing the scientists' observations, tells us that the bead-like structure of the spiral arms is caused by "gravitational pressures (squeezing) gas and dust into new clusters of stars."

The website also reports: "There's one particularly bright bead on the left side of the mask -- so bright it accounts for 5 percent of the total infrared emissions coming from both galaxies...Elmegreen's team thinks the stars in this dense, dusty cluster might have merged to become a black hole."

"To form a black hole that's outside the disk of the galaxy is a real surprise, if in fact that's what it is," said one of the research team's co-authors.

Experts in plasma discharge phenomena will use a much different language to describe the image. For decades, advanced research into plasma discharge instabilities has documented formations precisely matching galactic structures seen in space. As noted in an earlier TPOD, plasma scientist Anthony Perratt, using particle-in-cell computer simulations, has demonstrated the evolution of galactic structures under the influence of electric currents. Through the "pinch effect", parallel currents converge to produce spiraling structures. Dual, interacting currents can, in fact, present an appearance surprisingly similar to that of the twin eyes in the "Galactic Mask" seen above.
(See "Plasma Galaxies,"
http://www.thunderbolts.info/tpod/2006/
arch06/060602plasma-galaxy.htm)

To see the connection between plasma experiments and plasma formations in space, it is essential to understand the scalability of plasma phenomena. Under similar conditions, plasma discharge will produce the same formations irrespective of the size of the event. The same basic patterns will be seen at laboratory, planetary, stellar, and galactic levels. Duration is proportional to size as well. A spark that lasts for microseconds in the laboratory may continue for years at planetary or stellar scales, or for millions of years at galactic or intergalactic scales.

Laboratory discharge experiments have documented all of the features of the "Galactic Mask" above. Indeed, the very words used in the article could have been taken from the lexicon of plasma scientists describing plasma discharge instabilities: "string of pearls," "beads on a string," "feathers," and "mask." In plasma discharge terms, the evenly spaced "beading" along spiraling arms is a perfect example of the "pinch effect" that, in plasma cosmology, gives birth to stars. In a more familiar setting, the same plasma pinch produces the oft-observed beading of lightning.

On the other hand, "gravitational pressure" supplemented by imagined "black holes" placed wherever energies are too high to be explained through old-fashioned gravity, can offer almost nothing to test scientifically. How, then, can the theories ever fail?

The explanatory power of plasma discharge becomes even more interesting when one begins to consider new evidence that our early ancestors witnessed strikingly similar high-energy plasma discharge in the TERRESTRIAL sky. (See Plasma in the Lab and in Rock Art http://www.thunderbolts.info/tpod/2005/
arch05/050506plasma-rock-art.htm).
The rock art images above are from North America (first row) and Easter Island (second row). Innumerable counterparts occur around the world -- all presenting a common pattern that would seem to mock natural experience: disembodied, often "hairy" eyes presented in a consistently "non-human" form.

The pictures are not random, either in their geographic positioning, or in their depictions of detail. And in almost every instance they sit alongside equally enigmatic carvings of other well-defined motifs, all chronicled through cross cultural comparison, and now posing a grand mystery yet to be unraveled by rock art specialists.

When seen from a larger perspective, three independent lines of evidence -- galactic structure, plasma experiments, and images carved on stone -- converge to tell the same story.

For an introduction to the interdisciplinary exploration of the new evidence and the ancient story it illuminates, we refer the reader to a PDF of the Introduction and Chapter One of Thunderbolts of the Gods:
http://www.thunderbolts.info/pdf/01.1PART%20I_Ch1.pdf