The Golden Hall of Edoras and the Vikings

Editor's comment: This is an excellent and historically valuable article from a blog that examines the architecture of Middle Earth, from Tolkien's Lord of the Rings. This particular article examines the timber construction of the King's Hall "Meduseld," also known as "the Golden Hall of Rohan," in Edoras. The author compares the design of Meduseld with that of Norse heathen temples or "Hof's" as constructed by the Viking and the Geats, as mentioned in the epic poem Beowulf, from Götaland.

As we know, J.R.R. Tolkien took a great amount of inspiration from the epic poem Beowulf and Rohan’s culture, and so its architecture, are the perfect example. (If you have never read the poem, I highly recommend you to – this year the translation from our beloved Professor came out on stores, with a long and interesting commentary, and you can buy it here.) 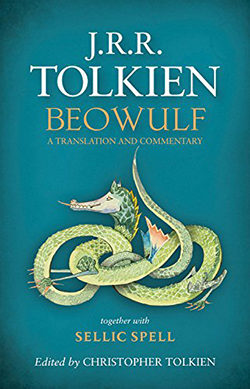 “Beowulf is among my most valued sources; though it was not consciously present to the mind in the process of writing, in which the episode of the theft arose naturally (and almost inevitably) from the circumstances. It is difficult to think of any other way of conducting the story at this point. I fancy the author of Beowulf would say much the same.”

Keep in mind: the material and the ideas you will find here, do not represent Tolkien’s thoughts and Peter Jackson’s view of things (or John Howe and Alan Lee’s). This is by no means an accurate atlas of what they were thinking when writing, drawing, creating. It is only a fun way to relate something that comes from the pen of a genius (and the pencil of two artists) to our reality. I will not draw detailed technical plans, because I can understand not all of you can read that kind of drawings. I will try to make it easier with schemes, more than architectural plans.

In Beowulf there is indeed a building which gave a lot of inspiration to the Professor, the so called Heorot.

“Then it came to his heart that he would command men to fashion a hall and a mansion, a mightier house for their mead-drinking than the children of men had ever known, and there-within would he apportion all things to young and old such as God had granted him, save the people’s land and the lives of men.

Then have I heard that far and wide to many a kindred on this middle-earth was that work proclaimed, the adorning of that dwelling of men. In a while, swiftly among men, it came to pass for him that it was all made ready, the greatest of hoses and halls. For it he devised the name of Heorot, even he whose word far and wide was law. His vow he belied not: the rings he dealt and treasure at the feast. The hall towered high with horned gables wide (…)” (lines 53-66, Beowulf. A translation and commentary, J.R.R. Tolkien)

But let’s start from scratch, as always.

The word Meduseld, called also Golden Hall, comes from the Anglo-Saxon Maeduselde, which literally means “mead hall”, as in hall of feast. A mead hall, probably an evolution of the långhus (in English longhouse), is a typical building from Scandinavia, longer than large, with a single room, generally used as Great Hall of the King.

The most important example we still have of mead-halls are basically reconstructions, than actual buildings, as you can see from the picture below. 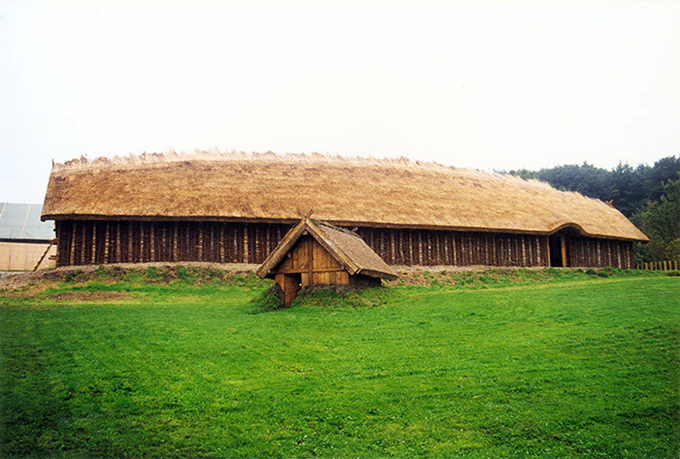 Fyrkat, a reconstruction of a Danish mead hall in Hobro, Denmark.

We have, though, archaeological remains of some of them, in particular the three settlements in Lejre, Denmark; probably the main location for the Heorot of Beowulf – since also the construction period is almost the same. I will focus on one of them – the settlement of Mysselhøjgård, and you can see the area from Google Maps (here).

You can clearly see the remains of long and huge buildings; this one in particular, 48.5 m long, was constructed over another hall using the same post-holes as foundations, between the the V-VI century A.D..

Plan made by Roskilde Museum.

We can start to define some characteristics: we have a three aisled building, made of timber (wood), the entrance was on the longest sides (and there were four of them), there was a fireplace in the middle (and a hole on the roof for the smoke), the cellars, and it probably was divided in six rooms (one of them probably a private chamber for the Lord). There were not many windows, usually with wood shutters, because the building had to be defended and protected from the weather, so the main lights came from torches. Along one of the longest walls, usually there was a podium raised of few steps, for the Lord and his Lady (or King and Queen), while on both sides of it there were the mead benches for their men. Roofs were made of timber and straw. 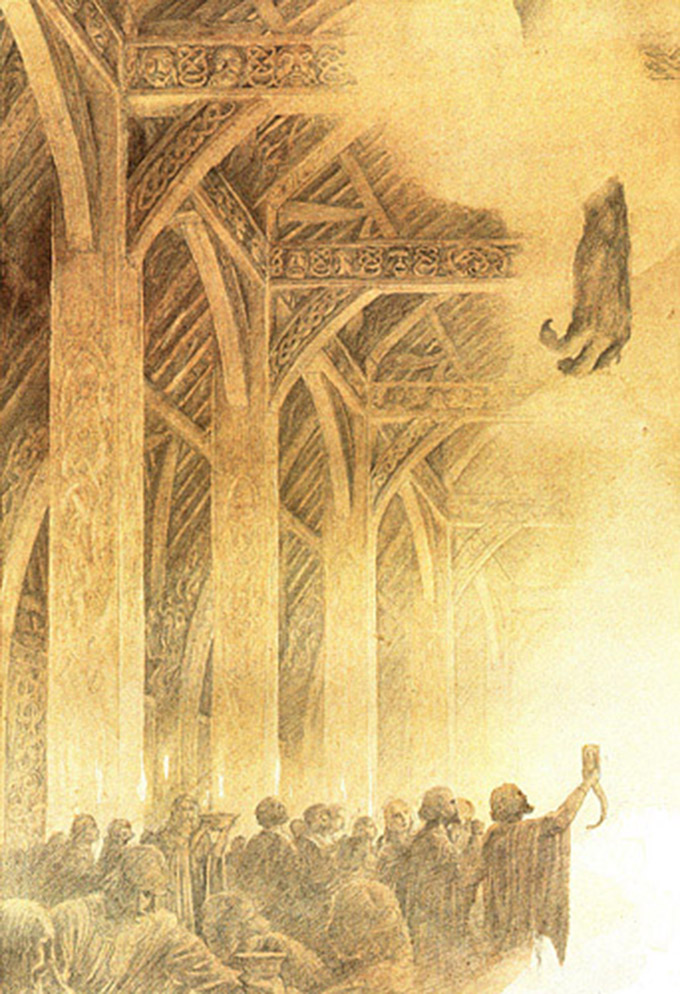 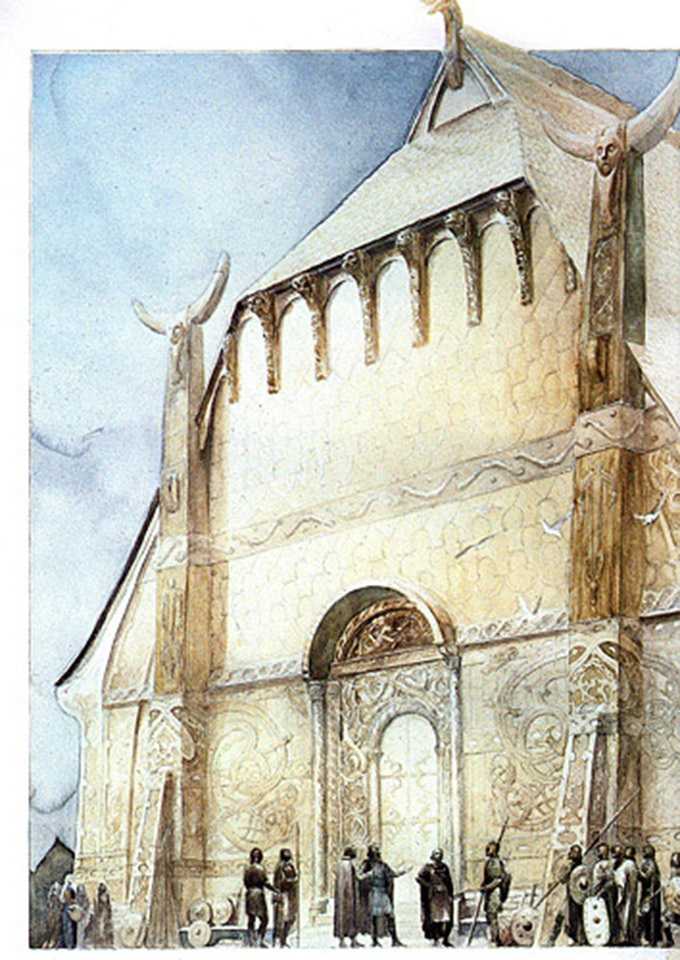 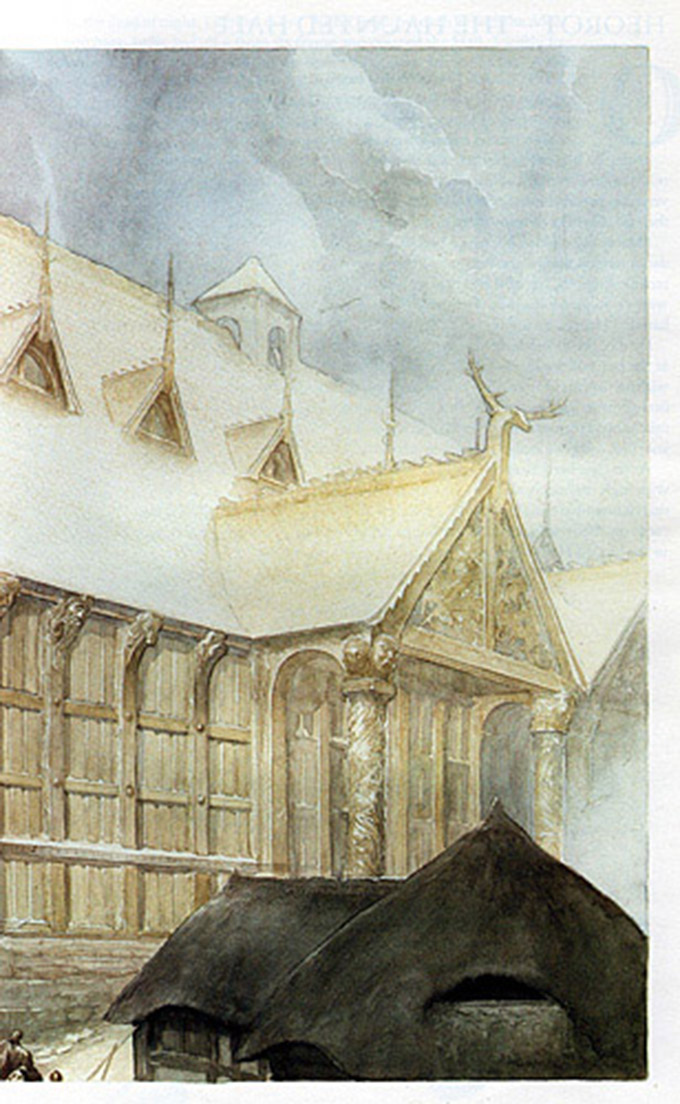 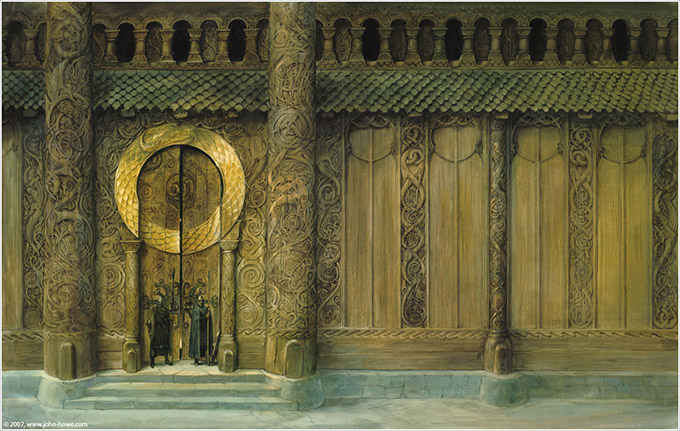 As for the decorations, we will take for granted that Beowulf is stating the truth:

Does it sound familiar?

Going back to the beginning, Meduseld was known also as the Golden Hall.

“Edoras those courts are called,’ said Gandalf, ‘and Meduseld is that golden hall. There dwells Théoden son of Thengel, King of the Mark of Rohan.” (Lord of the Rings: The Two Towers, chapter 6, The King of the Golden Hall)

Let’s focus a moment on the exterior of the building. It’s different from the reconstructions we have of the old longhouses, but we can find many similarities with Scandinavian architectures.

For example the roof is made of straw, as you can see from the picture above. 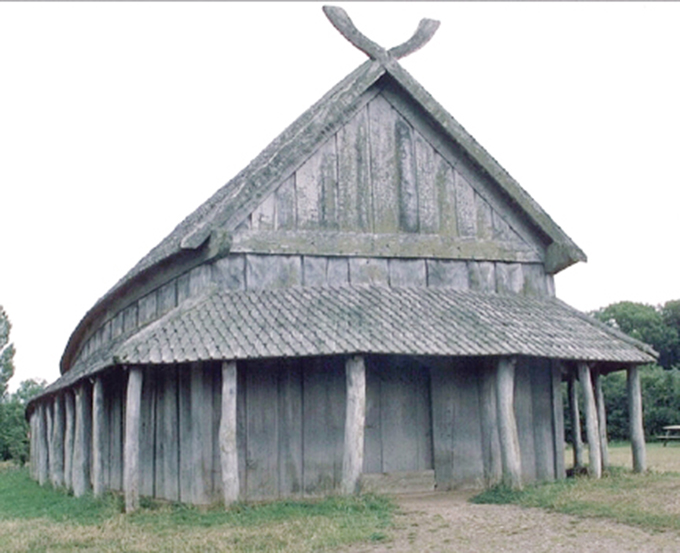 Trælleborg Hall, in Slagelse, on the Danish island of Zealand.

The decoration of the roof, and in particular of the gable, is basically the same. In Meduseld we have, of course, the recurrent theme of Horses, since they are the Lords of Horses, but we actually have something very similar in the Saxon architecture: 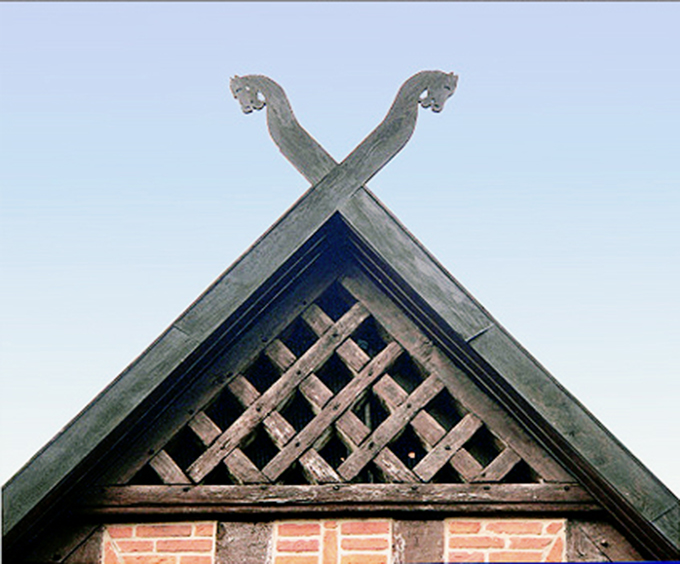 Gable decoration in a German building, in Wedemark.

Another example that resembles our Golden Hall is the Borgund stave church, in Norway, as you can see from the two photos below. 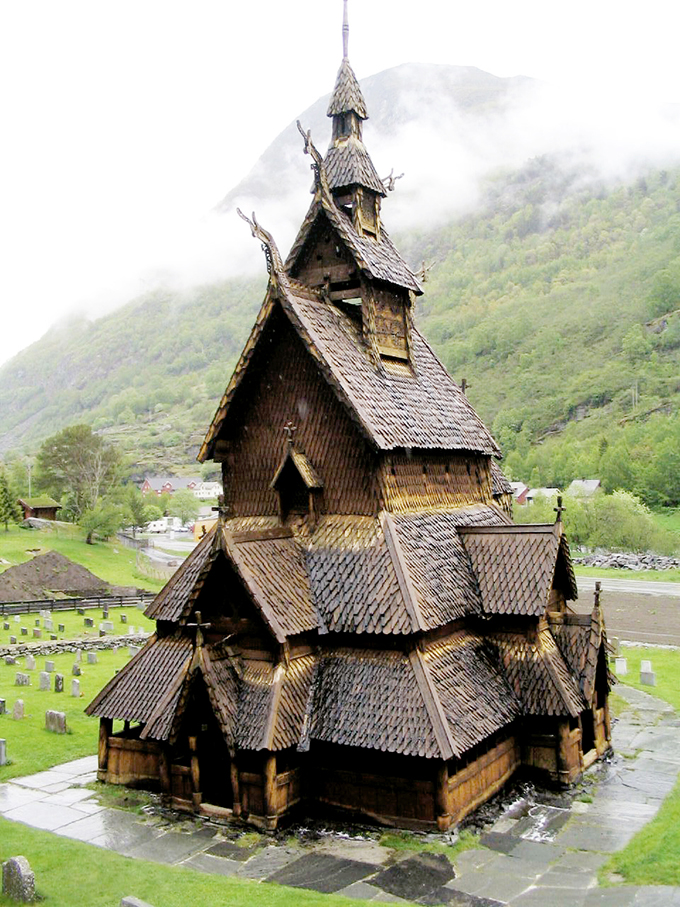 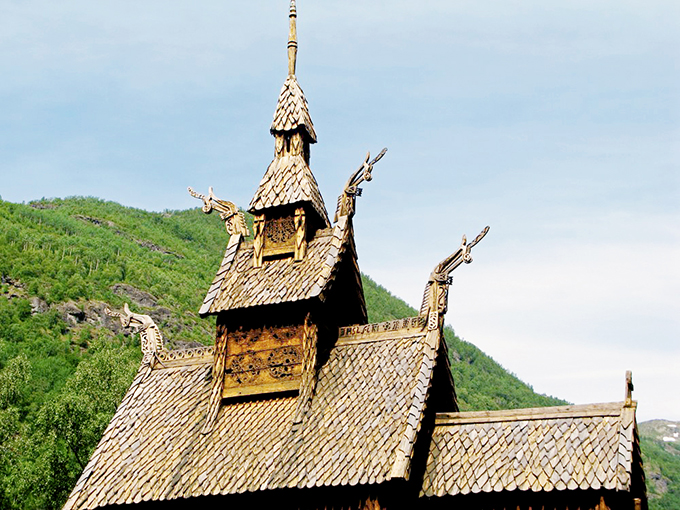 Instead of the horses, in the gable’s decoration we have a sort of dragon, which comes from the Norse ships.

And, if we look closer at the golden decorations in Meduseld we can easily see the typical Norse design in them. 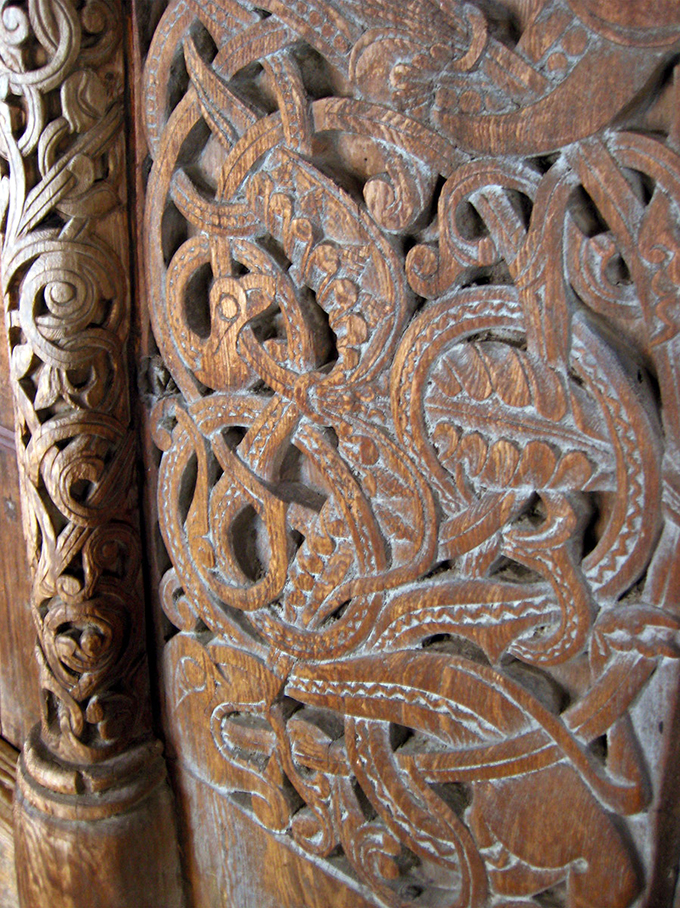 Now, let’s have a look inside.

“The travellers entered. Inside it seemed dark and warm after the clear air upon the hill. The hall was long and wide and filled with shadows and half lights; mighty pillars upheld its lofty roof.” (Lord of the Rings: The Two Towers, chapter 6, The King of the Golden Hall)

“But here and there bright sunbeams fell in glimmering shafts from the eastern windows, high under the deep eaves. Through the louver in the roof, above the thin wisps of issuing smoke, the sky showed pale and blue. As their eyes changed, the travellers perceived that the floor was paved with stones of many hues; branching runes and strange devices intertwined beneath their feet. They saw now that the pillars were richly carved, gleaming dully with gold and half-seen colours. Many woven cloths were hung upon the walls, and over their wide spaces marched figures of ancient legend, some dim with years, some darkling in the shade.” (Lord of the Rings: The Two Towers, chapter 6, The King of the Golden Hall)

(Take a look to the beautiful capitals of the columns: head-horses carved in wood instead of the usual ones.)

“Now the four companions went forward, past the clear wood-fire burning upon the long hearth in the midst of the hall. Then they halted. At the far end of the house, beyond the hearth and facing north towards the doors, was a dais with three steps; and in the middle of the dais was a great gilded chair.”

What we see in the movie and what we read in the books (both The Lord of the Rings and Beowulf) is basically the same – I have bolded some parts that may help you to compare the Golden House with the Heorot.

As I have explained in the beginning of the article, usually the longhouses were divided in different spaces, but the main use of the building was the Throne Room and the hall of feast: and we have both.

Remember what happened after this scene?

Exactly. Ale and music and food! You can spy the throne there on the right side of the picture above.

Now, we also know that there are some private chambers: we see one when Eowyn is crying for his cousin Theodred:

And the one where Gandalf and part of the Fellowship sleep:

So, I have been thinking: how is really this place inside? And after a long analysis of what we can see from the movies, this is my main idea: 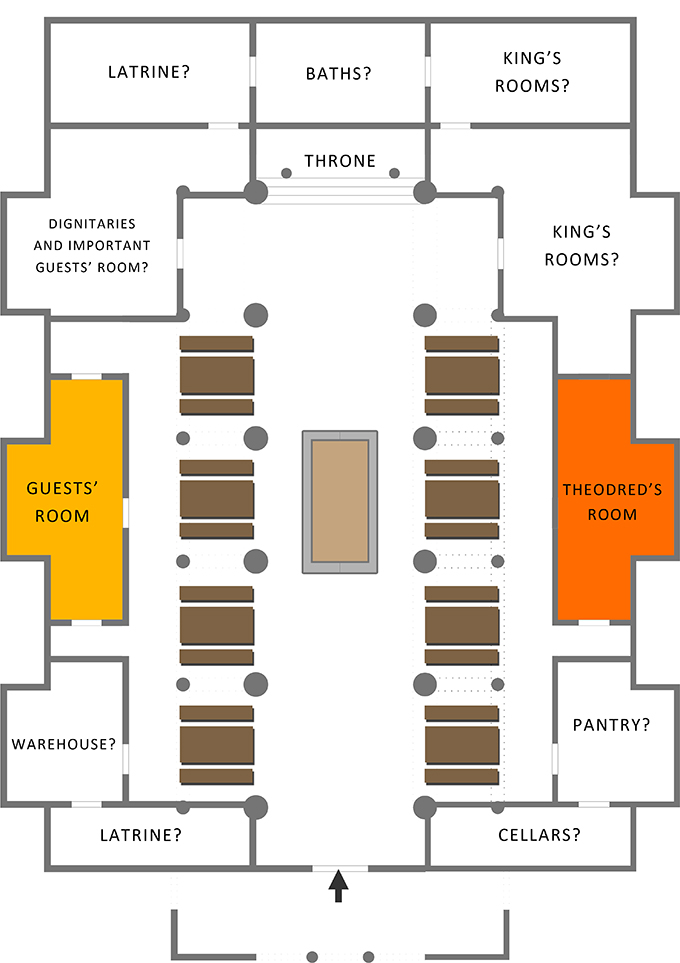 I am quite sure that the guests’ room and Theodred’s are those two I have underlined on the picture, both for the shape and the position of the doors. The others are only my speculation, because I do not know the division of the rooms nor their use, but it is realistic to think it could be like this. The king’s room and the dignitaries’ room are the biggest and closer to the throne, with a direct access to the private baths (of course, there will be some privacy between men and women, and between baths and latrine, but I have not got into details… it is just a sketch). Then, they will need a warehouse and cellars for all that food and ale and wood for the fire (we have already seen that they probably existed in the old Scandinavian longhouses).

Last, but not least, the section of the building: as we know, it was made in timber and the shape of the previous church we saw before, the Borgund stave church in Norway, is perfect to describe the main static system of Meduseld, too, because it is probably the same. 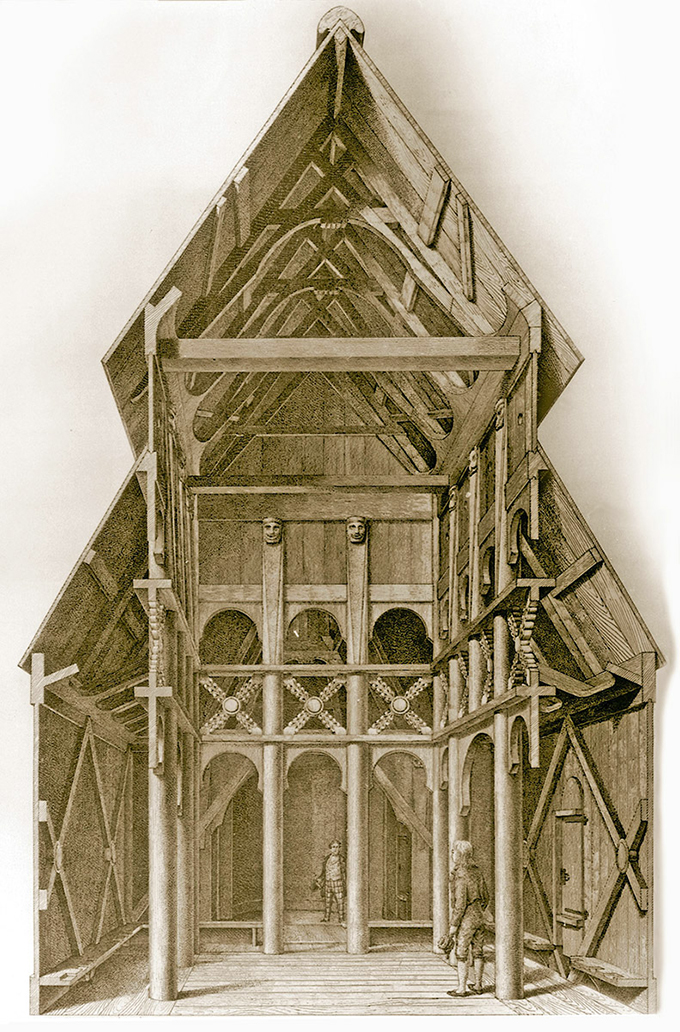 Borgund stave church, perspective section made by G. A. Bull.

A system of wooden columns, beams, arches and trusses, a pitched roof with a very high angle (probably more than 45°) – even though this inclination was used in Scandinavia due to the snow loads, but I doubt in Rohan it snowed so often to require a roof like that.

Please visit middleeartharchitectures for much more on the architecture and the historical sources from the Lord of the Rings.