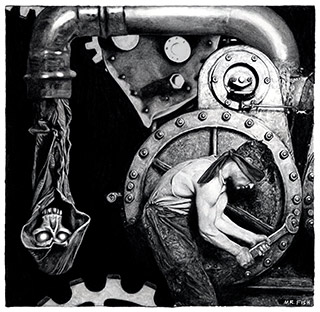 The greatest crimes of human history are made possible by the most colorless human beings. They are the careerists. The bureaucrats. The cynics. They do the little chores that make vast, complicated systems of exploitation and death a reality. They collect and read the personal data gathered on tens of millions of us by the security and surveillance state. They keep the accounts of ExxonMobil, BP and Goldman Sachs. They build or pilot aerial drones. They work in corporate advertising and public relations. They issue the forms. They process the papers. They deny food stamps to some and unemployment benefits or medical coverage to others. They enforce the laws and the regulations. And they do not ask questions.

Good. Evil. These words do not mean anything to them. They are beyond morality. They are there to make corporate systems function. If insurance companies abandon tens of millions of sick to suffer and die, so be it. If banks and sheriff departments toss families out of their homes, so be it. If financial firms rob citizens of their savings, so be it. If the government shuts down schools and libraries, so be it. If the military murders children in Pakistan or Afghanistan, so be it. If commodity speculators drive up the cost of rice and corn and wheat so that they are unaffordable for hundreds of millions of poor across the planet, so be it. If Congress and the courts strip citizens of basic civil liberties, so be it. If the fossil fuel industry turns the earth into a broiler of greenhouse gases that doom us, so be it. They serve the system. The god of profit and exploitation. The most dangerous force in the industrialized world does not come from those who wield radical creeds, whether Islamic radicalism or Christian fundamentalism, but from legions of faceless bureaucrats who claw their way up layered corporate and governmental machines. They serve any system that meets their pathetic quota of needs.

These systems managers believe nothing. They have no loyalty. They are rootless. They do not think beyond their tiny, insignificant roles. They are blind and deaf. They are, at least regarding the great ideas and patterns of human civilization and history, utterly illiterate. And we churn them out of universities. Lawyers. Technocrats. Business majors. Financial managers. IT specialists. Consultants. Petroleum engineers. "Positive psychologists." Communications majors. Cadets. Sales representatives. Computer programmers. Men and women who know no history, know no ideas. They live and think in an intellectual vacuum, a world of stultifying minutia. They are T.S. Eliot’s "the hollow men," "the stuffed men." "Shape without form, shade without colour," the poet wrote. "Paralysed force, gesture without motion."

It was the careerists who made possible the genocides, from the extermination of Native Americans to the Turkish slaughter of the Armenians to the Nazi Holocaust to Stalin’s liquidations. They were the ones who kept the trains running. They filled out the forms and presided over the property confiscations. They rationed the food while children starved. They manufactured the guns. They ran the prisons. They enforced travel bans, confiscated passports, seized bank accounts and carried out segregation. They enforced the law. They did their jobs.

Read the full article at: truth-out.org