The Hegelian Dialectic and its use in Controlling Modern Society

Aug 9, 2013 Source: realnewsaustralia.com
What exactly is the Hegelian Dialectic? Georg Wilhelm Friedrich Hegel was a 19th century German philosopher who devised a particular dialectic, or, method of argument for resolving disagreements. His method of arriving at the truth by the exchange of logical arguments is a system of thought process still use to this day.

To put it simply, the basis of Hegelianism dictates that the human mind can’t understand anything unless it can be split into two polar opposites. Good / Evil, Right / Wrong, Left / Right.

For example when people are talking about 2 political parties, Labor or Liberal, what they’re actually referring to, without realising it, is the thesis and the antithesis based off the Hegelian Dialectic. The only real debate that occurs is just the minor differences between those two parties. Nothing is said or done about the issues that neither left or right is discussing. This in particular will become more apparent as the election draws near. 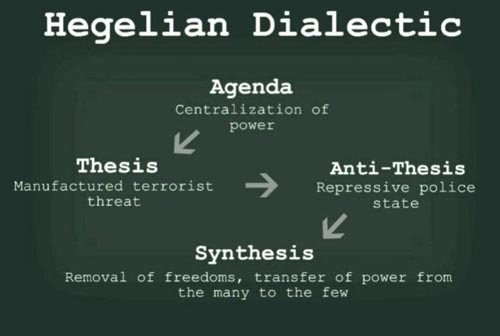 Another form of the Hegelian Dialectic is Problem – Reaction – Solution. Most of us unwittingly fall victim to it all too often and sadly if we don’t stop, we will continue to lose our free will and liberties. It has been widely used by our governments and corporations around the world. You could say that in terms of controlling the masses, and society in general, it’s deployment has been an effective tool in keeping humanity in check.

Almost all major events in history employ the Hegelian Dialectic of:
Problem – manufacture a crisis or take advantage of one already in place in order to get the desired Reaction of public outcry whereby the public demands a Solution which as been predetermined from the beginning.

Only when you break the left/right paradigm and come to the realisation that the invasion of Iraq and Afghanistan and the whole fake, and not to mention contradictory, war on terror was the desired outcome for the neo-conservatives within the Bush administration and the whole military industrial complex. They in fact stated in their own white papers the need for another catastrophic and catalysing event like a “new Pearl Harbour”.

Read the full article at: realnewsaustralia.com