The JASON Society & The JASON Group 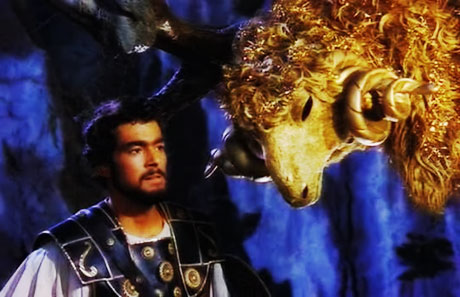 Jason and the Argonauts (1963)
The JASON Society, or JASON Scholars, takes its name from the story of Jason and the Golden Fleece, and it is a branch of the Order of the Quest, one of the highest degrees in the Illuminati. The golden fleece takes on the role of truth to the JASON members. Jason represents the search for truth. Therefore the name JASON Society denotes a group of men who are engaged in a search for the truth. The name Jason is spelled with capital letters when used as the name of the JASON Society. Lower-case letters are never used when referring to this secret group. The name may even have deeper meaning, as the name "Jason" and the Golden Fleece appear throughout history in relation to various other secret societies. In these instances the story represents man (Jason) looking for himself (Golden Fleece).

Top Secret documents that I read while with the Naval Intelligence stated that President Eisenhower had commissioned the JASON Society to examine all of the evidence, facts, lies, and deception and find the truth of the alien question.

Founders of the JASON Group (not the same as JASON Society) include members of the famous Manhattan Project, which brought together almost every leading physicist in the nation to build the atomic bomb during World War II. The group is made up mostly of theoretical physicists and is the most elite gathering of scientific minds in the United States. As of 1987 the membership included four Nobel Prize winners. Today JASON continues to offer scientific help the government cannot find anywhere else. They are probably the only group of scientists in the United States that know the true state of highest technology.

JASON is shrouded in what appears to be unnecessary secrecy. The group refuses to release its membership list, none of the members list JASON membership on there official resumes. Working completely behind the scenes, JASON has guided the nation's most important security decisions. These include, but are not limited to, Star Wars, Submarine Warfare, and predictions about the greenhouse effect. The JASON members are paid $500.00 per-day consultant's fee.

In the documents that I read while with Naval Intelligence the JASONS predicted that the greenhouse effect would lead ultimately to an ICE AGE.

According to the Pentagon, the JASONS hold the highest and most restrictive security clearances in the nation. They are given the protocol rank of rear admiral (two stars) when they visit of travel aboard ships or visit military bases. The only other reference to the JASON group that I have been able to find is in the Pentagon Papers. The papers stated that JASON was responsible for designing the electronic barrier between North and South Vietnam War. I was stationed on the DMZ and I can tell you it did not work.

The veil of secrecy around the JASON Group has been so tight and so leak-proof since its conception that those who think the government cannot keep a secret need to reexamine that position. The government was able to contain the JASON secret except the one leak; but the JASON Group itself, a civilian group, did even better. No leaks have ever occurred from with in JASON. JASON is administered by the Mitre Corporation Government contracts allotted to the Mitre Corporation are in reality allotted to the JASON scientist. This is done so that the name JASON does not ever appear in documents which may come under public scrutiny.

I know a lot more about the JASON Society and the JASON Group, but I do not want to injure Mr. Grant Cameron, who has done extensiveresearch on these subjects. He will publish his research in the coming months. I guarantee his findings will amaze you.

The JASON Society
The Jason Society (Jason Scholars) - Former President Eisenhower commissioned a secret society known as the Jason Society (or Jason Scholars) under the leadership of the following; Director of Central Intelligence, Allen Welsh Dulles, Dr Zbigniew Brzezinski, President of the Trilateral Commission from 1973 until 1976, and Dr. Henry Kissenger, leader of the scientific effort, to sift through all the facts, evidence, technology, lies and deceptions and find the truth of the Alien question. The society was made up of thirty two (32) of the most prominent men in the USA.

MJ-12 is the name of the secret control group inside the Jason Society. The top 12 members of the 32 members of the Jason Society were designated as MJ-12. MJ-12 has control of everything. They are designated by the code J-1, J-2, J-3, etc. all the way through the members of the Jason Society. The director of Central Intelligence was appointed J-1 and is the Director of the MJ-12 group. MJ-12 use to only be responsible to the President of the United States (not true anymore). The actual cost of funding the Alien connected projects is higher than anything you could imagine! Believe it or not, MJ-12 runs most of the worlds illegal drug trade. This was done to hide funding and thus keep the secret from congress and the people of the United States. It was justified in that it would identify and eliminate the weak and undesired elements of our society.

A secret meeting place was constructed for the MJ-12 group in Maryland and is only accessible by air. It contains full living, recreational, and other facilities for the MJ-12 group and the Jason Society. It is code named "The Country Club". The land for The Country Club was donated by the Rockerfeller family. Only those with ULTRA TOP SECRET - MAJI clearances are allowed to go there.

MAJI - Majority Agency for Joint Intelligence. All information, disinformation, and intelligence is gathered and evaluated by this agency. This agency is responsible for all disinformation and operates in conjunction with the CIA, NSA, DIA, and the Office of Naval Intelligence. This is a very powerful organization and all Alien projects are under its control. MAJI is responsible only to MJ-12. MAJIC is the security classification and clearance of all Alien connected material, projects, and information.

NOTE: MJ-1 is the classification for the director of MAJI, who is the director of the CIA and reports only to the President. Other members of MAJI are designnated MJ-2, MJ-3, etc. This is why there is some confusion about references of MJ-12, the group or MJ-12 the person.

Designation for MJ-12, the group are MAJI or MAJIC Designation in official documents about MJ-12 means the person only.

In 1947, PROJECT SIGN was created to acquire as much information as possible about UFO's, their performance characteristics and their purposes. In order to preserve security, liason between Project Sign and MJ-12 was limited to two individuals within the intelligence division of the Air Material Command whose roll was to pass along certain types of information through channels. Project Sign evolved Project Grudge in December of 1948. Project Grudge had an overt civilian counterpart named PROJECT BLUE BOOK, with which we are all familiar. Only "Safe" reports were passed to Project Blue Book.

MJ-12 was originally organized by General George C. Marshall in July 1947 to study the Roswell-Magdalena UFO crash recovery and debris. Admiral Hillenkoetter, director of the CIA from May 1, 1947 until September 1950, decided to activate the "Robertson Panel," which was designed to monitor civilian UFO study groups that were appearing all over the country. He also joined NICAP in 1956 and was chosen as a member of its board of directors. It was from this position that he was able to act as the MJ-12 "Mole", along with his team of other covert experts. They were able to steer NICAP in any direction they wanted to go. With the "Flying Saucer Program" under complete control of MJ-12 and with the physical evidence hidden away, General Marshall felt more at ease with this very bizarre situation. These men and their successors have most successfully kept most of the public fooled up to the present, including much of the western world, by setting up false experts and throwing their influence behind them to make their plan work, with considerable success until now.

Within 6 months of the Roswell crash on July 2, 1947 and the finding of another crashed UFO at San Augustine Flats near Magdelena, New Mexico on July 3, 1947, a great deal of reorganization of agencies and shuffling of people took place. The main thrust behind the original "Security Lid", and the very reason for its construction, was the analysis and attempted duplication of the technologies of the discs. The activity was headed up by the following groups.

1. The Research and Development Board (R&DB)

3. The Office of Naval Research (ONR)

No single one of these groups knew the whole story. Each group was to know only the parts that MJ-12 allowed them to know. MJ-12 also operates through the various civilian intelligence and investigative groups. The CIA and FBI are manipulated by MJ-12 to carry out their purposes. The NSA was created in the first place to protect the secret of the recovered flying discs, and eventually got complete control over all communication intelligence. This control allows the NSA to monitor any individual through mail, telephone, telexes, telegrams, and now through on-line computers, monitoring private and personal communications as they may desire.

JASON Defense Advisory Group
JASON is an independent group of scientists that advises the U.S. government on matters of science and technology. The group was first created as a way to get a younger generation of scientists — that is, not the older Los Alamos and MIT Radiation Laboratory alumni — involved in advising the government. It was established in 1960 and has somewhere between 30 and 60 members.

For administrative purposes, Jason's activities are run through the MITRE Corporation, a non-profit corporation in McLean, Virginia that contracts with the defense department.

The name "JASON" is sometimes explained as an acronym, standing either for "July-August-September-October-November", the months in which the group would typically meet; or, tongue-in-cheek, for "Junior Achiever, Somewhat Older Now". But neither explanation is right and in fact, the name is not an acronym at all. It's simply a reference to the Greek myth, Jason. The wife of one of the founders (Mildred Goldberger) thought the name given by the defense department, Project Sunrise, was unimaginative and suggested the group be named for a hero and his search.

Jason studies have included a now-mothballed system for communicating with submarines using extremely long radio waves (Project Seafarer, Project Sanguine); an astronomical technique for overcoming the atmosphere's distortion; the many problems of missile defense; technologies for verifying compliance with treaties banning nuclear tests; and most controversially, during the Vietnam War, a system of computer-linked sensors that became the precursor to the electronic battlefield.

Membership
Jason members all have security clearances and consist of physicists, biologists, chemists, oceanographers, mathematicians, and computer scientists. They are selected for their scientific brilliance, and over the years, have included eleven Nobel Prize laureates and several dozen members of the National Academy of Science.

The following is a list of members, past and present, who have been publicly identified as Jasons or whose names appear as authors on Jason studies. Since not all study authors are members of Jason, and since Jason does not give out its membership list, the only way to verify the following list is to ask the individual Jasons.