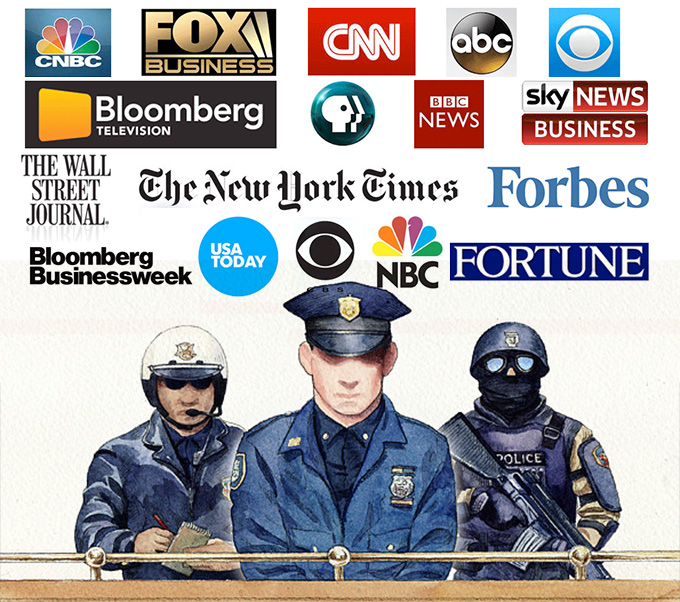 Yesterday afternoon, a 28-year-old black thug named Ismaaiyl Brinsley shot two police officers to death in the Bedford-Stuyvesant area of Brooklyn. In Internet postings earlier that day, he said he was going to kill policemen to avenge the deaths of Eric Garner and Michael Brown: “They Take 1 Of Ours . . . Let’s Take 2 of Theirs.” The two officers probably never even saw Brinsely before he shot them from behind. He then ran into a subway station, where he shot himself when he saw cops coming. One local who walked up to the crime scene later said that “a lot of people were clapping and laughing,” saying “serves them right.”

Ismaaiyl Brinsley pulled the trigger, but those two officers were just as surely murdered by the media. From the start, the American and world press have treated two cases of unfortunate but by-the-book police work as if they were acts of vicious racism that discredit every American police department.

Not one major media organization–tell us if we missed something–ever stated that it was not police error or bias but the lawless actions of Brown and Garner that killed them. Not one major media organization ever pointed out that white criminals who attack the police or resist arrest get rough treatment, too, and that there is nothing in either incident to suggest race mattered to the officers at all. The press helped whip up an atmosphere of hateful self-righteousness in which even the most obvious facts were brushed aside with mindless chants of “Hands up,” and “I can’t breathe.” The press treated thugs and simpletons as if they were servants of a noble cause. If the media had not fueled this hysteria, those two New York cops would still be alive.

The Economist is one of the most widely read and respected magazines in the world. Here is how it helped kill those officers in a cover article called “America’s Police on Trial:”

First, Michael Brown, a black teenager was shot dead in murky circumstances in Ferguson, Missouri, just after he robbed a shop, and then Eric Garner, a harmless middle-aged black man guilty only of selling single cigarettes on the streets of New York, was choked to death by a policeman while five cops watched . . . . 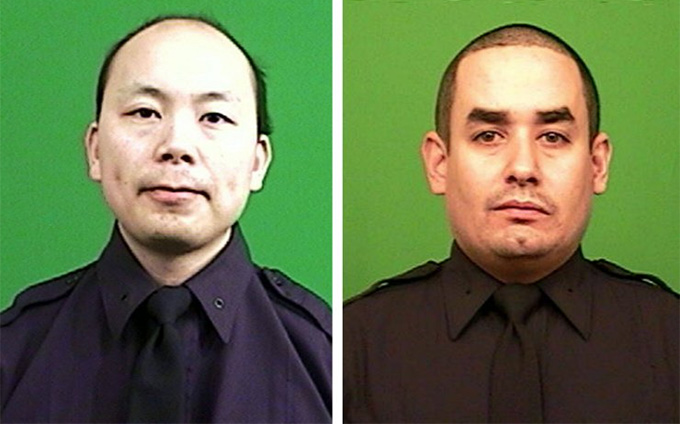 Thousands of pages of grand jury testimony in the “murky” Brown case were available if The Economist had wanted to read them. And there is nothing “murky” about what happens if you attack a police officer and try to take his gun.

But what The Economist says about Garner is even more criminal. He was not guilty merely of selling untaxed cigarettes on the street–a crime for which he had been arrested eight times before. He was violently resisting arrest, which is a felony. Nor was he “choked to death.”

He weighed 350 pounds, which is obese even for someone who is 6-feet 3-inches tall. He had asthma so severe he couldn’t walk a block without stopping to rest. He had heart disease and diabetes. He didn’t even die at the scene. He had a cardiac arrest in the ambulance that was taking him to the hospital. The New York City medical examiner’s office said Garner died because of “compression of chest and prone positioning during physical restraint by police.” He was probably having a hard time breathing because of his asthma, and if the officer had really been choking him he couldn’t have spoken a word.

And what about those five cops who stood and watched? The arrest was ordered by a black officer and supervised by a black sergeant. And the grand jury that refused to indict the officer? Nine of the 23 members were non-white and at least five were black.

The Economist’s scurrilous account of the arrest makes it sound as though Garner’s wife was right to say that “it was like a modern-day lynching. They had it out for him.” This is typical of the contemptible reporting that has now left two police officers dead.

Of course, politicians played their part. Eric Holder couldn’t even wait for his own investigation of the Ferguson police department to finish before saying the town’s policing needed “wholesale change.” And, of course, he has ordered a federal investigation of Garner’s death, too. Nothing a black attorney general could do shows greater contempt for white officers than to send the feds sniffing for racism despite full local investigations and formal grand jury proceedings that have found the officers acted properly.

New York Mayor Bill de Blasio also made police furious when he sympathized with demonstrators after Garner’s death, and said his mulatto son had to be especially careful around the police. Now, of course, he is wailing that the shootings are “an attack on all of us. . . . an attack on everything we hold dear.” 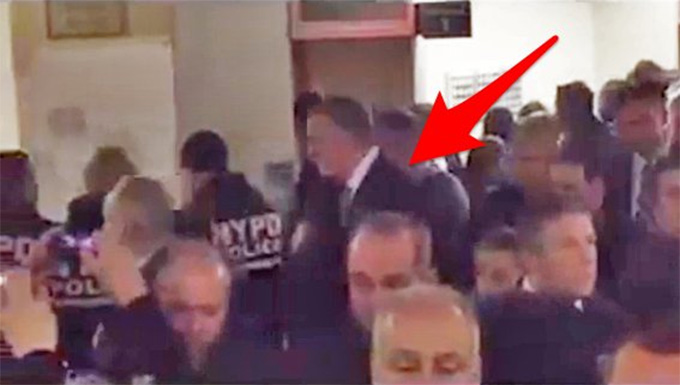 turned their backs on him at a news conference after the killings. When the mayor told police, “We’re all in this together,” one shot back, “No, we’re not.” Police unions were already circulating a letter for officers who want to tell the mayor to stay away from the funeral if they die in the line of duty. Now they are even more explicit. The heads of both the Patrolmen’s Benevolent Association and the Sergeants Benevolent Association have told Mr. de Blasio he has blood on his hands. Even a former New York governor George Pataki showed a little spine, calling the killings “a predictable outcome of divisive anti-cop rhetoric” from Mr. Holder and Mr. de Blasio.

Al Shaprton put on an even more sickening performance than the mayor. He claimed to be “outraged,” and insisted that “any use of the names of Eric Garner and Michael Brown, in connection with any violence or killing of police, is reprehensible.” But isn’t this the logical outcome of his favorite slogans: “No justice, no peace” and “By any means necessary”? He was strangely silent when blacks chanted “What do we want? Dead cops,” in New York a few days ago.

New York City’s policemen are right to despise Bill de Blasio, but it is the media that make the country a madhouse. If they had reported the Brown and Garner incidents correctly there would have been little fuss. If they had not glorified demonstrators there would have been only a few of them. But the press is addicted to self-righteousness, and nothing feeds its addiction like lurid tales of “racism.” The media are so eager to slay “racist” dragons that they turn ordinary police work into frothing bigotry, and assume that the “racism” they claim to detect in a few cops is widespread. Bad white cops are everywhere.

And Americans are so desperate for their own doses of self-righteousness that they utterly ignore the facts and make fools of themselves waving idiotic placards and staging “die-ins.” It is hard to think of another moment in American history when the bald, obvious facts made so little difference. Maybe it’s even a moment in world history. 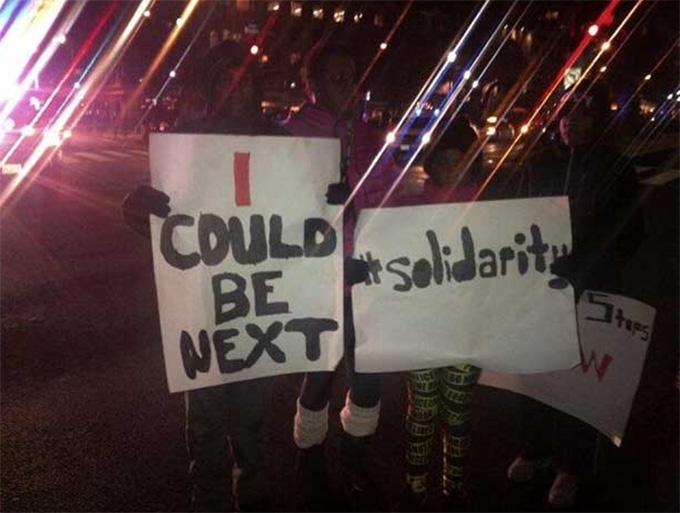 Last Monday, in Sydney, Australia, yet another crazed Muslim took hostages and waved the black flag of jihad. Before the incident was even over, Australians were falling over themselves reminding each other that this had nothing to do with Islam, that this was the work of a lone madman, that there was no pattern, and that any generalization about Arabs or Muslims would be loathsome. While the hostages were still cowering in fear, whites started an “I’ll ride with you” movement of volunteers to escort Muslims and protect them from the nasty backlash that would surely come. The insanity of white people, in other words, is worldwide.

All it takes is a few white policemen wrongly accused of “racism” and The Economist decides it’s time to call the entire American system of justice “deeply flawed.” But how many Muslims have to go on Allah-inspired rampages before we realize that Islam itself is a plague?

The media are as much a symptom as they are a cause. They are simply one of the sickest parts of an entire society that is sick. But they are so obviously sick that they can fool fewer and fewer people–as Bill de Blasio will find if he tries to attend a police funeral any time soon.