The Miracle of Directed Energy Technology on 9/11

The fabric of the human mind is flexible, but the strings of credulity can only stretch out so far, and then incredulity settles in. The New York Times reports today that Pope Francis will visit the National September 11 Memorial Museum at Ground Zero in NYC, and view its exhibits. 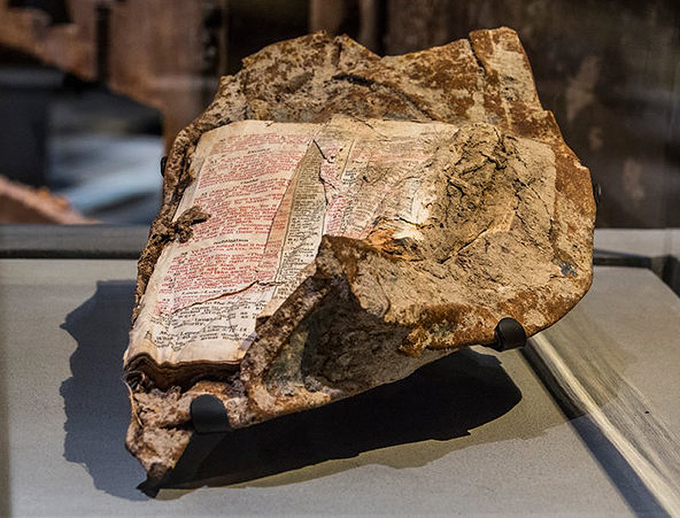 The image above depicts an artifact residing in the 9/11 Museum of an open Bible fused to a hunk of steel wreckage, with some of the steel overlapping the pages after it was softened by extremely high heat, or some other process. How could this happen and not have burned the paper? Was it a miracle? Is such a thing even possible in the physical world? And yet, the result can clearly be seen. 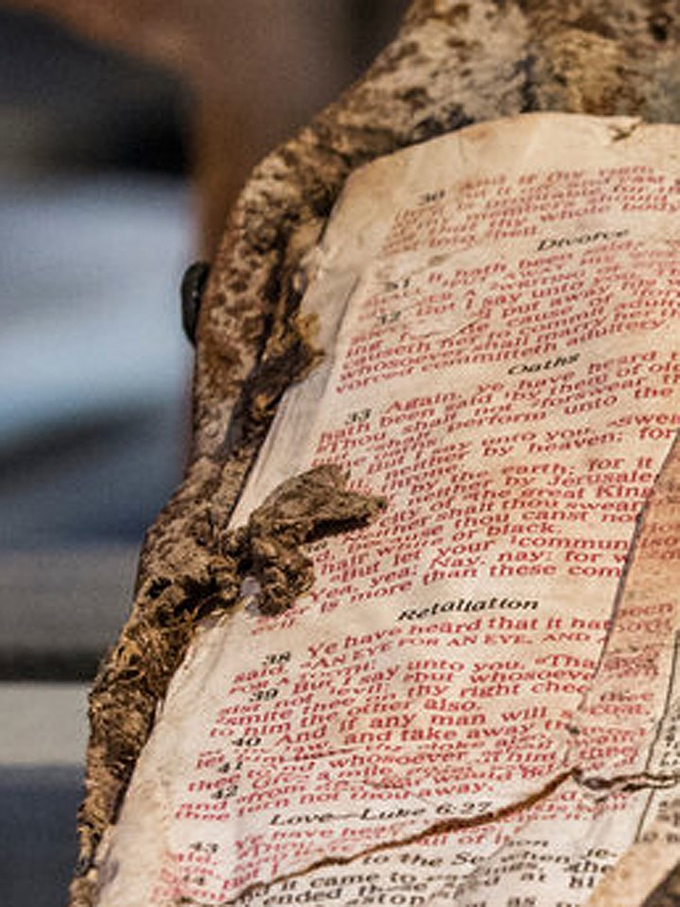 When shown this artifact of the bible fused with steel, will the pontiff proclaim it a miracle? Will he designate it as a holy relic? Or, will he state: “This is impossible! Bible paper burns at 451 degrees Fahrenheit, just like Ray Bradbury wrote about in his book.” The autoignition point of paper has a range of from 440 – 470°F, depending on the type of paper. Steel melts at 2500°F. When the pope inspects the opened bible paper fused to the steel, will he find burnt paper, or even any scorch marks? No, not if his eyesight is corrected to 20/20.

Bible paper, of low acid content and thin manufacture is very combustible. Soldiers during World War II, when out of cigarettes or rolling papers, would tear pages from their pocket New Testaments and use the thin paper to roll their cigarettes from loose tobacco and the makeshift papers proved burn evenly.

How then, did this artifact of bible pages become “fused” with steel, without the paper combusting into a blackened mass of ashes? Thanks to the pope and his visit to New York City, much needed attention will be brought upon this anomalous artifact, which could prove successful in helping to solve the puzzle of the destructive process at work on 9/11. 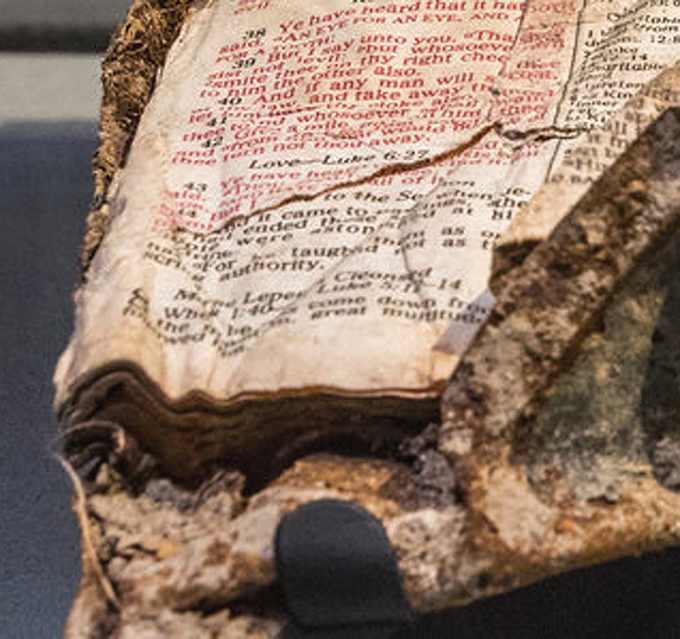 Revisit that day, and remember all the images of showers of paper floating down through the air and scattering all over the sidewalks and streets, when the towers were destroyed. These papers were intact and surely not burned. What process was at work that could turn steel and concrete towers to dust, and yet not affect paper?

A process used in directed energy technology can cause a dissociation and alteration of the molecular structure of metal, to fuse with combustible objects and appear as if the materials melted together, but with no discernable evidence of heat or combustion.

So evidently, a technology exists which can accomplish those results, the results seen in the bible papers fused to the metal, steel. This is not a miracle, other than this technology being able to appear miraculous to most people. Arthur C. Clarke once opined: “Any sufficiently advanced technology is indistinguishable from magic.” Other forces were at work the day of 9/11, other than magic or the hand of the Divine..

Very much related to this anomalous artifact in the 9/11 Museum, is another one found in the ruins of an almost forgotten and seldom mentioned building which was immediately destroyed on the morning of 9/11,
St. Nicholas Greek Orthodox church, just across the street from the southside of the South Tower, or WTC-2. When retrieval of the relics in the church was undertaken in the following days, only a few pieces survived.. and one find was called a miracle. 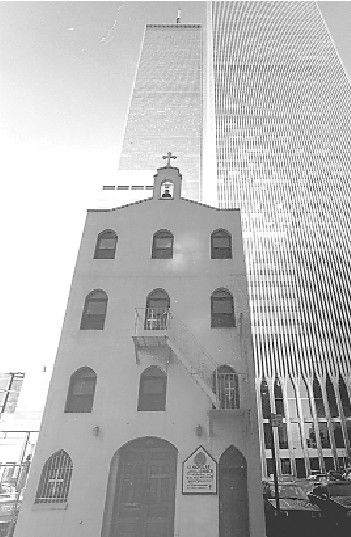 “The great miracle, [...] was the recovery of an icon of St. Spyridon. The silver around the icon had melted, but the paper icon had not been burnt.” 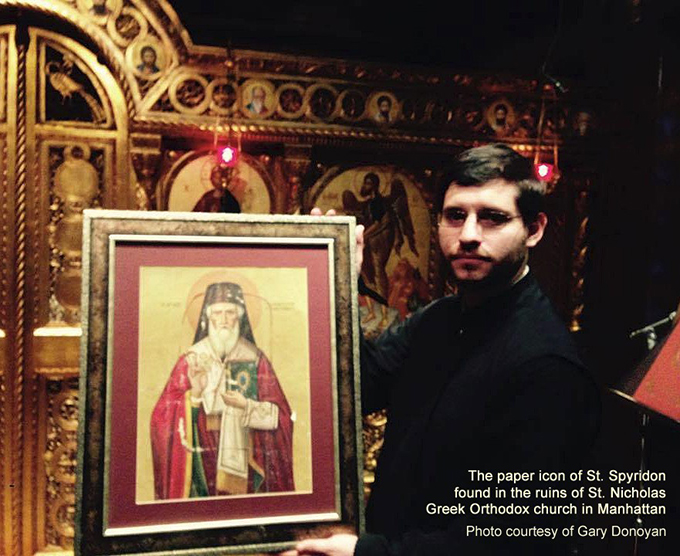 This discovery was one of the church’s most holy relics, and it was declared a miracle because the silver onlay applied to a paper icon of St. Spyridon had “burned off”, leaving the paper intact and unscorched. The melting point of silver is 1,763°F.

So, will Pope Francis also, like the Greek Orthodox Archbishop Demetrios, declare the bible paper fused to steel artifact a holy relic, and now, a miracle? Or, will he assign responsibility to the science? Or, would he rather the unknown science of directed energy technology remain unknown, and suppressed?

Probably the best collection of evidence making the case for a directed energy technology at work and used as a weapon on 9/11, can be found at the website of a mechanical engineer named Judy Wood, Ph.D - and in her landmark book: ”Where Did The Towers Go?”.