"The Queen" : Why Movies Lie 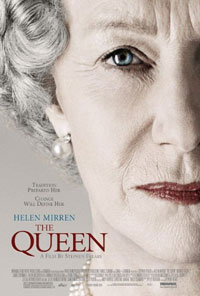 "The Queen" illustrates how the public is lulled to sleep with Mother Goose stories.

The drama rests entirely on Queen Elizabeth II's refusal to speak publicly after the death of Princess Diana in 1997; and how, under pressure from a grieving nation, she graciously rose to the occasion.

Nominated for "Best Picture," the movie doesn’t mention she had good reason to be reticent. Helen Mirren won for "Best Actress" but if Mohammed Fayed is right, Elizabeth II deserves the Oscar.

She may have orchestrated the hit with her husband and son. "I want Charles and Philip together in court." the father of Diana's fiance said recently. "These are the people who ordered the murder."

Now that would have been a movie!

However in this movie, Elizabeth's excuse is she wishes to "suffer silently and with dignity" and "focus on her grandsons' suffering." The tensions between the Princess and the House of Windsor are only implied.

The movie is comforting. Elizabeth II really is a good person, not the front for the world's greatest criminal syndicate, dealing in drugs, arms, prostitution and banking, according to Lyndon LaRouche's book "Dope, Inc." (1992.)

Philip is Grand Master of the United Grand Lodge of Freemasons of England.

After seeing "The Queen," I left the cinema feeling with Robert Browning, "God is in His Heaven and all is right with the world."

Our leaders are decent people trying to do what's right! The old ladies in the audience shouted, "pip, pip" when Elizabeth finally saw the light. "Well done, your majesty!"

However, in the case of murder we always ask, "Who Benefits?"

After the divorce of Charles and Diana in 1991, The London Daily Mail emphasized England "now has effectively two Royal Houses—the House of Charles and the House of Diana. In the first five months of separation, Princess Diana attracted five times as many spectators, twice as many reporters, and more than twice as many photographers than her husband." (Peter Fearon, "Buckingham Babylon" p. 372)

Diana's death looks like an old fashioned Mafia hit, a British dynastic spat. Didn't Queen Elizabeth I  have Mary Stuart beheaded in 1587? Diana threatened the family business and she had to be rubbed out.

According to "This is London" (March 2) "Mr. Fayed has been implacable in his insistence that Prince Philip 'masterminded' the couples' death. He says Dodi and Diana planned to marry but the British establishment could not accept the prospect of the mother of a future king marrying a Muslim."

Or giving him a Muslim half-brother? There were rumors she was pregnant. Diana expressed fears that Charles would use MI-6 to arrange a car crash. There is evidence this is exactly what happened.

Imagine if this movie revealed the truth instead of covered it up?

Movies for the Lower Degrees
"In pre-movie days the business of peddling lies about life was spotty and organized." Ben Hecht, a veteran screenwriter wrote. Since then, "One basic [movie] plot only has appeared daily...the triumph of virtue and the overthrow of wickedness.... (A Child of the Century, p. 468)

But, in real life, the bad guys have overthrown virtue. The Cabbalist central banking mob finagled control over national credit and is consolidating this advantage into world tyranny. They fund the movies that deceive, distract and debilitate the boobs while they advance toward their goal.

Society as a whole is organized like a secret society (i.e. Freemasonry, Communism, Zionism, Feminism.). Most members are not told the real agenda. They are easier to manipulate with idealistic sounding platitudes about freedom and righteousness. The function of the mass media and education: is to lie; to reinforce the official illusion: how things "are supposed to be."

[In a famous interview with Sarah McClendon in December 1992, George Bush Sr. admitted: "Sarah, if the American people had ever known the truth about what we Bushes have done to this nation, we would be chased down in the streets and lynched."]

To be duped (by some Cause) is probably the characteristic modern human experience, but of course few know it. Even those who rise in the NWO Masonic conspiracy are often "useful idiots" who provide a convincing facade.

James Forrestal, for example, was an investment banker who became Truman's Secretary of Defense. When he realized the Masonic bankers controlled Communism as well as Capitalism,  he couldn’t keep quiet. He was deemed "insane" and thrown from the window of Bethesda Naval Hospital. He was a good guy. He lost. There are no movies about him. Joe McCarthy was probably murdered at the same hospital a few years later.

"Treason doth never prosper: what's the reason?
For if it prosper, none dare call it treason."

Richard Nixon eventually realized the same thing and wanted to take back the USA. The CIA used The Washington Post and Watergate to impeach him. Yet the movie "All the President's Men" tells a cock-and-bull story about the press bringing down a corrupt ruler. The truth – a political hack who reaches for greatness by defying the Rockefellers--would have been wonderful. Even Oliver Stone missed this story in his "Nixon."

Have you seen an honest movie about the murder of George Patton or Huey Long? One about 9-11? What about Margie Shroedinger, the woman who sued G.W. Bush for rape and then "committed suicide" ? There are dozens of "good guys" murdered during the Clinton Administration. Each one would make a great movie.

[At the 1991 Bilderberg meeting, David Rockefeller thanked the media for covering up elite plans for the "supranational sovereignty of an intellectual elite and world bankers."  “It would have been impossible for us to develop our plan for the world if we had been subjected to the lights of publicity during those years."]

"News" and "Entertainment" are the main reason for our collective arrested development. They define reality, past and present.

We depend on them for guidance and inspiration. Yes there are good movies but most fit the description above. Hopefully the Internet will provide entertainment that nurtures rather than enslaves.
-----
Google Video --Tony Blair and British Freemasonry