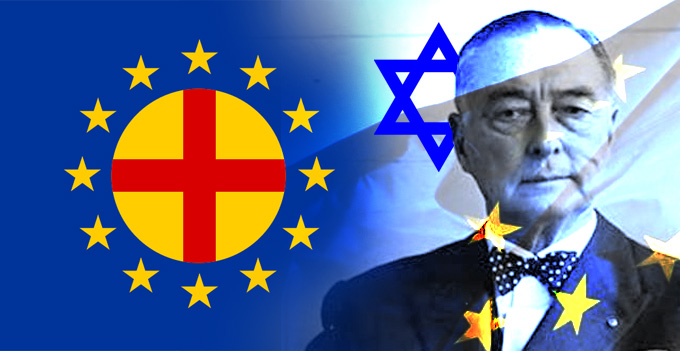 The following article is from balder.org and gives an in depth description of the man who is responsible for setting in motion the idea of a European Union, Count Richard Nicolaus Coudenhove Kalergi.

It’s taken from his own book Practical Idealism and shows that he has a racist ideaology of Jewish supremacy and that he is calling for the erradication of the native European races.

The following is from balder.org:

Numbers in square brackets: [12] refer to pages in the original book / the downloadable pdf-document. A few headings which are not part of the original text have been inserted by me. Comments in square brackets are also mine. I have tried to follow the original - somewhat archaic, and in some places a bit hard to read - German text as closely as possible. I also invite others to translate the text into other languages and send me their translated text for publication on my website. Europeans have a right to this information. 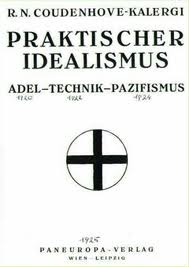 The man of the future will be a mongrel. Today’s races and classes will disappear owing to the disappearing of space, time, and prejudice.

The Eurasian-Negroid race of the future, similar in its outward appearance to the Ancient Egyptians, will replace the diversity of peoples with a diversity of individuals. [22]

Almost all of European ethics are rooted in Jewry. All protagonists for a religious or non religious Christian morality, from Augustine to Rousseau, Kant and Tolstoy, were Jews of choice [Wahljuden] in a spiritual sense. Nietzsche is the only non Jew, the only European heathen moralist.

In the East the Chinese people are the ethical par excellence [..] - in the West it is the Jews.

God was the head of state of the ancient Jews, their moral laws civil law, sin was crime.

Through the ages Jewry has remained faithful to the theocratic idea of the identification of politics and ethics: Christianity and Socialism are both attempts to create an earthly paradise. [lit.: a State of God]

Two thousand years ago, the ancient Christians - not the Pharisees and Sadducees - were the revivers of the Mosaic tradition; today it is neither the Zionists nor the Christians, but the Jewish leaders of Socialism: because they wish, with the most exalted unselfishness, to erase the original sin of capitalism, to free the people from injustice, violence and subservience and to change the redeemed world into an earthly paradise. [27]

From Moses to Weininger ethics have been the main problem for Jewish philosophy.

In this ethical basic attitude to the world lies one origin of the exceptional greatness of the Jewish people - at the same time also the danger that Jews who have forgotten their belief in the ethics sink to become cynical egoists: while people with another mentality - even after losing their ethical attitude - still retain some amount of chivalrous values and prejudices (man of honor, gentleman, cavalier etc.), which protects them from the fall into the abyss of values. 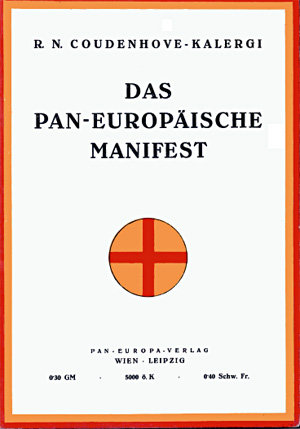 What mainly separates the Jews from the average city dwellers is the fact that they are inbred people.

Strength of character paired with sharpness of the mind predestinates the Jews in their most excellent specimen to become the leaders of urbane humanity, from the false to the genuine spiritual aristocrats to the protagonists of capitalism as well as of the revolution. [28]

Now we stand at the threshold of the third epoch of the new times: Socialism.

Also socialism is supported by the urban class of industrial workers, led by the aristocracy of revolutionary writers.

This development, and with it the chaos of modern politics will only then find its end, when a spiritual aristocracy seizes the means of power of society: [gun] powder, gold, ink, and use them for the blessing of the general public. [32]

Russian Bolshevism constitutes a decisive step towards this purpose where a small group of communist spiritual aristocrats govern the country and consciously break with the plutocratic [plutocratic = rule or power through wealth] democratism which nowadays controls the rest of the world.

The fight between Capitalism and Communism over the inheritance of the beseeched blood aristocracy is a fratricidal war of the victorious brain aristocracy, a fight between individualistic and socialist, egoist and altruist, heathen and Christian spirit.

The general staff of both parties is recruited from Europe’s spiritual leader race [Führerrasse] the Jews.

The highest challenge demands that aristocracy coincide with nobility, leader with example: that leadership falls to perfect people.

From the European quantity-people, who only belief in numbers, the mass, two quality races rise up: blood aristocracy and Jewry.

Separate from each other both of them stick to their belief in their higher mission, of their better blood, in the different ranks of the people.

As guarantee for a better future a small rest of the morally high standing rustic [country-style] aristocracy and a small battle group of revolutionary intelligentsia remains.

Here the conformity between Lenin, the man from the lower country aristocracy, and Trotsky, the Jewish literate grows into a symbol: here the contrasts in character and spirit, from squire and literate, from country dwellers and the urbane, heathen and Christian people join into a creative synthesis of revolutionary aristocracy.

One step foreword in the spiritual sense would suffice to place the best elements of blood nobility, who in the country have protected their physical and moral health from the depraving influence of the farm scent, at the service of the new liberation of the people.

For they are pre destined to this positioning by their traditional courage, their anti-bourgeois and anti-capitalist mentality, their responsibility, their contempt for material advantages, their stoic training of the will, their integrity, their idealism. [45]

Read the rest of this lenghty and in depth article at balder.orghere