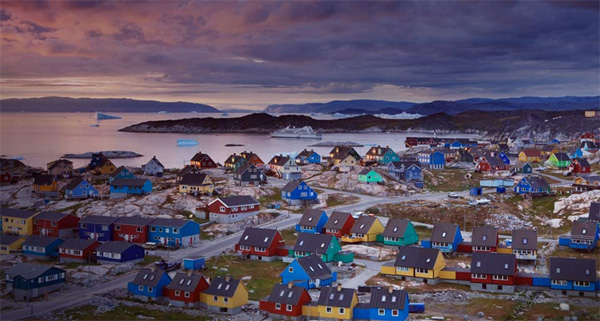 Residents of a town on the western coast of Greenland may have seen the sun peek over the horizon 48 hours earlier than its usual arrival on Jan. 13, sparking speculation, and disagreements, over possible causes.

The town of Ilulissat sits just above the Arctic Circle, meaning its residents had been without any sunlight for a good chunk of the winter, and traditionally they'd expect to see their "first sunrise" on Jan. 13.

News that the sun had peeked over the horizon on Jan. 11 appeared online in British and German-language publications and it appears to trace back to a story by the Greenland broadcasting company KNR that quotes residents who noticed the change.

Of about half a dozen scientists contacted, most were unaware of the report, which was circulating on the Internet. They offered a number of hypothetical explanations, including an illusion caused by an atmospheric effect and conflicting opinions about whether global warming might be to blame for melting along the edges of Greenland's ice sheet. With less ice, Greenland's elevation may take a dip such that the sun would have less distance to travel before appearing over the horizon.

The sun comes up each day because Earth rotates once on its axis every 24 hours or so. Seasons are a result of Earth being tilted 23.5 degrees on its spin axis coupled with the planet's 365-day orbit around the sun.

The Arctic Circle, a line at 66 degrees north, marks the latitude at which the sun does not set during the summer solstice (when the top half of our planet is facing directly toward the sun), the longest day of the year, nor rise during the shortest day of the year, the winter solstice. The farther north you move from the line, the longer the period of night-less summer or sun-less winter. Ilulissat is located about 3 degrees north of the Arctic Circle, so residents spend the middle of winter without any sunlight.

At the North Pole, the sun rises only once a year — at the start of spring. It gets higher in the sky each day until the summer solstice, then sinks but does not truly set until late September, at the autumn equinox.

Not a global phenomenon

While they disagreed on the cause of the town's early sunrise, experts did reach one consensus: This was an isolated event, not a sign of earlier spring around the Northern Hemisphere.

"In a nutshell, there can't be a change in the true sunrise, because that would require the Earth-Sun orbital parameters to change," said John Walsh, a professor of atmospheric science at the University of Alaska Fairbanks.

Fairbanks is located about 1 degree of latitude south of the Arctic Circle, far enough south that it does not completely lose its sun in winter, and this year the sun has followed its typical pattern in Alaska, he said.

"No changes here," he said. "We would have heard about it."

Walsh and other scientists agreed there is absolutely no evidence of a shift in the tilt of the Earth’s axis or any other change that might alter the arrival of the seasons around the globe.

Other causes can be ruled out, including the effect of the approaching leap year in 2012, since in and around leap years, the sun is slightly lower in the sky in the Northern Hemisphere around Jan. 11, according to Thomas Posch, of Austria's Institute of Astronomy.

The most likely possibility was the refraction of sunlight at the horizon, he told LiveScience in an e-mail. Most of the other scientists interviewed agreed this was the most likely culprit.

It is, in fact a common phenomenon, according to Walsh. Light bends as it travels through layers of air with different densities, and as a result the sun is normally a little bit below the horizon when we can first see it. But an unusual stratification of the air over Greenland could have led to a stronger bending of the sun's rays, making the sun appear to arrive earlier than usual, he wrote in an e-mail.

"It is well known that global warming is causing most of Greenland's outlet glaciers to melt faster and draw down the inland ice, and the details of that are quite complicated," said Tim Dixon, a professor of geodesy at the University of Southern Florida, who has studied the effects of the melting ice sheet that covers Greenland.

On average, the ice sheet has lost considerable mass over the last 10 to 15 years, he said.

Ilulissat is located on land next to the point where the Jakobshavn Isbrae outlet glacier meets the ocean. The outlet glacier is a long tongue of ice that drains from the main ice sheet to the west, through the coast into the water.

It is unlikely that the melting of the edge of the ice sheet would change the timing of the first sunrise, because the ice is east of the town, while the sunrise would take place almost due south.

Even so, Dixon did not completely dismiss melting ice as a cause, suggesting that perhaps the absence this year of a floating ice shelf in the inlet to the south may have allowed the sun to rise earlier.

But without information about the observations behind this report, it's difficult to speculate as to what may have caused an early sunrise, according to Richard Alley, a professor of geosciences at Pennsylvania State University who spent several days in the town.

"When my wife was a child, she and her siblings would go to the beach, watch the sun set, and then run up the hill really rapidly, 'unsetting' the sun so they then could watch the sun set again," Alley wrote in an e-mail to LiveScience. "Where you are matters."

Given the information available, or lack of it, Alley said the possibility of a "mirage" where atmospheric conditions make it possible to see something that would not normally be visible was more likely, he wrote.

But he wrote that he was concerned about the reliability of the report.