"The Truth About Enki" 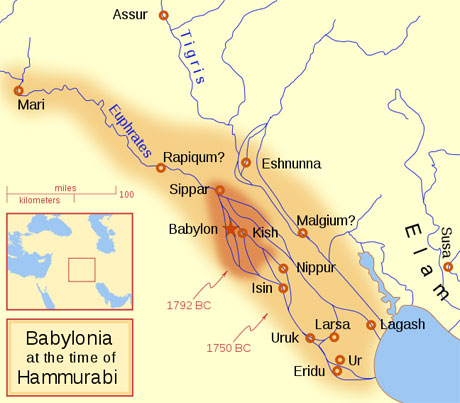 Nippur, Administrative Center of Enlil
This was the city dedicated to Enlil and where he ruled from his Ekut or "house on the mountain." At Nippur, Enlil exercised supreme command over all the Anunnaki on Earth before the Deluge. One of the hymns dedicated to him provides a graphic description of a control center bristling with communications and other electronic equipment scanning the horizons. From the Ekur, it was said that Enlil's "eye scans the land" and "his lifted beam searches the heart of all the lands." 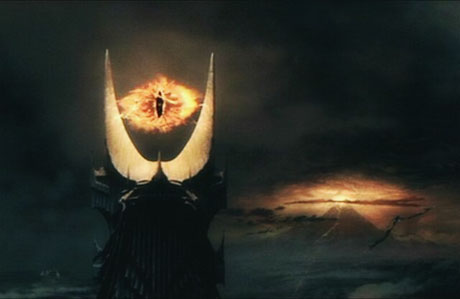 Eye of Enlil
Nippur was rebuilt after the Deluge as his sacred city. It is also the city where, according to the "Third Book of Enoch" that the Lord kept his "Shekinah" or space craft, at the entrance of the Garden of Eden until the days of Enoch when he abruptly left for his heavenly abode, never to return except on special occasions. It was also at Nippur, at the River Chebar, that Ezekiel first saw the "fiery chariot" which is described so vividly in the "Book of Ezekiel." 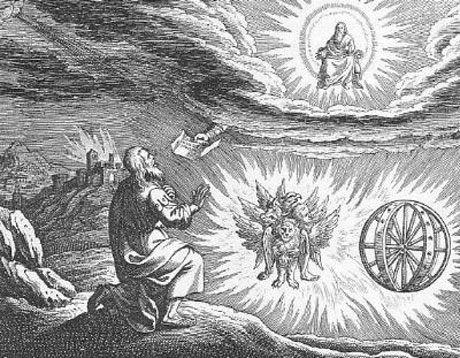 The Abzu or Floating Palace of Enki

AB-ZU, or Apsu in Akkadian, is derived from the combination of AB or AP meaning "the father, the creator, or the great one" and ZU or SU meaning "one who know, the wise one," thus suggesting it was the source of all wisdom and knowledge. The Abzu seems to have had three different meanings to the Mesopotamians, depending on the time period or era which the tablets refer to.

Originally Abzu was the term for our Sun. In the Sumerian creation myth which deals with the formation of the universe, the Abzu is called the "primeval one" and the "begetter" of the planets of our solar system.
Later when the Anunnaki had arrived here and began to set up operations, the Abzu is clearly the abode of Enki located near the city of Eridu. After the Deluge, the meaning takes on sinister connotations. It becomes "the deep" from whence the Greek word "abyssos" and the modern "abyss," and refers to the nether world, presumably to the ancient mines. Mining does not seem to be the main preoccupation of the post-diluvian period. While they may still have been operational, and worked on a limited basis by a prison population, they had become mainly a place of detention.

Following the Deluge, the South African gold mines fell into disuse. Then the Pyramid Wars further complicated this situation. Duke Nergal was removed from his position as Head Panhandler and was replaced by Prince Enki, who moved the whole operation to the Lake Titicaca/Nazca area of Peru. This move was also forced by the fact that Prince Utu, the secret lover and chief ally of Princess-Royal Inanna in the Pyramid Wars, blew up the Sinai Spaceport to aid her struggle with the villainous Baron Marduk and his consort, the wicked Baroness Sarpanit. These latter two were known in Ancient Egypt as Amon-Ra and Nut-Bast and in Ancient Greece as Belus and Anchinoe.

Enki on the Cube Throne

It is the second meaning, that of the floating headquarters of Enki, that pervades the literature relating to the antediluvian days. In the myth "Enki and the World Order," one of the longest and best preserved of the narrative poems, the Abzu of Eridu is described as a splendid shrine, nestled among the shade trees filled with birds and navigable canals stocked with fish.

In this Eden-like garden, Enki takes pleasure trips over the marshland and canals in his MAGUR type boat which he refers to as "the Ibex of the Abzu." This ship is presumably some sort of small runabout as MA-GUR means "ship to turn about in." The ibex is an allusion to the wild goat of the surrounding mountains and is often used to represent the person of Enki on cylinder seals and statuettes. Probably the most beautiful of these is the statue of the Ibes peering through a shrub, found in the royal palace at Ur and dated to about 2500 BC. Lavishly done in gold and lapis lazuli, it shows a winged ibex peering through a shrub which represents the "Tree of Life" or immortality. 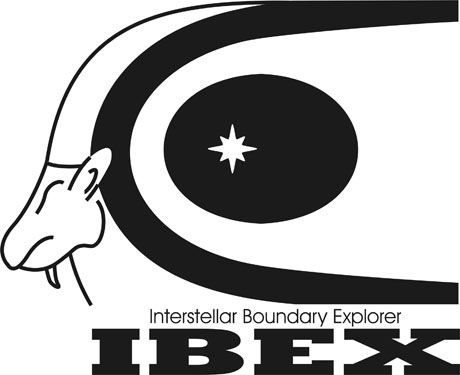 (A list subscriber recently emailed me, asking where these "g--s" go when they "die," since ultra-hunky Adonis Duke Dumuzi, the public lover of the troublemaker Princess-Royal Inanna, was murdered by Baron Marduk during the Pyramid Wars. I don't know what happens to them. Duke Dumuzi, as far as I know, is the only one who has ever been deprived of life. The rest of these Saurian G--s drink of an elixir which confers "eternal life," as long as they continue to drink it. That is why they absolutely would not allow the hybrids Adamu and Eva to get their hands on it. They did not want "us" to attain the status of "immortal g--s." Is this weird, or what . . . ?)

Enki is often depicted as residing in this Abzu or "water palace." A cylinder seal of about 2000 BC shows it as his home surrounded by water. It was probably a sealed mobile craft as well, as indicated in the "Gilgamesh Epic" where Utnapishtim, the Babylonian Noah, is told to seal his ark thoroughly in order to make it waterproof. "Like the Abzu thou shall seal her," he is told. The Abzu thus appears to be sealed like a ship and probably was submersible as well. Before Enki built the first city of Eridu, he resided in the Abzu which apparently had descended from the orbiting space ship to settle in the swamps of Mesopotamia. Presumably, it was of such a configuration that it could fly and was submersible as well. In this respect, there is an interesting comparison to the configuration of the Ark of Noah as described below (Chapter 13).

Enki (Ea) stands in his "watery home" the Apsu

Enki as the Oannes of Babylonian Legends

The traditions of ancient Mesopotamia recount the story of an amphibious ancestor who taught the arts and crafts of civilization to Mankind. Written in the Third Century BC by the Babylonian priest Berossus, it describes the origins of civilization as his forefathers believed it. Although the works of Berossus have been lost, many fragments have been preserved by a number of contemporary writers such as Apollodorus, Aleksander Polyhistor, and Abydens, one of Aristotle's disciples who also wrote an Assyrian history of his own, now lost. The account speaks of a group of creatures who came out of the Persian Gulf called "Annedoti" led by one Oannes. They reportedly were amphibious creatures with the head of a man, the body and tail of a fish, yet legged like a man. Led by Oannes, these creatures taught man all of the ancient knowledge. According to the legend, Oannes instructed Man how to build cities, to found temples, to compile laws, to survey the lands, and how to grow food. He also taught them mathematics, the sciences, and every kind of art.

Apollodorus referred to Oannes and the Annedoti as "Musarus." The word "musarus" means "an abomination" in Greek just as "annedoti" means "the repulsive ones." In other words, the creatures credited with founding civilization were frankly described by the ancient Babylonian people, who revered them, as "repulsive abominations." If the tradition had been invented, a more normal attitude would be to glorify these creatures as splendid g--s and heroes. Yet the fact that they chose to describe their ancestors this way argues for the authenticity of the account. It was the Babylonian tradition that they owed their knowledge to creatures who came up from the sea who were disgusting and loathsome to gaze upon. Of further significance is that the Oannes of Berossus and Apollodorus bears a striking resemblance to the Sumerian Enki who founded the Mesopotamian civilization and brought civilized arts and sciences to mankind. Enki lived in his water palace or Abzu located on the edge of the Persian Gulf. Enki's Abzu was sealed and was presumably submersible. Oannes was said to return to his watery abode in the evening to spend the night.

Even the name Annedoti is quite similar to the poeople of Enki – the Anunnaki, from whence it was probably derived. The Greek term may have originated with the Sumerians and was later carried over as a description of a race that was both retilian and loathsome. When our saurian ancestors arrived here to exploit the resources of this planet, they must have found the physical conditions here ideal for living, perhaps very similar to those of their home planet. What were these conditions that were so compatible to the alien race that came here hundreds of thousands of years ago?

(BTW, R. A. Boulay wrote this book in 1990. It is now out of print, and Boulay himself is deceased - thus the reason for my transcribing it here. Boulay worked for the Defense Intelligence Agency in a top-secret position. After his retirement, he decided to abrogate his security clearance in order to tell the world all that he had learned as an employee of the DIA. Hence, this book. I hope that you can appreciate the fact that our government does indeed know all about these "Saurian G--s")