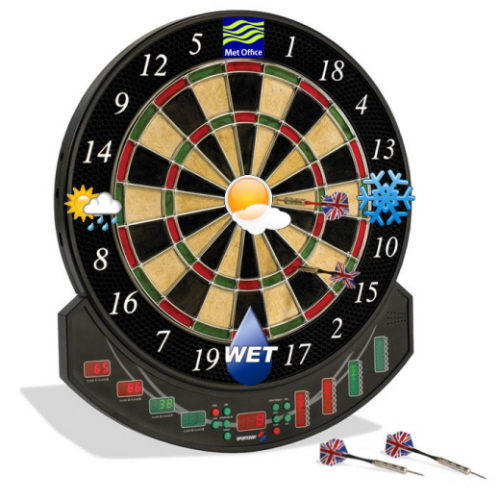 One of my personal favourite Comedy Moments of 2009 came in the unlikely context of a BBC Radio 5 Live debate on climate change. The female presenter, as we’ve come to expect of the BBC, was quite shamelessly biased towards the Warmist camp, but this apparently wasn’t enough for the show’s resident weatherman. When his turn came to read the weather, he instead chose to deliver an impromptu homily on the seriousness of Anthropogenic Global Warming. I forget the exact words but his speech began something like: “Well I work for the Met Office and I’d just like to say….”

Dear, oh dear. The poor chap. I fear the time will soon come – if it hasn’t already – when the phrase “I work for the Met Office” will command about as much respect as “I was in charge of the New Orleans levee defences in the run-up to Katrina” or “I’m head of security at Lagos International Airport.” The UK Meteorological Office – established in 1854 – is supposed to be Britain’s greatest authority on forecasting the weather. So how come these days its predictions are so risibly inaccurate you’d probably be better off consulting tea leaves or cock entrails?

We all remember (with some bitterness) the glaring contrast between the Met Office’s rosy prediction of a “barbecue summer” and the chilly wash-out we actually experienced. This month, you may have noticed, they’ve screwed up yet again. A “mild winter” was what the Met Office promised us. But a “mild winter” (clue: notice how many fewer toes you have than you did in June) is what we definitely haven’t got. This has not, of course, prevented the Met Office coming up with one of its characteristic “even though we’re wrong we’re right” defences:

A Met Office spokesman said: “That forecast was dealing with the whole of the winter. December has certainly been cold but the prediction is for December, January and February.”

He believed the “climate team” was updating the prediction “perhaps over the course of the next week.”

The spokesman added: “It has certainly been a cold winter so far in most parts but the seasonal forecast has not been proven one way or the other.”

He said the weather was expected to remain cold for “the next week or so” but he could not comment on the longer term.

Interesting that “could not comment on the longer term” bit. Normally, this is the Met Office’s prime speciality. It may not be able to tell us with any reliability what the weather is going to be like next weekend. But ask it to predict what global climate is going to be up to in 50 or a 100 years time and its prescience is truly uncanny. It’s going to be warmer, apparently. Much, much warmer. With drastically risen sea levels. Melted glaciers and ice caps. Ravening packs of emaciated polar bears cruising the world on diminishing ice floes. etc.

How does the Met Office know this? Because it’s on a mission, that’s why. Visit its website and you’ll quickly appreciate how this supposedly authoritative and balanced taxpayer-funded body has become the most strident activist on behalf of the global climate-fear-promotion movement. According to the Met Office’s official climate change guide, computer models are “reliable”, the “overwhelming majority of scientists agree on the fundamentals of climate change”, human activity is a major driver of climate change and the Urban Heat Island Effect is an urban myth.

The rot set in under its former director Sir John Houghton, a man so fanatically committed to the idea of man-made global warming that he once likened it to “a weapon of mass destruction”. As Christopher Booker reports in The Real Global Warming Disaster, Houghton not only chaired the first IPCC working group on assessing the “scientific information on climate change” but also established in 1990 the Hadley Centre for Climate Prediction and Research. In conjunction with the Climatic Research Unit (CRU) – whose scientists and associates were so roundly discredited in the Climategate scandal – the Hadley Centre provides one of the four main datasets (HadCrut) used by the IPCC for its increasingly hysterical predictions of man-made climate disaster.

With friends like that, is it any wonder that the Met Office gets it so wrong so very often? Its computer models, like those of the IPCC, are so thoroughly committed to the idea of Man-Made Global Warming that they continue to predict it regardless of all evidence to the contrary from real-world thermometers. If it weren’t so depressing – the Met Office, after all, plays a key role in informing public policy and therefore, in how your money is to be wasted by the government of the day (be it run by Green Gordon or Green Dave the disaster will be just as great) – it would almost be funny.

In fact it is funny, as this glorious Independent article dug up by Richard North reminds us. It was written in March 2000 and has various “experts” explaining how very soon in Northern Europe, the sight of winter snow will almost be as unfamiliar as marauding packs of wolves.

Sledges, snowmen, snowballs and the excitement of waking to find that the stuff has settled outside are all a rapidly diminishing part of Britain’s culture, as warmer winters – which scientists are attributing to global climate change – produce not only fewer white Christmases, but fewer white Januaries and Februaries.

According to Dr David Viner, a senior research scientist at the climatic research unit (CRU) of the University of East Anglia,within a few years winter snowfall will become “a very rare and exciting event”.”Children just aren’t going to know what snow is,” he said.

Professor Jarich Oosten, an anthropologist at the University of Leiden in the Netherlands, says that even if we no longer see snow, it will remain culturally important.

“We don’t really have wolves in Europe any more, but they are still an important part of our culture and everyone knows what they look like,” he said.

David Parker, at the Hadley Centre for Climate Prediction and Research in Berkshire, says ultimately, British children could have only virtual experience of snow. Via the internet, they might wonder at polar scenes – or eventually “feel” virtual cold.

North contrasts it with this more recent article from the Daily Telegraph, predicting sub-zero temperatures and widespread snow showers over New Year. Let’s hope our kids make the most of this “very rare and exciting event”. If we believe the Met Office – and who could possibly not – it will almost certainly be their last chance ever to build a snowman in England’s green and increasingly subtropical land.