The Vultures Moving in on Libya 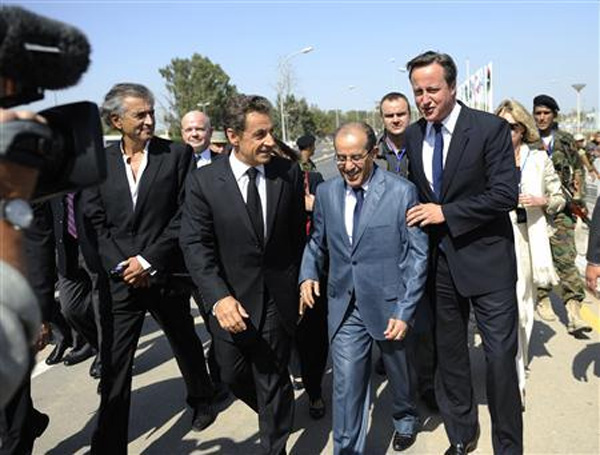 Listen to Red Ice Radio from From March 27, 2011 with Diana Johnstone - War on Libya: Perpretators & Manipulators

Britain cleared the way on Thursday for essential travel to the capital Tripoli and a number of other Libyan towns, lifting curbs that had held back businesses seeking to win contracts to rebuild the North Africa country.

The Foreign Office had previously advised against all travel to Libya and recommended that British nationals there leave because of the fighting between supporters and opponents of ousted leader Col. Muammar Gaddafi.

The move should pave the way for British businesses to start to move back into Libya. Contractors had been unwilling to defy travel restrictions and there had been fears that Britain could miss out on deals were the restrictions to persist.

The announcement coincided with a visit to Libya by Prime Minister David Cameron and French President Nicolas Sarkozy.

Foreign Secretary William Hague said in a statement he had decided to ease the travel recommendations in light of the improving security situation in the country, where interim government forces are besieging the last bastions of support for Gaddafi.

The Foreign Office said essential travel to Zuwara, Zawiyah, Tripoli, al Khums, Zlitan, Misrata, and the coastal towns from Ras Lanuf to the Egyptian border, including Benghazi, was now possible but it continued to advise against all travel to all other areas of Libya.

Libya: to King Sarkozy, the spoils

Move over, Lawrence of Arabia. The Great Gallic Liberator of Libya (and any other gullible Arab in sight), neo-Napoleonic French President Nicolas Sarkozy, along with his sidekick British Prime Minister David of Arabia Cameron, gallantly strode into a cordoned off military airport in Tripoli to sing La Vie en Rose by the Mediterranean, thus celebrating the success of the North Atlantic Treaty Organization’s long bombing of Libya into "democracy".

Tagging along for the photo-op was insufferable self-promoter and self-described "new philosopher" Bernard-Henri Levy, he of the perennially revealing torso under a neatly pressed white shirt, and he of the notorious phone call from Benghazi who "sold" a war to the beleaguered Gallic Liberator (as if King Sarko would refuse any push to enlarge his grandeur).

No need to hold the Imperial Rome metaphors - from "victory lap" to "laurels" and the inevitable "to the victor the spoils" (of war), because that’s exactly what this was.

King Sarko and Little Dave may not look like the lovely lady from Angola who’s just been crowned Miss Universe - but they couldn’t be in fuller "feel free to bask in my glow" mode. A victory lap in the periphery of empire - even if you’re just a lowly proconsul - certainly beats being mercilessly crushed by Europe’s economic debacle.

To the sound of Apache helicopters patrolling the Mediterranean, and escorted by dozens of riot police, King Sarko felt the need to tell an unsuspecting world, "What we did was for humanitarian reasons. There was no hidden agenda."

But just in case - and with Tripoli’s top two hotels swarming with multilingual contractors/vultures - the chairman of the dodgy Transitional National Council (TNC), Mustafa Abdul Jalil, had to spell out the agenda: "allies and friends" would "have priority within a framework of transparency" in sharing the loot. So many juicy oil and gas (and water and uranium and reconstruction) contracts to bag, so little time.

Echoing King Sarko, Little Dave bombastically proclaimed, "the Arab spring could become an Arab summer". That’s code for NATO ready to bomb more dictators to oblivion - as long as there are any opportunist "rebels" willing to call the (European) cavalry by exhibiting "pro-democracy" credentials, fake or otherwise.

King Sarko even outlined the next chapter: the road to Damascus. Dear Bashar, time to start booking that one-way ticket.

The King Sarko/Little Dave lightning Tripoli tour was carefully timed to upstage the visit by Turkish Prime Minister Recep Tayyip Erdogan. Yet as far as the soul of the Arab Spring - Egypt - is concerned, Recep is the man, not the Anglo-French NATO bombers.

And to think that just yesterday British and French intelligence were so happy in bed with Gaddafi’s security apparatus. Such a pity that Little Dave did not enjoy some quality time with Tripoli military commander Abdelhakim Belhaj - former emir of the Libya Islamic Fighting Group (LIFG), former al-Qaeda asset, former CIA torturee but (good for him) eternal Gaddafi foe.

Read the rest of the article at: atimes.com