The Warrior Archetype and the Reemergence of the Goddess 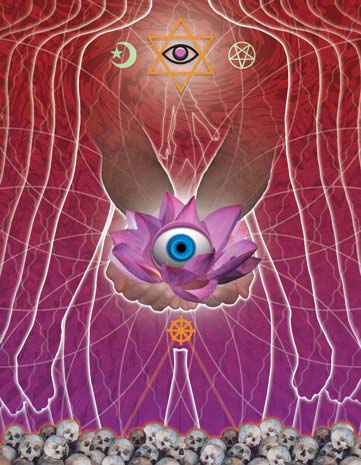 For the past few thousand years we have lived in a patriarchal paradigm where the masculine has been over emphasized at the expense of the feminine. This has produced not only the oppression of women, constant war and violence but also inner conflict for both men and women as each struggles to be whole human beings in a world where an imbalanced ideal is cherished. The result of the over emphasis on the masculine has resulted in it taking a negative form as the feminine is devalued and even systematically repressed.

This negative masculine form is cut off from its feminine side and so is out of balance and taken to an extreme in a futile attempt to compensate for the lack of grounding in the feminine. This is symbolized by two archetypal patterns in particular, that of the Negative Father and the Warrior.

The Negative Father is the authoritarian head of the household who rules the family and is often the source of abuse, sexual misconduct and control. This pattern is also seen in the authoritarian governments that have become the norm where the government represents the ultimate controlling punitive father figure for its citizens. This isn’t to say all fathers fall into this pattern but it is symbolic of a key aspect of patriarchal power.

As a counselor I see many clients who have a figure in their lives in the role of the Negative Father and much of their work in counseling involves working through trauma associated with that as well as reclaiming their power from that figure and this includes men and women.

Another key pattern in the patriarchal paradigm is the Warrior archetype. This pattern in its negative form represents the aggressive acting out of the masculine through war and domination.

The Warrior is not an inherently negative symbol but when it is not grounded in a healthy feminine center it becomes overly aggressive and indiscriminately violent. The Negative Warrior is an attempt at unity and wholeness but because it attempts this through external conquest it can never accomplish the desired wholeness and security.

What is missing internally is projected externally and then aggressively pursued so you get unending and escalating violence and war as the frustrated Warrior can never achieve peace and completeness.

The pattern of the Negative Warrior is especially important in the United States as it has become a sacred symbol in my opinion. The US has entered a phase where it is actively engaging in unending war and the attempt to dominate other parts of the world through its unique status as the primary superpower. In America today the symbol of the Warrior is held so sacred that one cannot criticize war or those engaged in it without being labeled unpatriotic or at worst a traitor. Respectful open debate, something that is essential in a democracy, is often not tolerated without it degenerating into attacks.

In my view this is due to an extremely insecure attachment to the Warrior ideal with an underlying denial of the disconnection from the Divine Feminine. America is certainly not the only country where this is playing out but it seems to be taking an especially polarized and intense form here. We can see this in our continued wars fighting an obscure and all encompassing enemy that is sometimes referred to as terror itself, the war on terror rather than terrorism. That would constitute a war on an emotional state. This is quite revealing in the sense that it is indeed terror that we project out externally and attempt to eradicate rather than facing it within where real healing is possible.

Terror could be said to be the result of human beings living an incomplete existence, disconnected from key parts of themselves and their world (the natural world) , the world becomes a terrifying place where what is unknown is feared and fought against rather than seen to be the mystery that it could be.

It is my view that today we find ourselves at the end of this dysfunctional worldview that is partially why we see it expressed in such extreme forms. The patriarchal systems are breaking down and as they do we see more desperate and intense reactions by forces trying to preserve them. This is inevitable as well as futile because the dissolution process is irreversible, as the very power of the system becomes the force of its destruction.

As difficult as this may be for many of us, it represents a very real potential for lasting change and evolution of consciousness. I see this most represented by a reemergence of the Divine Feminine and the Goddess archetype. Essentially the energies which have been most repressed are reasserting themselves as a natural process of balancing.

One of the most powerful manifestations of the Goddess is in the reaction of the Earth to the devastation that has been brought upon it by the patriarchal societies that relate to Mother Earth as a commodity to be possessed and used. Mother Earth is now responding with ever more forceful feedback in the forms of climate change, storms, earthquakes and other natural phenomena.

At the same time, we are seeing the Goddess reassert herself in other more benign forms such as women stepping into more roles of leadership and authority as well as the powerful and increasing influence of Goddess based and nature based spirituality. The increasing popularity of Neo-pagan spiritual paths is an example. Many of these groups involve women in positions of religious power and authority as well as an emphasis on the Divine Feminine and Mother Nature.

However this most often is not done at the expense of the masculine. For example, in Wicca the Goddess and the God are honored together as two poles of the divine (in most Wiccan traditions) . The rapidly growing interest in Shamanism is another example of this as people begin to reconnect with native cultures and more tribal alternative lifestyles. We also see a growing interest in plant medicine and more of a mainstreaming of alternative healing methods.

On an internal level, I’m seeing more and more men waking up to their deeper emotions and realizing that it is okay and even healthy to express emotions other than anger. I’m speaking here of men specifically. Being a man myself, I have experienced this.

In embracing the Divine Feminine within, and beginning to see it as a powerful source of inspiration, healing and wholeness men can transform their expression of the masculine into its positive form that is assertive rather than aggressive and in service of the whole rather than destructive. The reintegration of the feminine side means that men can become whole human beings and also transform their relationship with women… no longer projecting their feminine side onto women and then trying to possess and control them to reclaim it.

Men can see women as their divine partners and as manifestations of the Goddess, which brings great respect and a love that is unconditional. We have a powerful opportunity to come back into balance as a planet, to reintegrate the cut off parts of ourselves and to heal ourselves as we step into a new dimension of consciousness. Resisting this time of change is what will bring us suffering and destruction but we each have a choice as to how we proceed into the new paradigm.

Hopefully we will see this choice and choose well.


Lenon Honor - The Borg Agenda & The Sexualization of Technology

Neil Kramer - The End of the Fourth Age

Michael Tsarion - Marketing Industry, Teenagers & Subversive Use of Sacred Symbolism in the Media