The World Won't End The Way You've Been Told 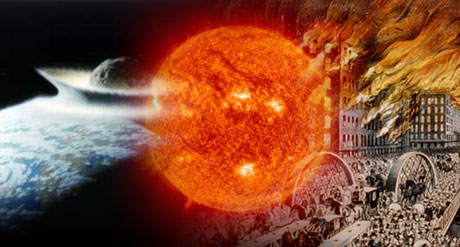 "Confronted on many occasions in the past by the prospect of world-end, national elites have often found themselves having to suppress public panic -- only to discover, too late, that usual means of control commonly fail. Thus an institutionalized science is expected to withhold knowledge of the threat; a self-regulated press is expected to make light of any disaster; while an institutionalized religion is expected to oppose predestination and to secure such general belief in a fundamentally benevolent deity as can be mustered."

The above comments are found in a letter (dated June 4, 1996) from the office of Dr. P. A. Charles, then Head of Astrophysics of the University of Oxford, to Ms. Victoria Cox, then Chief, Physics and BMD Coordinator of the European Office of Aerospace Research and Development. The letter (written by S V M Clube) summarizes the findings of USAF funded research resulting in the report, The Hazard to Civilization From Fireballs and Comets. The full letter may be read
here:
http://stinet.dtic.mil/cgi-bin/GetTRDoc?AD
=A359871&Location=U2&doc=GetTRDoc.pdf

Although the report does not represent the electrical perspective on comets and/or meteoroids, it raises many issues of enormous import to the Electric Universe. As correctly pointed out by Clube, scientific, governmental, and religious officialdom seem to live in either deliberate or unconscious denial of the real global threats posed to Earth -- including evidence of global catastrophes in the recent past.
In 1950, Immanuel Velikovsky proposed in his book Worlds in Collision that in a once-violent and chaotic solar system, the earth experienced global disturbances, including electric arcs passing between the earth and cosmic intruders. Subsequently, academia applied such pressure to the book's publisher that it was dropped while it was the NY Times'
number one bestseller. This pathology of denial and suppression continues today, as mainstream cosmology remains willfully ignorant of the Electric Universe -- a model that rewrites much of human history into a story that is far more dramatic and frightening than we've been led to believe.

Paradoxically, officialdom's lobbyists continually promote fear of the End of the World in the hope of securing endless billions in funds for more research and "action." The "doomsday" asteroid threat and the global warming madhouse are the favored causes of the moment. From the Electric Universe perspective, officialdom has misled the public on both issues, and required is immediate and fundamental correction.

When it comes to "killer asteroids," according to EU proponents, our planet may not be nearly so vulnerably as the mainstream insists. From the EU perspective, as explained by Wallace Thornhill, Earth, asteroids, and comets are charged bodies moving in the electric field of the Sun. Thornhill believes that the charge difference between the earth and these bodies from the depths of the solar system provides the earth with a natural defense against asteroids and comets, particularly very large ones. When an asteroid or comet enters the electric field of the Earth, which is contained within its "magnetosophere," or more accurately, plasma sheath, there will be a powerful discharge between the two bodies. (See previous TPODs, Tunguska -- The Fire in the Sky, and The Comet and the Chicago Fire).

The internal electrical stress caused by the discharge of the interloping asteroid or comet will generally cause it to detonate like an exploding capacitor -- just as comets have frequently exploded "inexplicably" as they moved toward the Sun on their elongated orbits.
(See The Explosive Demise of Comet Linear, and When Comets Break Apart. Also Schwassmann-Wachmann 3 Disintegrates)

This electrical effect is also witnessed in bolides that flicker, flare up and explode as they streak toward the Earth. It is why meteors become visible to the eye when they are about 60 miles in altitude, and a few appear at up to twice that height. And it is why meteors are sometimes accompanied by electrophonic sound that is simultaneous with their flaring up. (See The Peekskill Meteor).

This is not to say that the Electric theorists believe comets and asteroids pose no threat to human beings. But the havoc these bodies might wreak would likely be limited to localized disasters -- perhaps a series of Tunguska-like events producing regional devastation with falls of sand and dust, perhaps electrical craters, fires and earthquakes, but no single impact crater at all. (For a review of the recent candidate for a Tunguska "impact" site, see New Tunguska Crater Found?).

The devastation of a global extinction requires an encounter with something much larger than a puny comet or asteroid. In all likelihood, it requires electrical exchanges with a body the size of a planet or moon.

On the question of global warming, EU proponents insist that the issue has never been properly considered. Any attempt to understand atmospheric and meteorologic phenomena on Earth or any planet is futile if one remains ignorant of the Electric Sun model. Thornhill writes in his essay "Global Warming in a Climate of Ignorance":

"But there is a way to understand the Sun, if only we can step outside the traditional astrophysical assumption that gravity alone operates in space. The generation and transmission of power for electric lights involves magnetism. And unlike any campfire, the Sun manifests an abundance of magnetic phenomena. Those phenomena suggest that the Sun is an electrical body. The magnetic field of the solar wind shows that electric currents flow within the solar system. The million-degree temperature of the solar corona points to an external power source for the Sun. The polar plume and equatorial plasma torus show that the Sun, like all stars, is the focus of galactic currents 'pinching' naturally into an hourglass form with an equatorial current sheet." (See full article here: Global Warming in a Climate of Ignorance)

According to Thornhill, Earth and all the planets are in a continuous electric relationship with the Sun. This is why the temperatures of the upper atmospheres of planetary “gas giants” have long presented a conundrum to astronomers. They are hotter than can be explained by absorbed sunlight, and other attempts to explain the temperature anomalies in mechanical terms have met with failure.

In a recent report in the journal Nature, scientists commented on the perplexing (to them) heating of Saturn's upper atmosphere: "This unexplained 'energy crisis' represents a major gap in our understanding of these planet's atmospheres." Another scientist commented, "We need to re-examine our basic assumptions about planetary atmospheres and what causes the observed heating."

Unfortunately, the "basic assumption" that has directed the space sciences for nearly a century is the belief that space is electrically inert. Most astronomers and meteorologists still do not realize what has already been demonstrated by recent discoveries of the Earth-Sun
connection: charge exchange is continuous, and the auroras are just one effect of the ongoing electrical transactions. The planetary theater is, in fact, filled with electrical circuits across the conducting plasma medium.

It is the electric model of the Sun that will enable us to understand the highly energetic meteorological phenomena we see on many planets in our solar system, including the extraordinary global dust storms witnessed on Mars. (See When Dust Storms Engulf Mars.

In fact, in the famous planet-enshrouding Martian dust storm of 2001, temperatures rose a stunning 40 degrees C -- what investigators called a case of "instantaneous global warming." But to this day, NASA scientists still give no attention to the relationship of that event to the planet’s eccentric orbit, or the fact that Mars was nearing perihelion and was the closest it had been to Earth in about 12 years.
At that time it was also being "tickled" by the Earth's plasma sheath, or magnetosphere, establishing a temporary electrical connection between Earth and Mars for the transfer of charge. It seems that Mars responded with an outburst of atmospheric discharges, these taking the form of monstrous dust devils -- or more accurately, electrical tornadoes. (See Picture of the Day for March 22, 2005, Dust Devils -- or Tornadoes).

From the EU perspective, interplanetary currents focused largely on the sun feed electrical storms on planets, including Earth. The increases in solar output, together with the incoming currents directly intercepted by planets, can charge up the planetary ionospheres -- the outcome being "anomalous" heating of the upper atmospheres.

Since "global warming" is being witnessed on other planets, including Mars (according to NASA, the planet has been steadily warming for at least the past several decades), mainstream scientists have greater cause than ever to "re-examine (their) basic assumptions about planetary atmospheres and what causes the observed heating."

But ironically, from the Electric Universe perspective, the potential for global catastrophe on Earth, including rapid climate change, may be far GREATER than most scientists believe. Our relationship with the Electric Sun is far from purely benevolent. Within the last two centuries, we have been hit (or nearly hit) with solar flares that may have had the potential to eradicate civilization. In September of 1859, we were wracked by a flare so powerful that telegraphic service went down, equipment caught fire, and some people were even shocked into unconsciousness. A new book "The Sun Kings: The Unexpected Tragedy of Richard Carrington and the Tale of How Modern Astronomy Began,"
outlines the terrifying danger posed by CME storms, including a series of powerful solar flares that hit Earth during October 2003. This vision of a possible future stands in radical contrast to the nuclear fusion model, which would have us believe that the earth will exist rather peacefully in the Sun’s domain for several billion years, until its hypothetical cataclysmic death throes.

Albert Einstein once asked, "Is the Universe friendly?" Ultimately, the answer is probably a resounding "No!" although not for the reasons we've always been told.

For a video introduction to the Electric Universe, you may view the documentary Thunderbolts of the Gods, available on Google video.