They Stripped Marriage Of Its Sacredness To Sell Gay Marriage 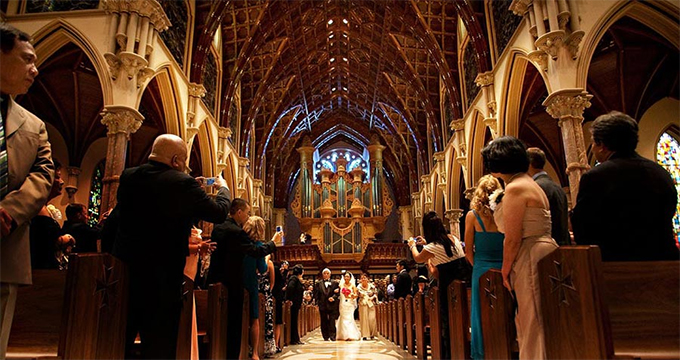 The top-down imposition of gay marriage is now in the rearview mirror for America’s leftward drift. Will it grant legitimacy to such unions?

No. Legitimacy comes from widespread acceptance, not from imposition. Negative referendums, brow-beating by the media and volunteer thought police and five Supreme Court justices are not the sign of widespread acceptance. William Safire was right over a decade ago when he wrote that this gay marriage push was all over one word “marriage” and the legitimacy and approval that it granted. Those shocked at how fast this all happened may point to gay propaganda, but it is not just that. The media and academia smeared marriage long enough to remove the sacredness of the institution.

Many point to the skyrocketing support for gay marriage that has occurred in recent years. There are large, well-respected polls going back to the mid ’90s that show support around 25% and even in the mid ’00s support around 35%. It was a minority opinion to support gay marriage, but the conceptual granting of some recognition was not a minority. Tracking right along those same polls that showed a majority against gay marriage, were polls that showed a near majority or clear majority supported recognition of civil unions for homosexuals. A couple of decades of ‘gay is okay’ and ‘just like us’ propaganda did help put gay marriage over the top, as did five Supreme Court justices and every major corporation not named Chik-Fil-A.

Eventually enough Americans who already felt okay with gays being granted civil unions gave in on the word marriage. The religious did not do so, and that is because they could foresee the eventual fight over religion in general. The irreligious middle did. The somewhat religious caved. The type of people who say, “Half of all marriages end in divorce anyway so why not?” pushed it along. Half is a lie, but a lie the media loves to push. The divorce rate for first time marriages is under 40% now, and depends on the socioeconomic and educational status of the bride. Marriage is not a 50-50 chance as much as a 70% chance of succeeding. A bride over 25 with a college degree has a divorce rate half of the average.

Divorce has become an underclass plague with heavy correlation to minority brides, but no one wants to discuss that because we cannot criticize our duskier underclass for dysfunctional behavior. It is another method of using poor decisions and life outcomes of the underclass to manipulate core, middle class Americans into accepting, condoning, and emulating bad behavior.

Hollywood, the greatest propaganda machine ever created, consistently pumps out a message that marriage is no longer sacred in our culture. Television shows featured divorced leads, unhappily married women, unhappily married men, and few stable, loving marriages to serve as anchors for their familial networks. The act of getting married turned became the focus, rather than spiritual bonding, with the wedding day turning into a wedding pageant. The average wedding costs over $25,000, but in reality, many couples spend less than $10,000. Still, the status race for bigger and better weddings has grown. Psychotic behavior by brides has become a joke to the point where reality television has wedding shows named Bridezilla or micromanaged wedding pageant contests like Four Weddings.

Lost in that is that the wedding signifies the public declaration and recognition of a sacred union between man and woman. This is lost in topping prior weddings for food, covered chairs, decorations, music and party favors. It is a show where the woman is the star and the man just has to show up.

The activists sold you on marriage just being a list of benefits married people enjoyed, so gays needed that equal treatment, too. There are all of these benefits, and our egalitarian society can never deny someone government gimmedats. No one would pause for a moment and note the concrete financial benefits that the federal and state governments provide to unmarried mothers versus married mothers, but gosh darn it, one time in some mythical hospital a gay guy could not visit his lover dying of AIDS. Civil unions could grant all of the same benefits, but that was not enough. The gays wanted the word marriage. They wanted to be able to say to mom and dad, “See my relationship is real, buy me an anniversary card!” The homosexuals needed to receive auspices for their unions, and if the churches were still going to frown upon them, then the government could grant them that legitimacy. They failed to see that all they earned was the right for the government to administer their break ups.

The media created a false debate “marriage or no” to paint a battle between the evil bigots and righteous crusaders. No one mentioned the civil union approach. That solution was junked quickly, tipping the real target for using gays: religion. The Supreme Court even mentioned granting dignity in the ruling, which is comical considered how smeared marriage has become. If marriage is an oppressive institution for women, why push gays into it? If it is old and archaic, why do gays want it? Humpty Dumpty leftism strikes again! Marriage is awesome right now for this tiny group!

They want it because despite the smearing, we know the value of it. The emotional connection between couples. A newer wedding reception tradition is the anniversary dance. All married couples get on the dance floor to dance to one song. Every ten seconds the host asks couples married under X years to leave the floor. Those younger couples create a circle around those left dancing, and the couples are whittled down until it is the married couple with the longest tenure left. The crowd claps for the 50, 60 or 65 years the couple has been together. Some people will get teary-eyed because they recognize what those years mean. Usually, that couple shuffling on the dance floor is the elder statesmen duo of the family, and this wedding and the crowd is the extended product of their union. Song ends, the old man kisses his bride, and the new bride and groom hug the old couple. That long lived couple is the hoped for future for the new couple.

Everyone present understands that communal moment. Those dances make for great Kodak moments, but you would never see Hollywood push that. The media will push as much programming as possible to get you to forget the spiritual element to marriage. The weak-willed, who will forget they cried as they saw their grandparents dancing at a wedding, made the jump from civil unions for gays to marriage for gays because “Who cares? Marriage doesn’t matter anymore.” That moment of past and future and the implications of children for a new generation to repeat the cycle is part of the sacred moment and public recognition of marriage.

That spirit and legitimacy could never be granted by a government in a contentious manner to homosexuals who cannot reproduce. This is lost on the egalitarian pushers, it is lost on the herd creatures who forget, but it is not lost on us.