Thor and his followers come to the Northern California hills 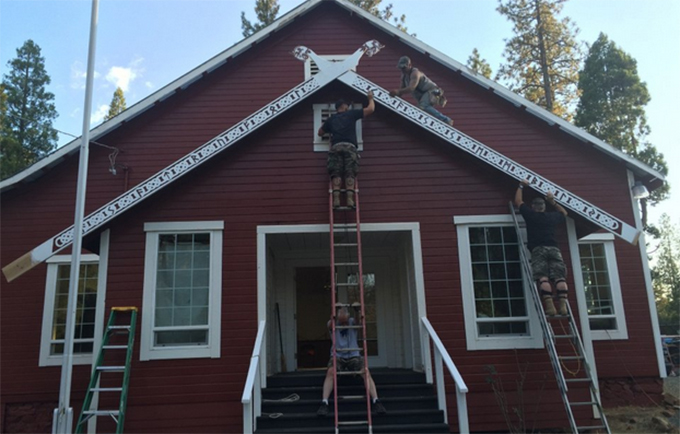 Nothing about the setting of pines, redwoods and undulating foothills of the Sierra Mountains is reminiscent of Scandinavia, Vikings or Thor.

But around one corner of a snaking two-lane road sits an old barnlike building newly decorated to invoke a Viking longhouse, with dragon-headed door hinges and a carved red “mjolnir” — the hammer of Thor — above its front doors.

Welcome to what is being called the first free-standing, public Asatru “hof” in the United States — a worship hall and meeting place for members of the Asatru Folk Assembly, a 700-strong organization of people who revive the ancient religion of the Norse gods.

“We knew this was where we were supposed to be,” said Stephen McNallen, AFA’s 66-year-old founder, as he led a tour through the hof and its “ve,” an outdoor circle of trees and stones where rituals will be held. “We made an offering to the gods and let it be known that we wanted to be here. And 90 days later it was ours.”

The hof — a Norse word for “hall” — was inaugurated in early October with a “blot,” or ritual, that included candles and prayers, fires and blessings, banners and sacred mead. About 80 people attended, some from as far away as Florida, where there is a concentration of AFA members. There is another sizable group in Pennsylvania, with smaller groups in several other states.

No one knows exactly how many Asatruar — followers of Asatru — there are in the U.S., but a “heathen census” conducted in 2013 by Karl E.H. Seigfried of The Norse Mythology Blog put the number at a little under 8,000.

Asatruar worship the Norse gods Thor, Odin, Freyr and Frigg, among others. Ancestor worship is also a large part of the faith, which is considered a folk religion. Asatru was revived from pre-Christian times in the 1970s in Scandinavia and spread. In February, an Asatru group in Iceland announced it had broken ground on a new, circular hof, but it is not yet complete.

And while there have been other hofs here — rooms in houses, backyard sheds, temporary structures or rented sites — the hof in this rural setting about 75 miles north of Sacramento is the largest in North America, according to AFA (a Maryland Asatru “kindred” owns a small house that serves as a hof, as well). The 4,100-square-foot building was built in 1938 and has done duty as a school, an agricultural hall and a church. AFA raised more than $54,000 on Indiegogo to purchase it.

Its opening is a sign of maturity not only for AFA, a group with roots that date to the 1970s, but also for what members and scholars refer to as “American Heathenry” — ancient, polytheistic religions experiencing contemporary revivals.

“This is a validation of 45 years of work,” said McNallen, taking a seat beneath some cedar trees shaded by a large boulder that will serve as an outdoor altar. “I feel I am entering a new phase in my relationship with the holy powers as a result of this hof.”

Bradley Taylor-Hicks, AFA’s chief of staff and a member of its clergy, put it like this: “In America, we (followers of Norse religions) don’t have sacred spaces. And we had to establish a practice. This is a place where we can help people do that.”

But the road to the Brownsville hof hasn’t been without bumps. McNallen has sometimes been a divisive figure in the broader Asatru community, which includes several other overseas and American-based groups. His break with a different Asatru group was acrimonious, and an essay he wrote on “metagenetics” — an idea that religion is carried in the genes — brought charges of racism.

“McNallen’s point-of-view, which mirrors that of Odinist (Norse religion) organizations both in America and Europe, is that everyone has their own culture, and we should stick to it,” Rick Paulas wrote in an article on Asatru for Vice Media.

But Jeffrey Kaplan, an associate professor of religion at the University of Wisconsin-Oshkosh who has studied several Asatru groups including AFA, said that while most Asatruar are white, the group’s beliefs are based not on racism but on ancestry — the idea that the religion of one’s forebears can exert a strong pull — and that metagenetics is largely forgotten or ignored by young Asatru adherents.

McNallen and other AFA leaders may have once had some contact with racist subcultures, but “really tried to redirect their anger to more positive directions — ritual and culture over hate — and did as far as I could see a pretty good job of it,” Kaplan said in an email interview. “They are really NOT a hate group, but they have no direct authority or control over anyone. I honestly don’t think they are a threat to anyone, and not at all haters or dumb racists.”

When asked about the relationship between Asatru and racism, McNallen said: “We view Asatru as a native religion with a special appeal to native Europeans. But just because you love your own family you don’t also hate the family next door.”

The week before the opening ritual, an honoring of female ancestors, the hof was busy with volunteers working on carvings, cleaning, painting and decorating. Jessica Roesner, a welder, was putting a blowtorch to some Viking-inspired metalwork. Brought up a Christian, she discovered Asatru and AFA two years ago.

“I felt a call,” she said during a momentary break, her protective visor raised. “The stories about the gods made sense.”

Nearby, Thorgrun Thompson-Odden worked on constructing the new front doors. He and his wife, Katie Thompson, became Asatruar in 1992.

“This is a centering for us,” he said, his hands on the thick wooden planks that would become the hof’s massive front doors before the ceremony. “It is like a home. There is a power here in the forest. You can feel it. This is ours. We don’t have to leave it. We can build on it.”