Tomb of the Tattooed Sorceress Queen, The Lady of Cao

Jan 7, 2014 Source: ancient-origins.net
The day had been spent in ritual battles, and a group of individuals who were vanquished, naked, and tied-together were marched up the long stairs to the top platform of the great pyramid where there they were killed, throats cut, sacrificed to their supreme deity. A great silver goblet, the mark of a ruler in Moche society, was used to collect the blood and then the blood was consumed by the priestess-queen and the circle was completed, for life feeds on life, and this seems to have been a fundamental cultural concept for the violent, passionate Moche society.

This ritual is depicted on the walls of the Moche temples and while not a great deal is known about this enigmatic pre-Incan culture, what we do know from their wall paintings and reliefs as well as their exquisitely executed pottery is that these people lived life as voraciously as they embraced death. They celebrated nature, engaged in sexual acts, violence, birth, and death with great aplomb, accepting and celebrating the balance and duality of the world. 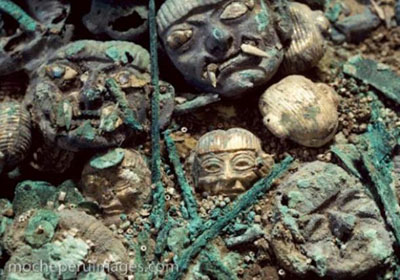 When archaeologists first began to discover these images of Moche life painted on their tomb walls and moulded in their pottery, they thought that the depictions were so horrific surely they could not be real – the pictures must be some sort of metaphorical representation of cosmic events, and certainly no culture could really have powerful blood-drinking priestess mystics who ruled such a society. Surely, people so violent and literally blood-thirsty must be ruled by men?

Rich tombs had been excavated from the Moche culture but one of the most famous was the tomb of the Lord of Sipan, discovered in 1987. Based on the findings in his tomb it was of course assumed that this was a male controlled society, but the tombs of the Moche had many surprises yet to come and the first was the tattooed mummy of El Brujo in 2006.