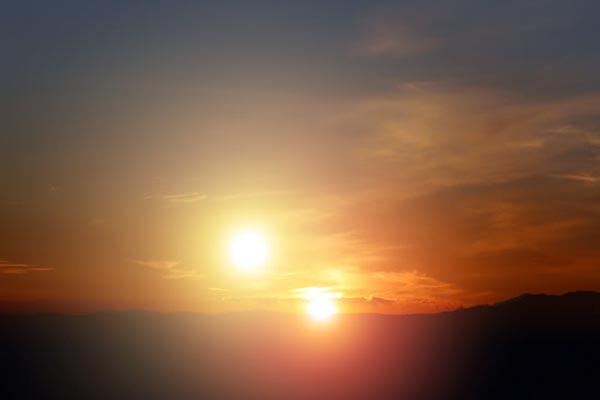 Earth could be getting a second sun, at least temporarily.

Dr. Brad Carter, Senior Lecturer of Physics at the University of Southern Queensland, outlined the scenario to news.com.au. Betelgeuse, one of the night sky’s brightest stars, is losing mass, indicating it is collapsing. It could run out of fuel and go super-nova at any time.

When that happens, for at least a few weeks, we’d see a second sun, Carter says. There may also be no night during that timeframe.

The Star Wars-esque scenario could happen by 2012, Carter says... or it could take longer. The explosion could also cause a neutron star or result in the formation of a black hole 1300 light years from Earth, reports news.com.au.

But doomsday sayers should be careful about speculation on this one. If the star does go super-nova, Earth will be showered with harmless particles, according to Carter. "They will flood through the Earth and bizarrely enough, even though the supernova we see visually will light up the night sky, 99 per cent of the energy in the supernova is released in these particles that will come through our bodies and through the Earth with absolutely no harm whatsoever," he told news.com.au.

In fact, a neutrino shower could be beneficial to Earth. According to Carter this "star stuff" makes up the universe. "It literally makes things like gold, silver - all the heavy elements - even things like uranium....a star like Betelgeuse is instantly forming for us all sorts of heavy elements and atoms that our own Earth and our own bodies have from long past supernovi," said Carter.

UPDATE: To clarify, the news.com.au article does not say a neutrino shower could be beneficial to Earth, but implies a supernova could be beneficial, stating, "Far from being a sign of the apocalypse, according to Dr Carter the supernova will provide Earth with elements necessary for survival and continuity."

UPDATE II: In a follow-up piece on news.com.au, Dr. Carter stressed that there is no way of knowing when the star may go supernova. U.S. astronomer Phil Plait added, "Betelgeuse might go up tonight, or it might not be for 100,000 years. We’re just not sure."

Marshall Masters - The Kolbrin and Ancient Records of Planet X