“You must never [again] refer to Asian men,” and your “awareness of ethnic issues” needs to be raised. This chastisement was given to a UK Home Office researcher who, apparently, was thought guilty of “racism.” Her offense?

She blew the whistle on a pedophilia ring in the English town of Rotherham.

One in which the girl victims were white — and the abusers Muslim Pakistanis.

The New American, in its initial coverage of this story last Friday, quoted an Associated Press description of the abuse:

About 1,400 children were sexually exploited in a northern England town, a report concluded Tuesday....

... The report described rapes by multiple perpetrators, mainly from Britain’s Pakistani community, and how children were trafficked to other towns and cities in the north of England, abducted, beaten, and intimidated.

"There were examples of children who had been doused in petrol and threatened with being set alight, threatened with guns, made to witness brutally violent rapes and threatened they would be next if they told anyone," Jay said. "Girls as young as 11 were raped by large numbers of male perpetrators."

Yet, as we noted in last Friday’s article, “These crimes continued for 16 years not because authorities were unaware of them, but, rather, because of an apparent ‘hear no evil, see no evil, speak no evil’ attitude in government.” We then quoted OneNewsNow.com’s Charlie Butts who wrote:

Colin Hart, director of The Christian Institute in New Castle, says social workers warned authorities that something was wrong.

"But they continually ignored the concerns that were raised," says Hart, "and in one case a social worker was disciplined for raising concerns."

The Associated Press and BBC have reported the perpetrators were Pakistani, and political correctness trumped law enforcement action.

And now more details have emerged about the kind of discipline meted out, and they illustrate well why police and other officials were intimidated into silence. Just consider the document below (courtesy of Twitchy.com), which outlines what befell the unnamed Home Office researcher after she reported the child sexual abuse: 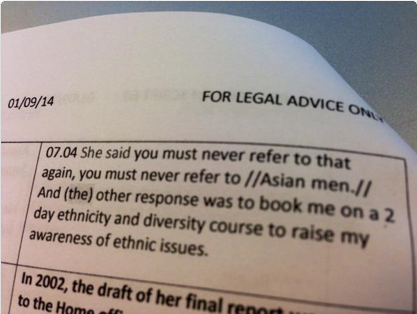 This doesn’t mean that no Britons are speaking up. As also reported by Twitchy, eloquent UK politician and Member of the European Parliament Daniel Hannan weighed in on Twitter, writing,

Yet Hannan is in the minority — and not just among high-profile figures. While a recent BBC poll showed that 95 percent of Britons believe multiculturalism is a failure, few will speak up without anonymity’s protection. Under UK “hate speech” laws, citizens can be charged with a “racial offense” for criticizing Islam and may suffer punishment. As a result, reports Roger Scruton at Forbes, it doesn’t matter that white girls were specifically targeted by Muslim perpetrators in Rotherham who do not treat them "with the respect that they treat girls from their own community" and who see "English society not as the community to which they belong, but as a sexual hunting ground."

“Let slip the mere hint that Pakistani Muslims are more likely than indigenous Englishmen to commit sexual crimes and you will be branded as a racist and an Islamophobe, to be ostracised in the workplace and put henceforth under observation,” writes Scruton. In fact, when one father went to the police demanding justice for his abused daughter, the writer tells us, he was “arrested for obstruction and charged with wasting police time.”

Read the full article at: thenewamerican.com
Stop creating a climate of fear!