U.S. Sheriffs fed up as 25 Americans are killed each day by illegal immigrants 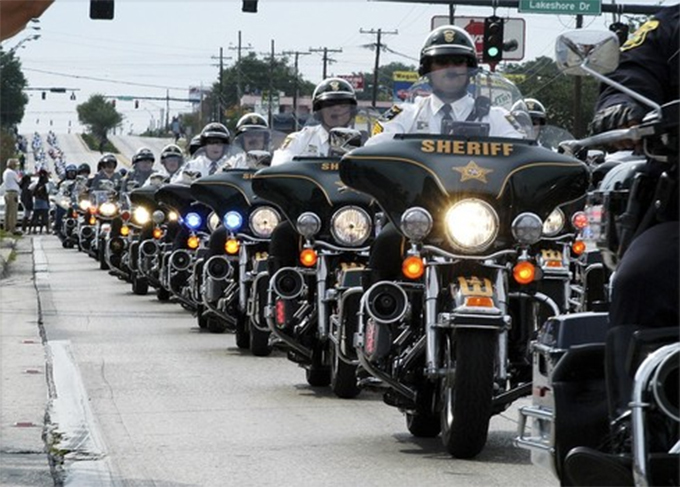 Data from U.S. Sheriff’s offices revealing the startling fact that about 25 Americans are killed each day by illegal immigrants, has forced the concern that President Barack Obama’s biggest political enemy many not be the upcoming Republican Senate and House after all.

Millions of U.S. citizens, disenchanted with federal government’s broken promises and lack of will to defend the Constitution, are focusing confidence toward what some say could be the White House’s biggest secret fear: the local American Sheriff.

Sheriffs across the country are fed up. “With little to no information, financial assistance, or physical support from the federal government, sheriffs are struggling to understand the threats and risks to their counties,” wrote a coalition of Sheriff Associations.

As recently as last week a group of Sheriffs marched on Washington D.C. to protest the Obama immigration agenda. To make matters worse for the Executive and Congressional branches of government, a coalition of Sheriff’s associations across the country have taken a strong stance against the Obama Administration.

The Western States Sheriff Association (WSSA) released a position statement defending border law enforcement agencies including the U.S. Customs and Border Protection (CBP) and Border Sheriffs. While supporting humanitarian efforts, the “sheriffs are concerned that the crisis is creating vulnerabilities that are being exploited by real and ever-increasing threats to our national security.”

“We, a Coalition of Sheriffs’ Organizations, understand the importance of partnerships with the federal government and stand together to ensure that public safety and homeland security are appropriately promoted, protected, and preserved.”

However, their position states that “sheriffs strongly oppose outright amnesty for those who are in the United States illegally because it is not a practical solution to illegal immigration issues.”

The WSSA and Sheriff Coalition claim that last summer’s flood of immigrants were “perpetrated through an organized effort aided by groups of transnational criminals who profit from these activities and exploit those being trafficked.”

The mainstream media and White House focus on the “humanitarian effort for those that have entered our country illegally is a distraction engineered to further the goals of the criminal enterprises,” the Sheriffs confirmed. “Current border security measures have little effect on the smuggling and trafficking of humans, contraband, and illegal drugs moving across our borders, forcing local law enforcement to prepare for and respond to the continuing threats of violence, drug smuggling, and exploitation.”

The breaking point for many law enforcement officers was recent killing of Sacramento County Sheriff’s Deputies Daniel Oliver and Michael David Davis, Jr. by an illegal criminal immigrant that had been deported at least two times prior to the murders.

Pinal County, Arizona Sheriff Paul Babeu told reporters in Washington on Dec. 10th that the “president must be stopped in this mass executive wave of law, which he doesn't have authority for."

"The border remains unsecured. And what we, the elected sheriffs of America, are demanding is that for once, put America and our citizens and our safety and our security first," Babeu stated to Newsmax. "Do not put illegal immigrants before American citizens. And that's what has happened."

“The policies of recent years that encourage immigrants to illegally enter our country have created serious threats to our domestic and national security,” Sheriff Thomas M. Hodgson of Bristol County, Mass, who organized the Washington D.C. march.

While mainstream media and political party spin focuses on the Senate wins by Republicans after the 2014 mid-term elections in November, the fact remains that Americans cemented thousands of conservative and anti-liberal positions, not only in statewide elections, but especially in local races.

“The citizens of our nation are counting on the American Sheriffs to fulfill our oath to preserve law and order and live up to our responsibilities as guardians of the United States Constitution,” Sheriff Hodgson said.

Richard Mack, former sheriff of Graham County, Arizona and a founder of Constitutional Sheriffs and Peace Officers Association (CSPOA), warns any politician who goes against the constitution that “we will take America back, Sheriff by Sheriff, County by County, State by State.”

“Sheriffs across this country are tired of being marginalized,” Sheriff Hodgson stated. “We need to make it clear that we’re the ones with the boots on the ground at the border and we are saying loud and clear that the situation there is getting worse and worse.”

The WSSA position statement stated that when illegal aliens were granted amnesty in 1986, “it did little to stop the flow of illegal immigrants from coming across the borders and, in fact, contributed to thousands of fraudulent applications for amnesty.”

"I have a message today to every leader in Congress, to every official in the White House, and to President Obama: We are going to fight this illegal amnesty and we are not going to stop," Alabama Sen. Jeff Sessions, who spoke at the Washington event stated. "We are going to carry out the mission the voters sent us here to do.

Other notable Republican wins across the nation for Sheriff were:

Many law enforcement organizations are uniting in their strategies against what many consider to be a federal government out of control. Initially, CSPOA trained 300 Sheriffs on their oath of office and the Constitution to ensure they understand their rights in protecting American citizens. The effort has recently grown to over 500 Sheriffs who have publically acknowledged they defend the Constitution.

The recent growth and interest in Sheriffs by citizens is primarily driven by the Obama Nov. 30, 2014 announcement of his immigration and amnesty executive order. Sheriff Eddie Guerra, of Hidalgo County, Texas sees the exploding dangers daily along the southern U.S. border.

Sheriff Guerra says American counties across the nation “are going to see what I’m seeing here on the border in large numbers.”

Obama’s amnesty order is creating incentive for more illegal aliens to try to “come into the US,” Sheriff Guerra stated. “The drug cartel will exploit any opportunity to come into the United States, and this will create the cover for them to continue exploiting our porous border.”

“This will create the opportunity for kidnapping, trafficking, sexual abuse, prostitution, and smuggling,” Guerra acknowledged. “These smugglers have no regard for human life. They destroy private property. They have no respect for law enforcement. They circumvent U.S. checkpoints. It’s a terrible situation.”

Even New York Mayor Bill de Blasio has been blasted by the Patrolmen’s Benevolent Association. Last week the group began gathering and publishing waivers signed by local police officers requesting that the liberal mayor and Council Speaker Melissa Mark-Viverito be banned from their funerals in the event of their death in the line of duty.

“Don’t Insult My Sacrifice” waivers say that the specified city leader’s “consistent refusal to show police officers the support and respect they deserve, I believe that their attendance at the funeral of a fallen New York City police officer is an insult to that officer’s memory and sacrifice.”

Before Obama’s executive order announced Rockingham County, North Carolina Sheriff Sam Page was quoted by numerous reporting agencies that “human trafficking, drug trafficking and criminal activity are coming through our borders, but not staying near our borders – it’s getting into every part of the United States.”

“We’re not catching but a small percentage of those coming across,” Sheriff Page explained. The Obama executive order “will place public safety in our communities in danger, and taxpaying citizens will be left picking up the tab.”

The CSPOA’s list of state associations endorsing their efforts is growing. While CSPOA is careful to note that “a statement from a state association does not necessarily mean that every sheriff in the state supports it,” the group has selected to list the associations separately from individual sheriff’s support.