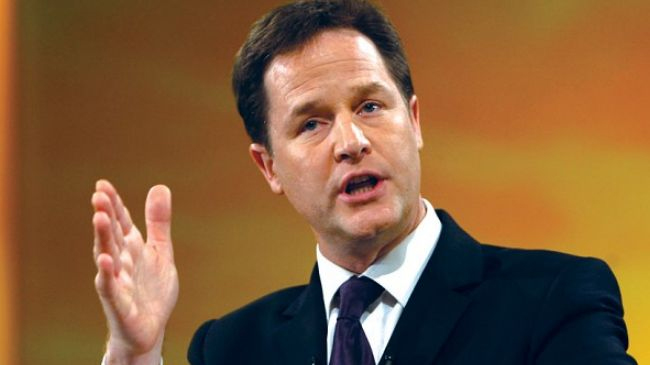 Britain’s Deputy Prime Minister Nick Clegg has pledged to block attempts by the coalition government to impose a cap on the number of European Union (EU) migrants.

Writing in the Sunday Times, Clegg described as "pointless" and "distracting" the UK’s Home Office plans for a cap on migration from the EU, possibly at 75,000 a year.

The Liberal Democrat leader also said that he backs ’sensible and reasonable reforms" to migrants’ benefit rights, but that he "draws the line" against the idea of limiting freedom of movement in the 28-member bloc.

“Sticking a big no-entry sign on the cliffs of Dover may be politically popular, but at a huge economic cost. What would happen if tonight every European living in the UK boarded a ship or plane and went home?” Clegg said.

Meanwhile, British Business Secretary Vince Cable said the Conservative party is in "a panic" over immigration because of the rise of the UK Independence Party (UKIP).

Speaking on the state-run BBC’s Andrew Marr on Sunday, Cable also accused the Tories of resorting to "populist measures that do harm".

The remarks come amid a growing row over the Conservatives’ proposals to tighten up welfare rules for EU migrants and escalating concerns over an influx of Romanians and Bulgarians to Britain in the near future.

British Prime Minister David Cameron confirmed on Wednesday that the new rules on migrants were being laid before the UK Parliament to bring them in by January 2014, when EU working restrictions are lifted.

Under the new measures, migrants from the 28-member bloc will be barred from claiming out-of-work benefits for their first three months in the UK.

EU nationals will also have their payments stopped after six months unless they can prove they have a “genuine” prospect of employment.

Moreover, those migrants found begging or sleeping rough could be deported and banned from re-entry to Britain for 12 months.