Under the Red Sky

Let the bird sing, let the bird fly.
One day the man in the moon went home
and the river went dry. - Bob Dylan 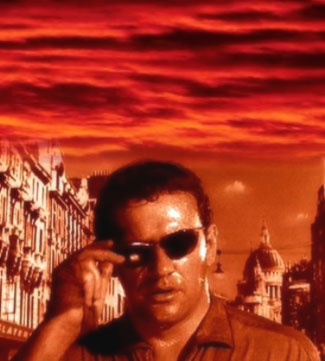 Sometimes, like these times, the world appears strange even in newspapers.

Thousands of birds fall dead from the sky in Australia and dozens litter the streets of Austin Texas; New York City is bathed again in a mysterious stench, and again authorities assure residents it's harmless, though they don't know what it is and are no longer even trying to find out; multiple reports of fireballs, rock falls, strange lights and UFOs (one in Iran today, and a dramatic flap two years ago, a report of which the BBC illustrates with a photograph of Venus) compound the sense that's no longer nonsense: that the sky really is falling. (The O'Hare UFO story became the Chicago Tribune's most read article online, ever.) Weather patterns are breaking down and reconstituting in alarming ways, winning deathbed conversions from climate change skeptics. And perhaps most incredible of all - or it would be, if it represented something like a departure from script - the White House is about to escalate the war in Iraq and likely thereafter engage Iran, inviting a Stalingrad scenario upon US forces in the Middle East.
War-making may seem too familiar and explicable to be rightly considered alongside the bizarre phenomena that are usually relegated to "news of the weird" irrelevance because they don't fit rational narratives. But there has often appeared to be a symbiosis of war and the weird, as though one helps to manifest or memorialize the other in this world, and perhaps somewhere else.

In folklore around the world, ghost stories are largely the domain of dead soldiers. Hawaii's Night Marchers, the huaka‘i po, are said to be the torch-bearing spirits of slain warriors. Legends of Ireland's fairy folk tell of them waging war in the skies. Foo fighters were drawn to military aircraft. And ancient battlefields and their graveyards are among the most fraught locations on Earth for paranormal activity.

"Wherever there has been great suffering, people are always seeing strange things," says Edward Tinney, former historian and chief ranger at Chickamauga-Chattanooga National Military Park. Chickamauga, like many Civil War battlefields, has seemingly been imprinted with the shadows of lives lost. Phantom cannons and drums are heard, and holographic representations of dead soldiers - "ghosts," commonly called - have been witnessed performing endless loops of routine. Most curious, Chickamauga is reportedly also home to a skinwalker-like shapeshifter known as "Old Green Eyes." Tinney describes an encounter one early morning in 1976 with a figure "wearing a long black duster, with shaggy, stringy, black, waist-length hair":

From the man's body language, Tinney feared he was about to be attacked, so he crossed to the other side of the road, he said. When the man became parallel with Tinney he turned and smiled a devilish grin, and his dark eyes glistened. Tinney said he turned to face the man and began to back-pedal, as his companion did as well. At that moment, a car came down a straightaway in the road, and when its headlights hit the apparition it vanished, he said.

On another battlefield, in the summer of 1969, three GIs were on guard duty near Da Nang in South Vietnam. Two years later one of them, Earl Morrison, told investigator Don Worley what they had seen:

And all of a sudden, I don’t know why we all three looked out there in the sky and we saw this figure coming toward us. It had a kind of glow and we couldn’t make out for sure what it was at first. It started coming toward us real slowly. And all of a sudden we saw what looked like wings, like a bat only it was gigantic compared to what a regular bat would be. After it got close enough so we could see what it was it looked like a woman. A naked woman. The color, she was black.

Worley: Her skin was black?

Witness: Right, her body was black, her skin was black, the wings were black, everything was black. But it glowed. It glowed in the night, kind of a greenish cast to it.

Worley: You mean she glowed or there was a glow around her?

Witness: There was a glow on her and around her. Everything glowed. Looked like she glowed and threw off a radiance. And we saw her arms toward the wings. They looked like a regular molded arm with the hand and fingers and everything, but they had skin from the wings going over. And when she flapped her wings it didn’t make any noise there at first. It looked like her arms didn’t have any bones in them or anything because they were limber just like a bat. She started going over us and we still didn’t hear anything. She was right straight up and when she got over top of our heads she was maybe 6 or 7 feet up.

Worley: What did you guys do, just stand there?

Witness: We couldn’t do anything - we didn’t know what to do. We just froze. We just watched what was going over cause we couldn’t believe our eyes.

Worley: Nobody went into panic, dove for the bunker?

Witness: No, we just looked because

Worley: Nobody fired at her?

Witness: No, it’s amazing what you would do under certain circumstances. And we just looked at it. We couldn’t believe it because we had never seen anything like this before in our lives....

Let's note here how often bizarre phenomena is ascribed to "outer space," when often it's simply because the events seem so out there. When we speak of anomalous sightings in the sky, we're referring to aerial objects, not objects beyond our own atmosphere. And with respect to war-making's interface with the weird, let's recall that Mothman's "nest" was an abandoned World War II munitions plant.

All of this is to suggest that war and conflict create fissures through which things can slip, the nature of which remain unknown to us, other than to say they don't appear to belong to this world. On the other hand, if we're talking about energies that desire egress into our world - or perhaps rather, our consciousness - then perhaps they don't simply wait for cracks to appear; they help to create them, and enter into co-dependence with the human actors who can create the disruptive conditions conducive to their manifestation.

According to West Salem's Coulee News, a 53-year old Native American and his 25-year old son were driving on Briggs Road the evening of September 26 when a figure the size of a man with a 10 to 12-foot leathery wing span flew at their windshield and up into the sky. "The creature had pronounced ribs, human-like legs with claws for toes and arm-like appendages tipped with claws. The creature’s eyes glowed yellow, and the face had a snarling expression, with rows of sharp teeth." To the older witness, "the creature seemed hungry. It also seemed angry to have been seen and gave an unearthly howl as it flew out of sight."

Both witnesses are said to have become violently ill after the sighting, and the father remained ill for a week afterwards. The son was so shaken by the encounter he won't speak of it, and the father will only because he wants people "to know what is out there," though "he believes the more he talks about it, the more power it gives the creature." I find this an intriguing construction. Not because, conversely, our ignorance might empower us, but for the man's intuition that this was not a flesh and blood creature, but an entity of thought-form.

Just a few years ago, much of the weird in the Western world appeared to be drying up and blowing away on the wind of mockery. That it's returned, along with war, may be more than the coincidence of psychology.