Understanding the Crisis in Ukraine 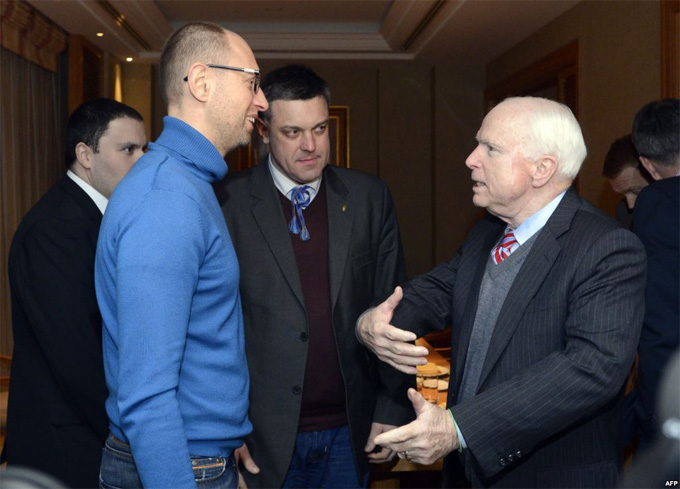 Sen. John McCain, the leading supporter of the Zionist war agenda in the U.S. Congress, talks to Arseniy Yatsenyuk (left), the new provisional prime minister, who happens to be Jewish, and Oleh Tyahnybok (center) of the "neo-Nazi" Svoboda party, in the Ukraine in December 2013. Isn’t it odd that a Ukranian Jew and a neo-Nazi should be working so closely together? 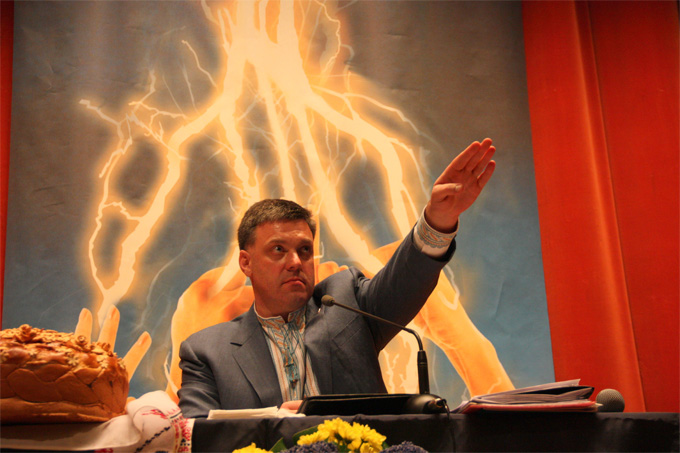 Oleh Tyahnybok says a "Moscow-Jewish mafia" rules Ukraine and that "Germans, Kikes and other scum" want to "take away our Ukrainian state." In 2005, Tyahnybok, a trained medical doctor, co-signed an open letter to President Yushchenko calling for a parliamentary investigation into the "criminal activities of organized Jewry in Ukraine." 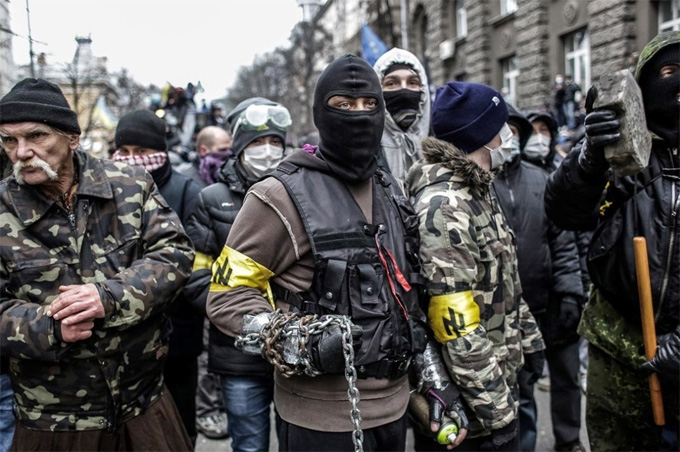 A battalion of Patriots of Ukraine paramilitaries tooled up in the midst of the protests. 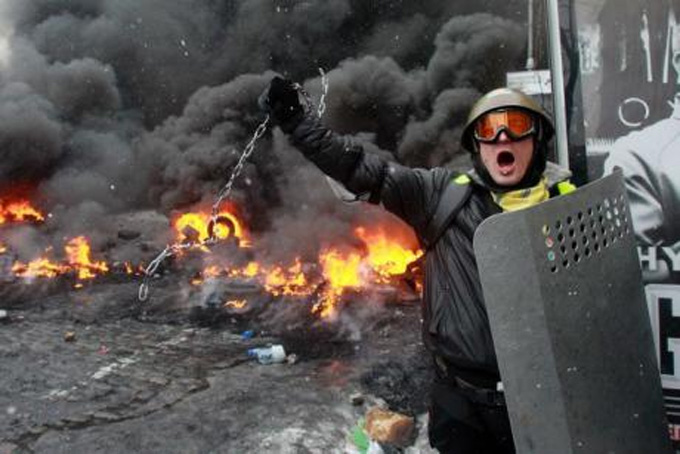 The far-right mobs were the vanguard of a protest movement that deposed the elected government of Ukraine, but who was directing the mob? 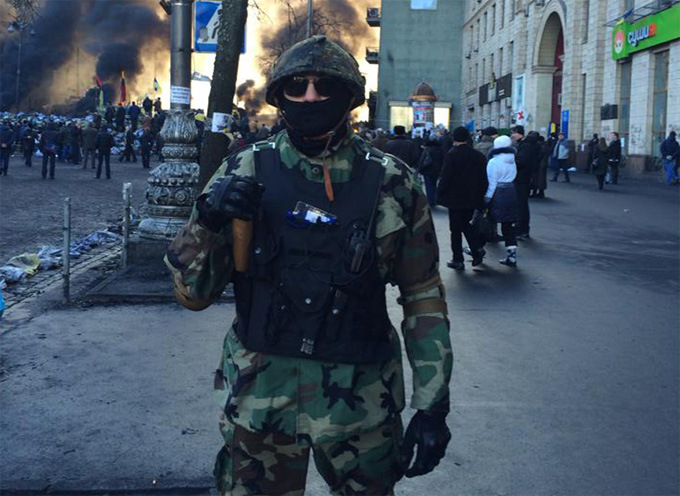 The Israeli platoon leader "Delta" - One of the leaders of the Svoboda mob of anti-government protestors is "Delta", an Israeli veteran of the IDF’s Givati infantry brigade, according to a report from the Jewish Telegraphic Agency (JTA.org). Delta, an Orthodox Jew in his late 30s, headed a force of 40 men and women, including several fellow IDF veterans, in violent clashes with government forces. As platoon leader, Delta says he takes orders from activists connected to Svoboda: “I don’t belong [to Svoboda], but I take orders from their team. They know I’m Israeli, Jewish and an ex-IDF soldier. Delta says he has frustrations related to being an outsider: “Sometimes I tell myself, ‘What are you doing? This is not your army. This isn’t even your country.’”

The crisis in the Ukraine is a very serious matter that pits the United States against Russia. While we don’t know how this crisis will end, we certainly know how it started and who has guided it to this dangerous point. In order to grasp what is really going on in Kiev, we need to understand who is pulling the strings in the so-called EuroMaidan protests and who has been appointed to head the unelected provisional government of the Ukraine.

I happen to have been reading Douglas Reed’s excellent historical analysis of Zionism, The Controversy of Zion, during the time when the world witnessed a regime change in the Ukraine, a regime change which has been forced on the people of the Ukraine by violent protestors in Kiev, the capital. 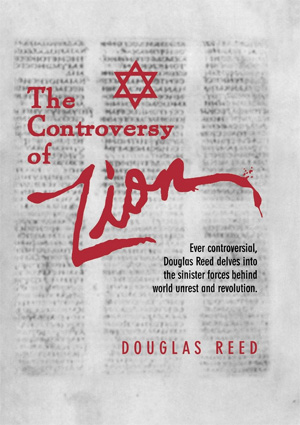 The Controversy of Zion is an excellent historical analysis of Zionism. This book explains the roots and diabolical and destructive goals of Zionism. It is highly recommended reading.

In the chapter entitled “The Warnings of Disraeli”, I found a most apt quotation for the situation in the Ukraine in a speech Benjamin Disraeli, the first Jewish prime minister of Britain, gave in the House of Commons in 1852:

The influence of the Jews may be traced in the last outbreak of the destructive principle in Europe. An insurrection takes place against tradition and aristocracy, against religion and property... the natural equality of men and the abrogation of property are proclaimed by the secret societies which form provisional governments, and men of the Jewish race are found at the head of every one of them.

After violent protestors seized government buildings, President Viktor Yanukovich fled the capital due to fear for his life and his family. This allowed the people guiding the protests in the street to push through appointments for a provisional government, which is headed by Arseniy Yatsenyuk. 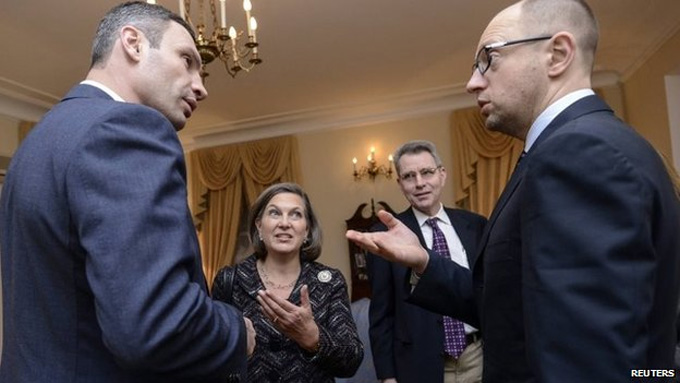 While violent protests created a coup situation,Victoria Nuland (This is the "Fuck the EU" Victoria Nuland by the way) of the U.S. State Department chose Arseniy Yatsenyuk (right) to be the prime minister of Ukraine.

As Ben Judah wrote in his 2009 article for ISN Zurich, “Ukraine: The Rise of Yatsenyuk”:

Yatsenyuk has two major issues that will come to a head before the elections. Firstly he is Jewish, which according to political analyst Taras Kuzio, could pose a major problem… Yatsenyuk’s Judaism is not his only identity related political problem. Members of his family were prominent in the Ukrainian nationalist movement, which will doubtless cost him votes in the country’s Russian-speaking east.

What is most disturbing about the regime change that brought Yatsenyuk to power is that he seems to have been put in that position through the actions of Victoria Nuland, an official of the U.S. State Department who is married to Robert Kagan. The Kagan family, Lithuanian Jews of Khazar ancestry, seems to have a permanent fiefdom at the State Department. [Kagan and Kahn are Khazar names that derive from a title of imperial rank in the Mongolian and Turkic languages equal to the status of emperor and someone who rules a khaganate.]

Read the rest of the story at bollyn.com