Researchers at Brown University have succeeded in creating the first wireless, implantable, rechargeable, long-term brain-computer interface. The wireless BCIs have been implanted in pigs and monkeys for over 13 months without issue, and human subjects are next. 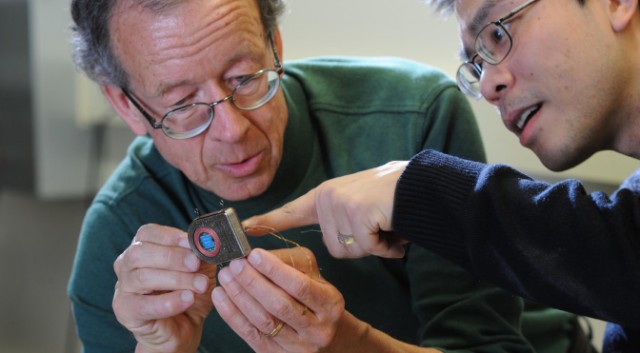 We’ve covered BCIs extensively here on ExtremeTech, but historically they’ve been bulky and tethered to a computer. A tether limits the mobility of the patient, and also the real-world testing that can be performed by the researchers. Brown’s wireless BCI allows the subject to move freely, dramatically increasing the quantity and quality of data that can be gathered — instead of watching what happens when a monkey moves its arm, scientists can now analyze its brain activity during complex activity, such as foraging or social interaction. Obviously, once the wireless implant is approved for human testing, being able to move freely — rather than strapped to a chair in the lab — would be rather empowering. 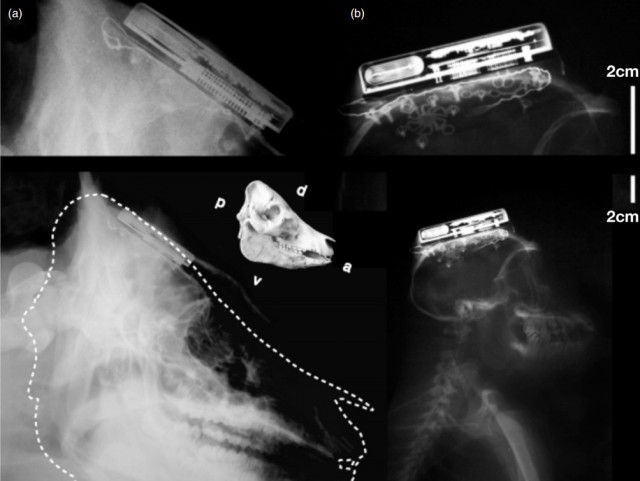 Wireless BCI installed in monkey and pig.
Brown’s wireless BCI, fashioned out of hermetically sealed titanium, looks a lot like a pacemaker. Inside there’s a li-ion battery, an inductive (wireless) charging loop, a chip that digitizes the signals from your brain, and an antenna for transmitting those neural spikes to a nearby computer. The BCI is connected to a small chip with 100 electrodes protruding from it, which, in this study, was embedded in the somatosensory cortex or motor cortex. These 100 electrodes produce a lot of data, which the BCI transmits at 24Mbps over the 3.2 and 3.8GHz bands to a receiver that is one meter away. The BCI’s battery takes two hours to charge via wireless inductive charging, and then has enough juice to last for six hours of use.

One of the features that the Brown researchers seem most excited about is the device’s power consumption, which is just 100 milliwatts. For a device that might eventually find its way into humans, frugal power consumption is a key factor that will enable all-day, highly mobile usage. Amusingly, though, the research paper notes that the wireless charging does cause significant warming of the device, which was “mitigated by liquid cooling the area with chilled water during the recharge process and did not notably affect the animal’s comfort.” Another important factor is that the researchers were able to extract high-quality, “rich” neural signals from the wireless implant — a good indicator that it will also help human neuroscience, if and when the device is approved.

Read the full article at: extremetech.com