UPS is Flying in Illegal Aliens Using Cargo Planes, Under Cover of Night

Youtube description: In the past, I have found the fact checking website – Snope s -- a useful source for quickly ferreting out bogus material.

However, I’ve heard they are not completely trustworthy in that they have a strong left bias, but have never had occasion to face it head on – until now.

Over the last 3 weeks, I produced a series of four YouTubes about the possibility of unvettable immigrants being flown into Pennsylvania on UPS so-called Quick-change or Combi jets. Pennsylvania has the largest population of the 6 states that officially approve of such activity.

...
More videos on this topic:

How this all started out was a few weeks ago, an anonymous person, coming out of a doctor’s appointment across the road from the UPS Cargo terminal at the Harrisburg airport after dark said he was shocked to see hundreds of people deplaning from a UPS cargo jet and immediately being whisked away by chartered busses. 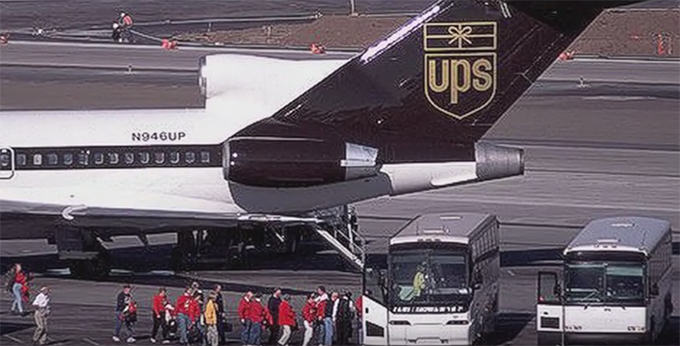 He jumped in his car and explained what he had seen as he followed two of the busses, using his cell phone to video what he could.

After my second piece appeared on Nov. 28, UPS officially responded in the Comments section of that YouTube:

"UPS operates a cargo airlines. The company has not been involved in any passenger flights into or out of Harrisburg, PA, or any other airport. The claims to the contrary are based on misinformation."

Interestingly, Steve Gaut is actually the Vice-President of UPS Public Relations.
I’ve invited him to link to me on Linked-in so we could discuss this, he hasn’t responded.

The worst part of UPS comment is the part I highlighted “or any other airport.”
It is impossible for me to believe that Steve does not know that UPS actually ran a passenger airline for a number of years using Quick Change cargo planes. In fact, one of the hubs for the UPS Airlines was in Pennsylvania!

Here is a Feb. 20, 2000 story that ran in the Philadelphia Inquirer’s web version, Philly.com:

“UPS has operated five of its planes as passenger aircraft since 1997 and has based two in Philadelphia since the spring of 1998 for the weekend use of Apple Vacations and Royal Caribbean Cruise Lines.”

Ok, so at least that part of Steve’s statement is … just not right.

The Combi aircraft concept has been around in the military for decades and the concept is still in use in the airline industry today.

Only 14 months ago, airline executive Satyendra Pandey, of GoAir a low-fare airline based in Mumbai, India wrote an article about Quick Change aircraft for Linked-In:

“The QC configuration has been used in … Europe, [the] United States and Canada where airlines operate a passenger flight configuration during the day and fly the same aircraft as cargo aircraft during the off-traffic hours.”

But here comes the good part.

“Some of the well-known users of such a system are Air Canada, Europe Airpost, and UPS Cargo.”

So it is possible that UPS still flies Combi aircraft to this day.

I explain my reasoning in the other 4 videos, but it’s basically that wascally Obama may be trying to sneak in as many of his buddies as he can in his last year in office, before the doors slam shut.

So now Snopes has jumped into the middle of this mess with deeply flawed analysis that dubbed the story: False.

Incredibly, the Snopes analyst sweetened the UPS denial quote – to exclude the part that is now a proven falsehood.

This story was researched by Brooke Binkowski. By her own account she is an award-winning journalist who has written for – oh my – NPR, CNN, and CBS.

Binkowski’s sentence introducing the UPS denial is an interesting piece of contradictory prose. Referring to the anonymous video that kicked all this off, she wrote:

“As the video at no time shows people, it is difficult to discern who they are or whether they have actually been loaded onto buses from UPS planes, as the video’s narrator claims.“

Yes, it is difficult to discern who a person is if you can’t see them. And if you can’t see them loaded into busses, how can you be sure they are in the busses?
“However, in a statement, a spokesperson from UPS flatly denied that the passengers were unloaded from their planes.”

Well, if the UPS spokesman “flatly denied” it, then why even bother to investigate further?

But it gets even worse.

“The narrator of the video can be heard saying he had just returned from a doctor's appointment; that means he was not getting off a plane.”

Uhhh, Brooke, your powers of deduction would put Sherlock Holmes to shame.
She presses on with her analysis: