US apologizes to Laos over cluster bombs, then sells them to pound Yemen

CIA’s nine-year secret war had made Laos the most heavily bombed country in human history. During his visit to that country on Sept 6, US President Barack Obama talked to local students, people and officials about America’s moral obligation to help Laos heal. Just three days later, the White House approved another $1.15 billion arms package to Saudi Arabia to bomb Yemenis who will have to suffer similar consequences for decades.

On September 6, President Obama visited Laos and offered Vientiane $90 million for the next three years to help clean up more than 80 million unexploded cluster bombs spread throughout the country.

Obama said even now, most Americans are unaware of their country’s deadly legacy there.

For nine years, between 1964 to 1973, US dropped more than 270 million cluster bombs on the impoverished country — more than it dropped on Germany and Japan during World War II — as part of an expanded war against the North Vietnamese. That conflict, known as CIA’s “secret war”,  made Laos, per capita, the most heavily bombed country in human history. 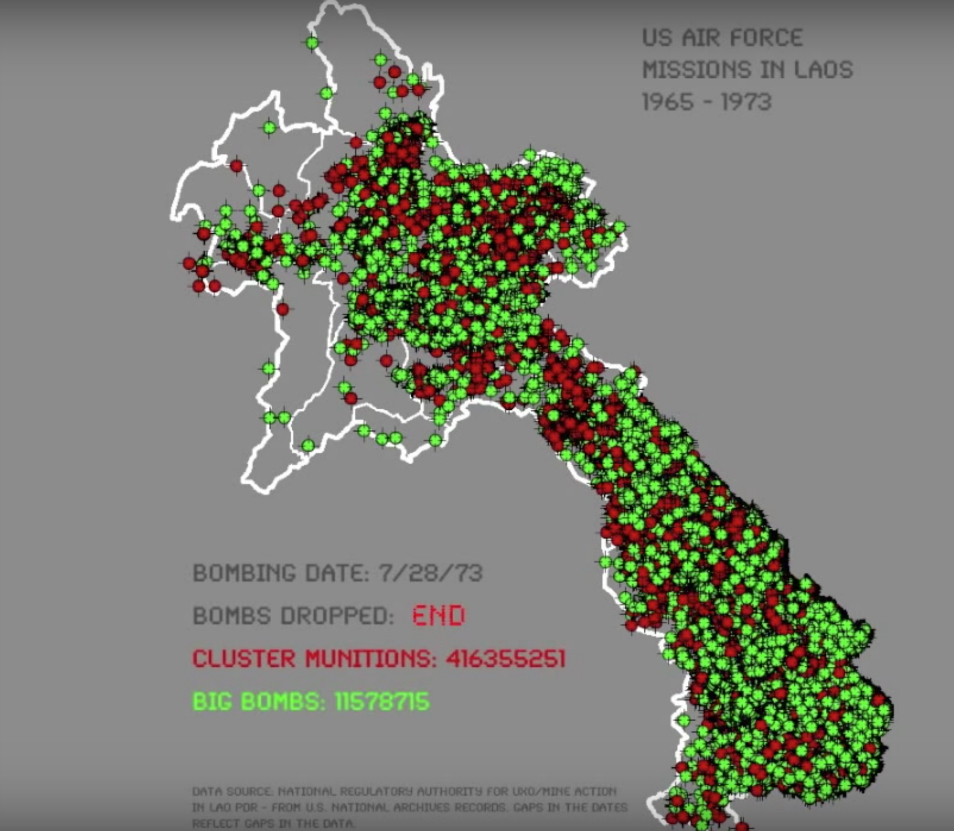 Cluster bombs scatter multiple sub-munitions, or bomblets, over a wide area, which often fail to detonate and become de facto landmines. These unexploded munitions thus continue to cause casualties and devastation for decades even after the conflict ends.

Children are especially vulnerable because they are attracted to the bomblets due to their resemblance to small balls or toys. As such, cluster bombs have been banned by an international treaty signed by 119 countries.

Not only do they exact great human cost physically via deaths and maiming, they also keep the country in an impoverished state for decades following the war.  In Laos, despite having fertile arable land, farmers are not able to use the land for agriculture due to the presence of undiscovered and unexploded bombs, nor are they able to develop the land for infrastructure, industry, or residential needs.

Thus the population targeted by mass cluster bombing campaigns are trapped in a vicious state of continuing war casualties, injuries, and poverty long after the conflict ends.

To date, less than 1% of the bombs have been removed, according to US-based NGO Legacies of War. Clearing mines is a careful and painstaking task, sweeping a few square yards at a time and then carefully detonating the discovered ordnance.

With current resources, Neil Arnold from the UK-based Mines Advisory Group assessed clearing the more than 80 million mines strewn throughout almost the entire country would take decades. The population of Laos are thus trapped in a country laden with mines and focused on survival, with little prospect for economic development or improving living standards for the country.

Addressing an audience of more than 1,000 students, business people and officials, Obama said “Given our history here, I believe that the United States has a moral obligation to help Laos heal.”

This gesture of trying to make amends for the damage US caused in the past is laudable, especially since Obama is the first U.S. president to visit Laos.  However, one wonders how sincere is this gesture, when US turns around and sells the same cluster munitions to Saudi Arabia for a similar bombing campaign of another poor country—Yemen—that is maiming children and will likewise keep the population trapped in dire poverty and devastation for the next several decades.[1]

This self-contradictory US policy is especially highlighted in that while Obama sees US offering partial payment for damages in Laos is a “moral obligation”, Congressman Ted Lieu (D-CA) sees continued US support for the Saudi war in Yemen as a “moral abomination.” Likewise, Senator Chris Murphy (D-CT) sees “an American imprint on every life lost in Yemen.”

It does not appear that way. On August 9, the White House approved another $1.15 billion arms package to Saudi Arabia, and gave Congress 30 days to review the deal and voice any concerns.  However, Congress was frustrated that the notification was deliberately given in the midst of the seven-week Congressional summer recess that just ended on September 6, with only a couple days to review the deal within the 30-day window.

Now with the resupply of the US-Saudi bombardment campaign, the Yemeni population is further condemned to a prolonged state of war, killing and maiming, and dire poverty for the next several decades.  As a token gesture, Secretary Kerry announced a $189 million humanitarian aid for Yemen, a Band-Aid compared to the multi-billion dollar arms packages used to inflict harm on the very same people.

Unfortunately, US disregard for the human cost in Yemen is likely to create new enemies. With no hope for a future, a new generation of Yemeni children are being recruited as soldiers by Islamic State and Al Qaeda that have taken hold of the war-torn country. And their eventual target is the US.