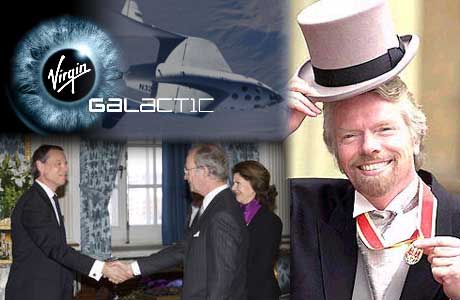 Ed note: Here is a very interesting news item concerning Knighted Sir Richard Branson's Virgin SpaceShip2 or the VSS2 rocket, quite and interesting abbreviation! Remember the old Nazi V2 rockets? Squeezing in a "SS" in there doesn't make things less interesting. If you continue reading we also bump into the 2012 date towards the end of the article. Also see: From Kiruna to space - space tourism lifts off in 2012

One more thing: On the same day that the agreement between Virgin galactic and Swedish government was signed, Jan. 26, The Swedish astronaut Christer Fuglesang was at a reception by the King and Queen at the Royal Palace, and as reported by official news sources Christer brought a “secret gift” for the King. There where no interviews or photo opportunities during this event!

The Swedish government on Jan. 26 announced an agreement with suborbital space-tourism company Virgin Galactic that Swedish officials believe will lead to midsummer and mid-winter flights of Virgin's SpaceshipTwo vehicle to observe the Aurora Borealis from Sweden.

The agreement, signed at the proposed future launch site in Kiruna, Sweden, calls for no exchange of funds. Swedish officials say the Kiruna facility, already known for launching suborbital sounding rockets and atmospheric balloons, has sufficient infrastructure to accommodate Virgin Galactic and that no new investment is needed.

Olle Norberg, head of the Swedish Space Corp. Esrange launch site in Kiruna, said the memorandum of understanding signed with Virgin Galactic calls for Swedish authorities to prepare a regulatory regime modeled on what the U.S. Federal Aviation Administration (FAA) is doing in the United States.

Norberg said in a Jan. 26 interview that the Swedish government also will take charge of the technology-export approvals needed to export SpaceshipTwo and related hardware to Sweden during flight campaigns.

As a demonstration of its interest, Esrange authorities have proposed to launch a small sounding rocket in March 2008 into the Aurora Borealis.

Equipped with cameras, the flight would serve two purposes. It would give prospective passengers a sense of what they will view from their windows aboard SpaceshipTwo, and it will give SpaceshipTwo designer Burt Rutan and his company, Scaled Composites, a sense of what effect, if any, the Northern Lights might have on both the passengers and the electronics gear carried by SpaceshipTwo.

"Apparently this has never been done before, to fly through the Aurora Borealis," Norberg said. "We have images from above and below, but we have never taken pictures from within."

Will Whitehorn, president of Virgin Galactic, said the company remains on track to complete prototypes of SpaceshipTwo in December, with test flights in New Mexico to begin in 2008 and continue until full FAA certification is received.

Whitehorn said the Kiruna site is the first agreement on SpaceshipTwo flights signed outside the United States. The company's U.S. operations are based in New Mexico.

Whitehorn said an existing 5,000-square-meter hangar at the Esrange facility "is perfect for us," and that no capital investment is expected of Sweden. He said he was surprised to learn that even mid-winter flights from Esrange will not require SpaceshipTwo to be equipped with de-icing gear because the air is dry enough to prevent ice buildup on the aircraft.

Norberg said Sweden, which has launched rockets with U.S. motors for experiments in weightlessness for years, does not view the U.S. technology-transfer regime, known as International Traffic in Arms Regulations, to be a problem.

"We have great confidence in the work that Virgin Galactic and Scaled Composites is doing, so we feel this is the time for our spaceport," Norberg said.

Norberg said the partnership with Virgin Galactic will allow Spaceport Sweden supporters to work with the suborbital spaceflight firm to tackle the myriad of details required to safe commercial launches.

"It was a complete space craze here in Sweden. Christer's flight was reported on a minute-by-minute basis," Norberg said. "We're in a very good movement where the people's interest is really peaking, and we'll be able to use that kind of atmosphere."

Fuglesang received a hero's welcome this week after returning to Sweden, where he is expected to dine with King Carl XVI Gustaf and Queen Silvia tonight.

"So people are really fascinated by spaceflight," Norberg said.

VIDEO: How to Build a Tour-Ship for Space

All About Space Tourism