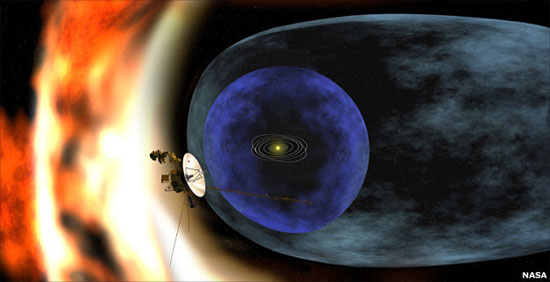 In about five years, the 33-year-old Voyager 1 spacecraft will be the first man-made object to leave the Solar System. Five years might seem long on Earth, but when you’re an object drifting through space for decades, it’s relatively quick.
We all wish we could go to space — but getting your astro-wings takes a hell of a lot of training. The Voyager 1’s approach towards the end of our Solar System is another reminder of what we puny little humans are capable of in this vast universe.

The Voyager 1 was originally shot into space in 1977 to send back information on our system’s outer planets. In 1989, the probe completed that task and rather than waste the chunk of metal, NASA sent it sailing towards the edge of space. Twenty-one years later and 10.8 billion miles away from Earth, the Voyager 1 is finally approaching the void we’ve all been dreaming of.

What kind of information will the Voyager 1 send back when it does leave the Solar System? I’m not a NASA engineer so I can’t tell you, but I’m sure that it will create new revelations that will revive our dreams of interstellar travel.

Voyager is approaching the edge of the bubble of charged particles the Sun has thrown out into space.