Wallenberg, the aristocrats of Swedish business and the Order of the Seraphim 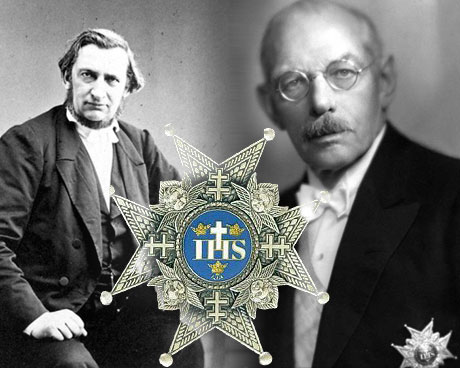 The Swedish Wallenberg's are like the equivalent to the United States Rockefeller’s or Europe’s Rothschild’s.

Swedish National Broadcasting (SVT) has just run a three-part documentary about the Wallenberg's, and it includes some interviews with the otherwise reserved family members. The series seems to have sparked some interest, so it might be convenient to briefly relay some info about them here. I have only seen parts of the series so far, but I will screen it myself soon and I might write something more about it later on.

Here are a few excerpts from a recent article about the Wallenberg’s from thelocal.se:

Who are they and why are they famous?

The Wallenberg’s are Sweden's most powerful financial family. Just over 150 years ago André Oscar Wallenberg started literally minting it when he established Stockholms Enskilda Bank. Since then the family's power has become almost regal in its scope. In fact one of them, Marcus "district judge" Wallenberg, was a Knight of the Order of the Seraphim.

The family has formed a seemingly unbreakable bond with the Swedish economy. In 1916 they set up Investor, an investment company with a major interest in Scania, Ericsson, Saab, ABB, Electrolux, AtlasCopco, AstraZeneca, and a ridiculous number of others besides.

Anyway, why are these Wallenbergs in the news?
National broadcaster SVT has just run a three-part documentary on the family, which has planted bums firmly on seats all over the land.

Why? They just sound like a bunch of suits with visible history stains.
Ah yes, but these particular suits constitute the very fabric of Swedish society. And they very rarely give interviews. If we look at Sweden as being divided between state and capital, they have supplied das Kapital.

And the Social Democrats have been der Staat?
Precisely. And since we've come over all German, it's probably worth mentioning that the Wallenbergs have a Second World War hero in their ranks. While off on business trips to the continent Raoul Wallenberg was soon confronted with the treatment of Jews by Nazi Germany. In Budapest he acquired diplomatic status and saved thousands of Hungarian Jews by issuing them with false protective passports and claiming they were awaiting repatriation to Sweden.

Nice work! Was he treated as a hero when he returned to Sweden?
Unfortunately he never did return. He was arrested by the advancing Soviet forces, who took him to be a US spy. He was never seen again.

A tragic end...
Indeed, and there are other tragic tales too. Remember the bank that began the family fortune?

Yes.
Well, Marc Wallenberg was its chief executive when, in 1971, it was to be merged with another bank to form what is now SEB. Marc committed suicide that same year, possibly because the onus on him to perform became too great. His father, Marcus "Dodde" Wallenberg had pushed the merger through against his wishes.

Dodde seems to have been a central Wallenberg.
Yes, he was. He was also a dab hand at tennis and competed for the Swedish Davis Cup team in the mid-1920s.

Good for Dodde. Are there any other Wallenbergs with silly nicknames?
Oh yes, tons of them. There was Jaju (Jakob) for example, who was Dodde's older brother. Both were involved in "the Bosch Affair" at the end of the Second World War, which led to them being accused by the USA of collaborating with Nazi Germany. The SVT documentary gives the brothers the benefit of the doubt on this score, particularly Jaju, whose name was mud after the scandal broke.

As if it wasn't bad enough being called Jaju! Any more?
Yes. There's Pirre (Peter), of course, born in 1926 and still a major power broker in what is commonly known as "the Wallenberg sphere". Then there's his son Poker (Peter), who's on the board of Investor. And Husky (Marcus), who is chairman of the board of SEB.

What's going to become of them now that they have been giving an airing on the telly?
They will probably return to the motto that has served the family so well over the years: Esse non videri - to be, not to be seen.

Obviously there’s a lot more to say and write about concerning these guys – but this short piece might serve as a nice introduction for future articles and writing.

You can read more (but not that much) about the Wallenberg family over at this wikipedia thread.

Another thing worth mentioning again is that Marcus Wallenberg Sr (1864–1943), was a Knight of the Order of the Seraphim. This Order is exclusive to Sweden and I find this interesting since Seraphim is Hebrew for a class of Angel (the highest one). I think that this further strengthens the evidence for a Hebrew/Kabbalistic connection to Sweden and the “original language” that I elaborated on in the article about Johannes Bureus and the ancient runes entitled: Dee's 007, Tubal-Cain and the Rune of the "Original Language"

On the insignia of the Order of the Seraphim is also the three crowns. The origins of the three crowns and the connection to the runes and the Kabbala is also discussed in this article: Johannes Bureus, the Renaissance rune magician

And since we have made the connection to John Dee and his Enochian magic this is what we can read about the Seraphim in the Book of Enoch:

Seraphim in the Book of Enoch
The 2nd-century BC Book of Enoch also mentions the Seraphim, but the term used is the Greek drakones (δράκονες meaning "serpents"). Enoch was never accepted in the Hebrew canon, but it was widely read and quoted by early Christians -- most notably in the Epistle of Jude, which was included in the New Testament canon. From the usage of the word "saraph" in this late text, Christian exegesis identifies as seraphim the snakes responsible for the deaths of the blaspheming Israelites in Numbers chapter 21:"And the LORD sent fiery serpents. And the LORD sent fiery serpents (Sraphim, in hebrew)".

And if we continue to read about the Seraphim we see that there are some interesting names attributed to this angelic order:

Elaborating upon the Christian celestial hierarchy that was created by Pseudo-Dionysius the Areopagite, the expanding modern literature of angelology has assigned many names to the unnamed seraphim.

Well, we have to return to that in another article. In the meantime you can read some more official, but still interesting stuff:

Order of the Seraphim 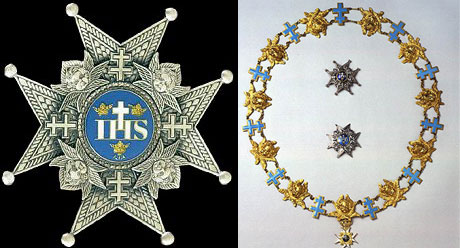 The Order of the Seraphim (in Hebrew for a category of Angels) or the Order of His Majesty the King (Swedish Serafimerorden or Kungl. Maj:ts Orden) is a Swedish Royal order of chivalry created by King Frederick I of Sweden on 23 February 1748, together with the Order of the Sword and the Order of the Polar Star. After the reorganization of the orders in 1975 the order is only awarded to foreign heads of state and members of the royal family. The order has only one grade with the dignity of Knight (Member for women and clergymen), and is the foremost order of Sweden.

When a knight of the Order dies, his coat of arms is hung in the former royal burial church Riddarholmskyrkan in Stockholm, and when the funeral takes place the church bells are rung constantly from 12:00 to 13:00.

Insignia
Knights and Members of the Order wear the badge on a collar (chain) or on a sash on the right shoulder, and the star on the left chest:

* The collar of the Order is in gold, with eleven double crosses enamelled in blue and eleven seraphim.

* The badge of the Order is a white-enamelled gilt Maltese Cross, with a gilt double cross on each arm of the cross, and gilt seraphim between the arms of the cross. The obverse central disc is in blue enamel, with a white-enamelled "IHS" Christogram amongst Three Crowns; beneath this are three nails with which Jesus Christ was crucified. The reverse central disc is also in blue enamel, with white-enamelled letters "FRS" (Fredericus, Rex Sueciae, Frederick King of Sweden). The badge is topped by a gilt crown.

* The star of the Order is the same as the obverse of the badge, except the crosses and seraphim are in silver and without enamel, and is not topped by a crown.

* The ribbon (sash) of the Order is pale blue.

The above on the Order of the Seraphim is from: http://en.wikipedia.org/wiki/Order_of_Seraphim