Viral pathogens pose serious health threats worldwide. For clinical viruses such as HIV or hepatitis, emerging viruses such as avian or swine influenza, and highly lethal viruses such as Ebola or smallpox that might be used in bioterrorist attacks, relatively few therapeutics or prophylactics (preventatives) exist. Most therapeutics that do exist are highly specific for one virus, are ineffective against virus strains that become resistant to them, or have adverse effects on patients.

As part of the PANACEA (for Pharmacological Augmentation of Nonspecific Anti-pathogen Cellular Enzymes and Activities) project, researchers from MIT Lincoln Laboratory have developed and demonstrated a novel broad-spectrum antiviral approach, called DRACO (for Double-stranded RNA [dsRNA] Activated Caspase Oligomerizer). DRACO selectively induces apoptosis, or cell suicide, in cells containing any viral dsRNA, rapidly killing infected cells without harming uninfected cells. As a result, DRACO should be effective against virtually all viruses, rapidly terminating a viral infection while minimizing the impact on the patient.

In work reported in the journal PLoS ONE, DRACO was shown to be effective against all 15 viruses that the team has so far tested in cells, including cold viruses (rhinoviruses), H1N1 influenza strains, adenoviruses, a stomach virus (reovirus), a polio virus, dengue fever virus, and several members of hemorrhagic fever arenavirus and bunyavirus families. DRACO was also demonstrated to be nontoxic in 11 different cell types representing various species (e.g., humans, monkeys, mice) and organ types (e.g., heart, lung, liver, kidney). In addition, experiments demonstrated that DRACO not only is nontoxic to mice but also can save mice infected with a lethal dose of H1N1 influenza. Currently, the team is testing additional viruses in mice and beginning to get promising results with those as well. 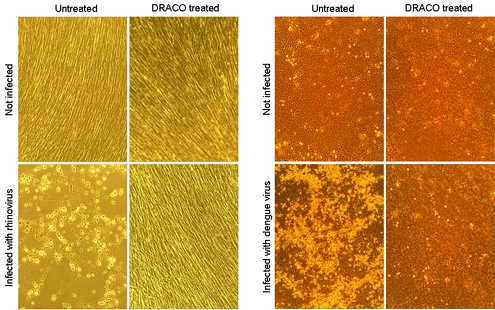 Dr. Rider says that although more extensive testing is needed, "DRACO has the potential to revolutionize the treatment and prevention of virtually all viral diseases, including everything from the common cold to Ebola." He adds, "Because the antiviral activity of DRACO is so broad spectrum, we hope that it may even be useful against outbreaks of new or mutated viruses, such as the 2003 SARS [severe acute respiratory syndrome] outbreak."

This work is funded by a grant from the National Institute of Allergy and Infectious Diseases and the New England Regional Center of Excellence for Biodefense and Emerging Infectious Diseases, with previous funding from the Defense Advanced Research Projects Agency, Defense Threat Reduction Agency, and Director of Defense Research & Engineering (now the Assistant Secretary of Defense for Research and Engineering).

Ed Comment: You got to love the symbolic acronyms that constantly are used by pharma, science and others.

Draco (lawgiver) - He replaced the prevailing system of oral law and blood feud by a written code to be enforced only by a court. Because of its harshness, this code also gave rise to the term "draconian". Listen to our program on the origins on the Law system.

You couldn’t make it up ...well, by now you could.