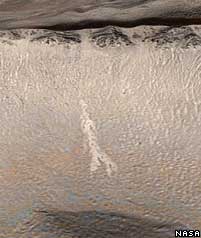 Nasa says it has found "compelling" evidence that liquid water flowed recently on the surface of Mars.
The finding adds further weight to the idea that Mars might harbour the right conditions for life.

The appearance of gullies, revealed in orbital images from a Nasa probe, suggests that water could have flowed on the surface in the last few years.

But some scientists think these fresh gullies could also have been cut by liquid carbon dioxide (CO2).

Scientists at the San Diego-based Malin Space Science Systems, who operate a camera aboard MGS decided to retake photos of thousands of gullies in search of evidence for recent water activity.

Two gullies that were originally photographed in 1999 and 2001, and imaged again in 2004 and 2005, showed changes consistent with water flowing down the crater walls, according to the study.

In both cases, scientists found bright, light-coloured deposits in the gullies that were not present in the original photos. They concluded that the deposits - possibly mud, salt or frost - were left there when water recently cascaded through the channels.

Other scientists think it possible that gullies like this were caused not by water but by liquid carbon dioxide.

One of the reasons for favouring CO2 was that computer models of the Martian crust indicated water could exist only at depths of several kilometres. Liquid carbon dioxide, on the other hand, could persist much nearer the surface where temperatures can drop as low as -107C.

Oded Aharonson, an assistant professor of planetary science at the California Institute of Technology (Caltech) said that while the interpretation of recent water activity on Mars was "compelling," it was just one possible explanation.

Aharonson said further study was needed to determine whether the deposits could have been left there by the flow of dust rather than water.

Deciding what was responsible for the features is a pressing question that has important consequences for the likelihood of life on Mars. Scientists have proposed that reservoirs of liquid water could exist beneath the Martian surface, providing a habitat for microbial life.

"This underscores the importance of searching for life on Mars, either present or past," said Bruce Jakosky, an astrobiologist at the University of Colorado at Boulder, who had no role in the study. "It's one more reason to think that life could be there."

Mars Global Surveyor abruptly lost radio contact with Earth last month. Attempts to locate the spacecraft, which has mapped the Red Planet since 1996, have failed, and scientists fear it is lost.

Nasa's Mars rovers, which landed in 2004, have sent scientists back equally strong evidence that liquid water flowed on the surface in ancient times, based on observations of alterations in ancient rocks.

"We're now realising Mars is more active than we previously thought, and that the mid-latitude section seems to be where all the action is," said Arizona State University scientist Phil Christensen, who was not part of the current research.

Details of the work appear in the journal Science.