We Are All On the Beach, And That Tide Rises Fast

"It's been nice, Dwight Lionel. It's been everything...Oh Dwight, I’m so frightened."
--Moira Davidson, On the Beach 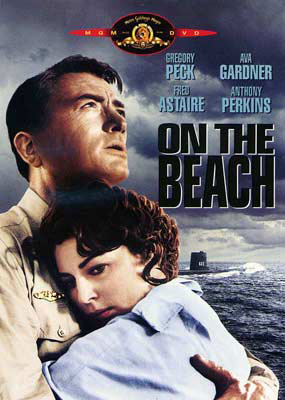 Our fears in childhood were both more awful and bearable than the ones in adulthood. They were awful because our naive and spectacular imaginations could conjure any scenario in technicolor clarity -- with mom and dad nowhere in sight, the branch scraping the bedroom window always sounded more like the gentle scuff of a witch's broom. But no matter how choking our terrors, we somehow knew we were safe and loved, and that the rise of the Sun would cast all boogeymen back into the shadows from whence they came.

The fears of an adult are not nearly so transient. We no longer suspect monsters lurking 'round every corner, but anxiety and worry are still constant companions. Will I make next month's mortgage payment? ...Does my boss still like me? ...Am I growing fat and ugly? ...Will the Lakers make the playoffs? These inane yet seemingly vital mentations clang in our head like the dullest cowbell. And underneath each concern, mostly hidden and unacknowledged, is the taproot of all fear, the apogee of all nightmares. It is the question that jolts men awake at night and leaves them groping in the dark for a bottle or a gun. In the end, it is the only question that matters, and very few human beings find to it a satisfactory answer. The question is:

Does my life have meaning?

No child pauses in the middle of play to worry what, ultimately, his life might amount to. But as adults, that is ALL we think about, day and night, with at best only passing relief. Am I going to be someone?
Am I someone yet? Will I ever be loved? I don't feel loved. Will this huge gaping hole right down the middle of me ever be filled for more than a few seconds?

This transformation of fear has been witnessed in my own life. When I was a kid, I had an overwhelming terror of nuclear war. I watched all of the "nuke" movies in morbid fascination. Threads, The Day After, Testament – these films depict how it might feel to hear the emergency broadcast signal on the radio and then be told by a reporter that the missiles are flying. In a matter of minutes, either everything would be over, or you would be left with your loved ones to wander the remains of a scorched and dying world. The radiation sickness, the blistered flesh, the agony of watching family and friends die -- what could be more fearsome, or provide greater proof of an insane and unloving God?

But as an adult, the nuke movies arouse in me completely different emotions. I recently viewed the 1959 classic On the Beach, a sober contemplation of a post-apocalyptic world. A global nuclear war has occurred, and residents of Australia spend months awaiting the inevitable arrival of the deadly fallout. To maintain a sense of normalcy and perhaps sanity, most try to lead the remainder of their lives as if little has changed. Hobbies and interests are pursued even though death is just around the corner. The philosophical question the film begs is, what, if anything, is worth doing when you know that everyone, yourself included, is going to die?

What makes the film so scary is not its frank depiction of physical mortality -- many Hollywood films feature extraordinary body counts, and the effect is more desensitizing than shocking. And we all somehow live with the knowledge that our bodies will one day turn to dust. This reality can be coped with in any number of ways, sometimes through flat denial, and also by the belief in an afterlife that is basically a brighter, happier version of Earth. But On the Beach confronts us with the question of why we place so much value on impermanent and trivial things. Can we really find meaning by giving our hearts to anything that we are certain to lose?

The end of the physical body is not the ultimate human fear. If it were, no one would commit suicide, or risk his own life to save another. Our ultimate fear is that life itself has no true or lasting meaning. In this fear, even the question of whether consciousness survives physical death becomes moot. A person who knows no meaning would probably turn down physical immortality, even if he believed that death was truly the end of awareness. Atheists kill themselves all the time. After all, without meaning, what have we to lose?

The logical conclusion is that meaning can only be found through a connection with permanence. But in a world where everyone and everything is destined to die, permanence seems only a nebulous concept. Nothing in objective reality lasts forever -- not even love, by all appearances, since every object to which love is directed inevitably dissolves. And this is how the world defines "love"; we have always been taught that love only exists when it is attached to a particular person or thing.

We tend to think of love as a very intense and even painful emotion. We give our hearts completely to our romantic partners and children and closest friends, and when these treasured relationships are lost (as they will be), the result is grief and even sometimes death. If we are doomed to lose love, then like the unfortunate souls in On the Beach, we've no choice but to ask ourselves what, ultimately, is the point of anything?

But the "radical" possibility put forth by history's great teachers is that love itself is indestructible. The purpose of life, they say, is not to seek people and things to love, but to perfect in oneself a state of lovingness. The core teaching of Jesus is to "love thy neighbor as yourself," without conditions or exceptions. This is not an instruction to direct extreme emotion to objects (including people), but rather to carry love in one's heart in every situation. In fact, this is a necessary practice simply for good mental health in a world dominated by impermanent forms.

Genuinely happy people are not in love with objects; they are in love with life. A yogi living alone in a cave may be completely loving, while a person intensely involved in relationships may not know love at all. This principle can be witnessed in the inevitable misery associated with romantic feelings -- ironically, the desperate "need"
for a partner's affections actually destroys one's ability to love them. We all know the terrible consequences of jealousy and possessiveness; the homicidal spurned lover is so common as to be cliche. The challenge, then, is to fall in love with the part of ourselves that makes it possible to love another.

Another Hollywood film that presents this principle beautifully is the cult classic Harold and Maude. It's the story of a suicidal teenage boy who finds meaning when he falls in love with a very elderly woman. One day, Maude decides to take her own life by overdosing on pills. Holding dying Maude's hand and blinking back tears, Harold tells her that he loves her. And Maude replies, "That's great, Harold. Go on out and love some more."

This lesson may seem impossible to learn, but do we have any choice?
"The ocean moans over dead men's bones," and "Everybody has to meet his waterloo." That great sea of eternity inches ever closer and will finally consume every one of us. But thank God, we need not wait for death to immerse ourselves in this tide. An ocean of permanence awaits in our hearts, and no barrier can hold forever against the gentle crash of its waves. Yes, inevitability is scary, but it can also be comforting. And everyone knows a day at the beach is relaxing and fun...so why not make it a lifetime?

"Roll on, deep and dark blue ocean, roll. Ten thousand fleets sweep over thee in vain. Man marks the earth with ruin, but his control stops with the shore."
--Lord Byron