What a maze-solving oil drop tells us of intelligence 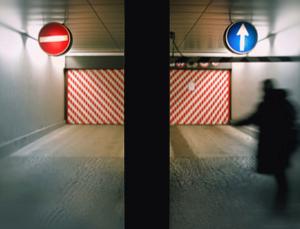 Dyed pink and doped with acid, the small, inanimate drop of oil is deposited at the entrance to the maze - and immediately sets off towards the exit. A few minutes later, it emerges at the other end.

No one would equate this apparently astonishing problem-solving with intelligence. But new theories on human intelligence and the brain suggest the simple molecular processes governing the oil droplet's apparently smart behaviour may be fundamentally similar to those that govern how we act.

A decade ago Toshiyuki Nakagaki, now at Hokkaido University in Sapporo, Japan, reported that the slime mould Physarum polycephalum could negotiate a maze to reach food at the exit. Boldly, his team wrote in Nature: "this implies that cellular materials can show a primitive intelligence".

Now Bartosz Grzybowski, a chemist at Northwestern University in Evanston, Illinois, has shown that a simple oil droplet floating on top of an aqueous solution can also navigate a complex maze - in this case to reach an acid-soaked lump of gel at the exit.

Obstacle course. On the left, a droplet moves toward the dashed box along the shortest path. On the right, the droplet goes astray at two locations but corrects its trajectory and ultimately finds the shortest path. CREDIT: ISTVAN LAGZI, BARTOSZ GRZYBOWSKI, ET AL., JACS
Nakagaki is unwilling to extend the notion of intelligence to the oil droplet. "It is nonsense for me to consider intelligence in non-living systems," he says. But Andy Clark, a philosopher at the University of Edinburgh, UK, suggests that this does not do Grzybowski's set-up justice. Much of biology boils down to chemistry, Clark points out. "The mere fact that it's just physical stuff doing what it does can't be a strike against the droplets," he says. "Whatever intelligence is, it can't be intelligent all the way down. It's just dumb stuff at the bottom."

So why does the dumb droplet appear to be moving in an intelligent way? The answer is all around us, says Clark. The aqueous environment surrounding the droplet is structured to such a high degree by the pH gradient that it makes the dumb droplet appear smart. "It's a neat demonstration of just how much problem-solving punch you can get from a minimal internal structure in a nicely enabling environment."

Humans rely on the same trick, says Clark. It forms the basis of the extended mind theory, which Clark and David Chalmers, now at the Australian National University in Canberra, proposed in the late 1990s. They say the division between mind and environment is less rigid than previously thought; the mind uses information within the environment as an extension of itself.

While a person can learn a route through a maze and then negotiate the maze by memory, a person would appear equally smart to an outsider if they simply followed signposts in the maze to reach the exit. "A smart person, like the droplets, is often smart due to canny combinations of internal and external structure," says Clark.

It's a powerful idea that is filtering into theories about artificial intelligence. Rolf Pfeifer at the University of Zurich in Switzerland is exploring how to "outsource" some of the cognitive load of artificially intelligent systems. He points out evidence that the way our knees absorb the energy of a jump is controlled by the material properties of the leg itself: the reactions happen too quickly to be controlled by the brain or even a reflex. Through careful choice of materials, Pfeifer is now applying that idea in his robot creations by designing body parts that are capable, to some degree, of autonomously reacting to their environment.

Karl Friston, a neuroscientist at University College London, goes further. He says the human brain and the oil droplet do share some fundamental attributes, in particular in the way they both respond to their environment.

This ties in with Bayesian brain theory, which pictures our brains as attempting to understand the world by observing the environment and making, then improving, predictions about what will happen next. Friston is working on a unified theory of the brain (New Scientist, 31 May 2008, p 30) that mathematically describes how the brain continually improves its predictions by observing its environment and minimising errors.

He sees "deep similarities" between his theory and the droplet's movement. As the droplet moves towards the exit it is moving towards a state of chemical equilibrium, where it has minimised its free energy.

Work on artificial neural networks has shown that the same principles apply to these networks: by minimising the difference between the predictions a network makes and what it actually senses happening, the network is also driven towards equilibrium. Friston is now showing how the equations that govern neural networks and thermodynamic systems apply to real brains.

The bottom line is that the "dumb" droplet is simply obeying fundamental principles. But because it is using exceptionally ordered information in the environment along the way, it moves "in an apparently purposeful way", Friston says.

None of this, of course, justifies calling Grzybowski's oil droplet "intelligent". But it does suggest that by highlighting the importance of the environment, his maze experiment may have hit on a fundamental connection between apparently intelligent behaviour at all levels: the ability to read and respond to environmental cues.