Why a Caucasian-Japanese is not Perceived as Japanese 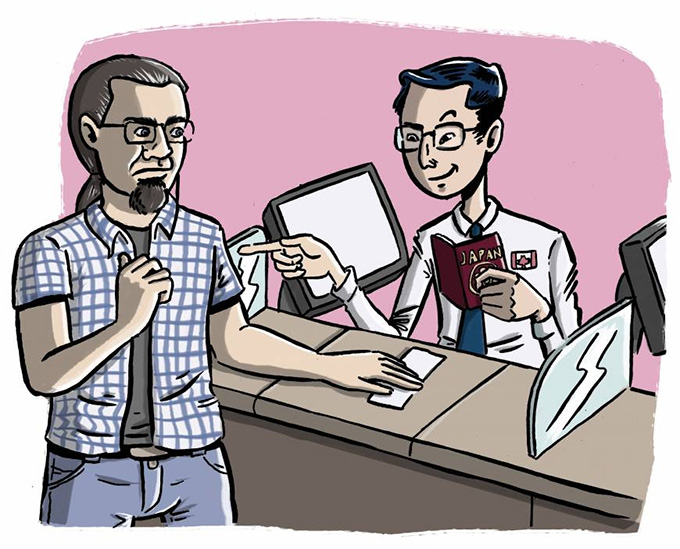 The Japan Times has a hilarious article about a White guy who is angry and upset at the horrible and racist world we live in because customs agents and border agents are questioning his "right to be Japanese."

It's seems that Debito Arodou's experience at border crossings suggest that no one takes a White guy seriously, for claiming to be Japanese.

“A Japanese passport? You don’t look Japanese,” the article begins.

Yet I bet that not one of those same customs agents would flinch at a non-European claiming to be from a European country. Why is that? It's because the kind of multiculturalism we're seeing is only happening in countries founded and built by Europeans. It shows the hypocrisy and double standard of the concept that anybody, no matter where they are from - or where their parents were from - can be seen as a part of the people of the country they were born in.

The piece from Japan times is hilarious, a great example of how no one expects a White guy to be Japanese (even if that means just being a citizen/resident of Japan and hold a Japanese passport). Would these same customs agents say "you don't look Swedish" to an Asian that was born in Sweden and has a Swedish passport? Highly unlikely. Why is that? Because a reaction like that would be "racist" and "offensive," right?

As indicated by the encounters this White Japanese guy is having, people have a natural reaction in one instance but "can't have it" in another.

"Oh, you don't look Japanese." Highly offensive, right? Hopefully not to the Japanese, whom I hope want to preserve who they are and how they look, like all people.

If the situation would have been reverse, the border agents in question would be fired on the spot and there would be a media storm, not just one article in a Japanese online newspaper.

You see, in countries founded and built by Europeans, everyone - no matter where they or their parents actually are from - must be accepted as being from the country they were born in and belonging to that people. As we see by this example, however, that really only works in one direction. Isn't that interesting?

The Japanese guy (the White guy) also notes how some commenters to his story, bring out the "White privilege" card for snapping at an Asian bank teller ...in Canada. "You're White, so you had the upper hand. It's not right to talk like that to a Metis (minority) in Canada.""

I's getting absolutely absurd. It's just like how the pro-muslim and pro-gay division is breaking up the social justice warriors in Sweden. They don't know where to direct their attention in the victim hierarchy, who is the most victimized and oppressed.

Cultural Marxism has created an insane psychotic monster ...and that monster is now starting to eat away at itself. Just stand to the side and watch it die.

Here is the story:

Claiming the right to be Japanese
From: japantimes.co.jp

I get this all the time. Understandably: Most people don’t expect a Caucasian to have Japanese citizenship.

It’s just a shame they so carelessly articulate their surprise. No matter where I go, a natural curiosity about my background soon turns into vocalized judgment.

“What an unusual name. Where are you from?”

Their most common response: “But you don’t look Japanese.”

Or Customs and Immigration at any border: “What’s with the Japanese passport?”

Again, “You don’t look Japanese.” (That’s the milder reaction. In Jamaica, officials took my passport around the office for a laugh. In the U.S., they rendered me to secondary for a few hours of waiting and inquisition until I missed my next flight. Seriously.)

Trying to dodge these questions by saying “It’s a long story” often doesn’t cut it. (American official: “Oh? We’ve got time.”) Having to school everyone about my background on a daily basis gets tiring, and biting my lip through many an intrusive and sometimes humiliating experience leaves psychological “triggers” after a while.

I realized that last month on vacation in Canada, when a bank teller asked for my ID. Passport presented, out it popped: “It’s funny you have a Japanese passport. You don’t look Japanese.” I snapped back: “Let’s not go there. Lose the racism and complete the transaction.”

Afterwards, I asked the teller (an Asian gentleman), “How would you like it if you produced a Canadian passport and I said, ‘That’s funny; you don’t look Canadian’?” He said, not much, and apologized.

Read the rest of the article at: japantimes.co.jp