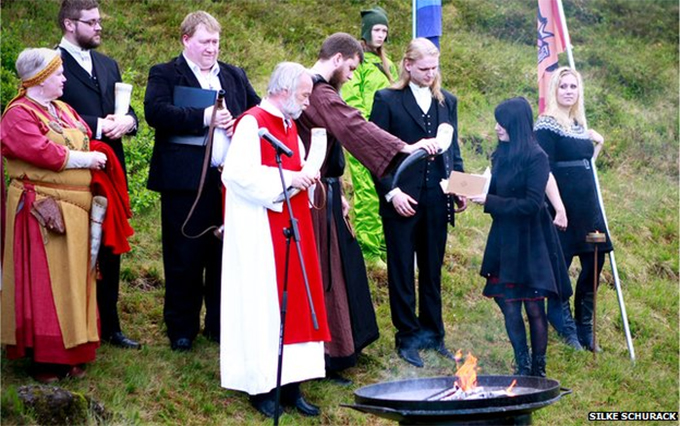 In the wake of yet more attempts meant to pervert and destroy our people, and especially helpless young children, I felt that some response should be made to point out what the traditional Odinist view of homosexual “marriage” is. Why do I put marriage in regard to homosexual union in quotations?

Ancient Odinist Europeans did not perform homosexual marriage ceremonies… and we still do not, nor shall we ever do so, because we do not consider two men joining together a sacrament. Such spiritual perversion has not even been carried out by Christians, at least not until now..

Recently, I became involved with a controversy about Ásatrúar performing homosexual marriages in Iceland, or to be more exact, I ignited a controversy. I was pleased to see that this time, though, I was not alone. This was encouraging to me because although it is hard to believe, I have actually been foully abused and excluded from groups merely for suggesting that it is wrong to expose small children to graphic homosexual pamphlets in school as is done in America. 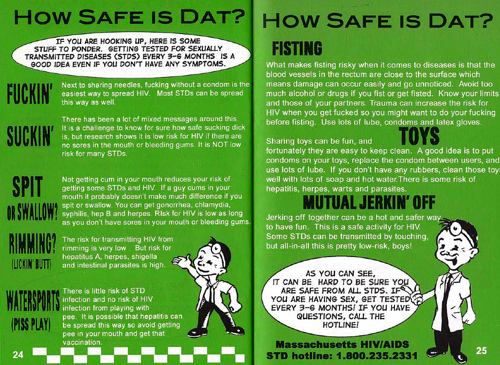 The re-educators involved in the Fistgate scandal show no remorse for having made suggestions of sex acts which might be considered perverted even by homosexual standards, to extremely young children. A Superior Court judge banned the playing of the tapes at one juncture, and the Parents Rights Coalition was sued by the homosexuals. The tapes can be heard on the link to the Mass Resistance site just above.. The authenticity of the tapes has not been disputed.

(Please note: Our websites are the only ones which still feature the homosexual pamphlet that our educational system exposed young people to. Since posting this article last night, more than one person has said it goes to a different page, and I repaired it but it was most definitely exactly the same link. It is working now for me at least but just in case this happens again I am adding it here in the text as well just above. The only other website that shows what the government is doing was shut down but is back again without the pamphlet.) 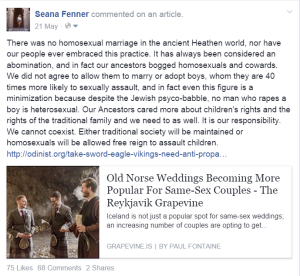 75 people, on this page alone, dared to stand up for reason and common sense and to love our own folk (-;

I found I was barred from making comments the next day and some of the comments of other people who made excellent arguments against this obscene appropriation of our native religion were deleted too, and they were banned as well. This is usually the case with any debate with homosexuals, since Jewish- owned social media always decides in their favor no matter how abusive they are.

Like the Jews and Blacks, homosexuals in our society have become eternal victims. No matter how much they actually terrorize the real victims, who generally are any European ancestry people with character, they are given free reign. Due to this extreme bias, the Jew you see below, who threatened me, and posted numerous explicit pictures of homosexual sex acts on my facebook wall, was not taken off facebook. 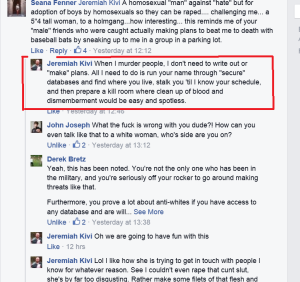 Recently in Montana, a White man speaking hypothetically, in a general sense, about giving back to the Jews some of what they have dished out , was charged with “defamation of character” against the Jewish race, and faces 10 years in jail for it, but when I, a White woman, called the FBI and attempted to report this very specific threat by Jeremiah Kivi, who is a known felon, the response of the FBI was to hang up on me.

I have never been more proud of my fellow Odinists, because this time, for the first time, many people fought back. Never before have I seen so many native European people stand together against homosexual terrorists trying to use our religion to promote their mentally ill and abusive agendas.. and I am happy to say that the homosexuals were completely routed by people who spoke with logic, historical fact, reason, good judgement, and passion.. Here is just one comment from the linked article conversation that also continued to my facebook page.

Arngard Haraldsson Homosexuality was NEVER approved by our Norse ancestors, neither by the Gods! It was looked down on as shame and unmanliness, hence the words Ergi, Argr, Ragr.. To try to promote that this was fully accepted in old times, is nothing more than leftist propaganda. Our forefathers lived by the law of nature, and there is nothing natural with homosexuality, it is in fact against nature, most often struck down by nature. Often we hear these leftist minds telling us that we should do “progress”, “advance”, but there is NO progress in accepting perversions and polluted minds! Our forefathers would rage over this leftist propaganda! These polluted minds keep on lying that “nazism” and “racism” have nothing to do with Pagans, little do they know what either is! Protecting your own people and heritage, having a sound mind, being aware of your enemies, is in fact the one thing! Leftist ideals are far from it, adopting polluted minds, putting its own people in danger! The Mjølnir should be ripped off from their necks! Not worthy of the Gods! 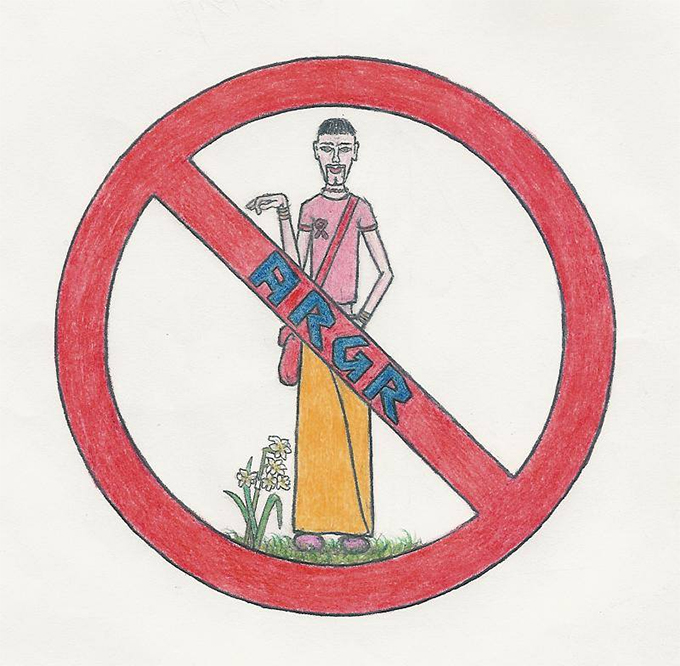 With thanks to Tommy Olsen… No queer-iatru!

If homosexuals were really just after equal civil rights, they already have them, so this is not in any way about rights in the regular sense of the word. It is about forcing their deviant lifestyle upon others, especially those who are too young to be able to protect themselves from indoctrination effectively..

Children who are in their formative stages can be more easily psychologically warped and more easily persuaded to try homosexuality and think it is normal. Very young children can also be more easily physically assaulted, which is why the Boy Scouts had a huge file folder full of homosexual perverts who had sought to be Scout Leaders under false pretenses so that they could molest boys. Children that have been adopted by homosexual couples can be abused most easily of all. What sort of society allows sexual deviants to adopt a child? 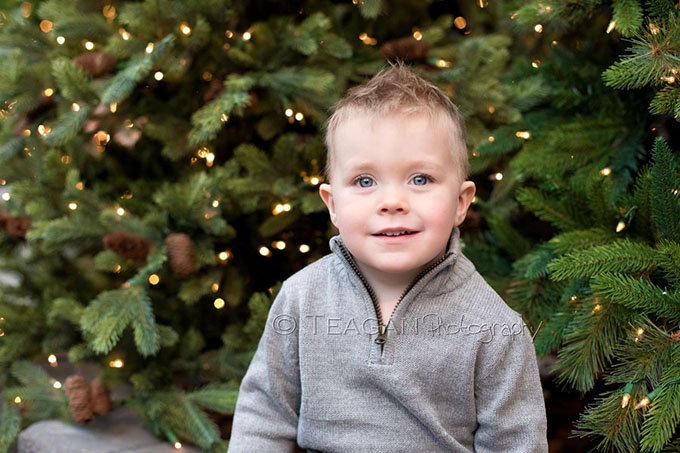 Children are the main targets of cultural Marxist re-education

In various ways, in many countries, we have been reduced to the level of serfs… Parents are forced to send their children to school to be brainwashed, and in Canada, even threatened with losing their children if they tell them that homosexuality is not normal when homeschooling. Now Yale is beginning the next- stage brainwashing already by hosting a workshop to teach sensitivity to bestiality and other deviant behaviors. This course is meant to teach students, in the organizer’s own words, “not to judge”… and to increase “understanding” and “compassion” for people who engage in these activities. After all, we would not want to “offend” anyone, would we?

These maniacal child abusers seek to take away the natural, healthy instincts of these helpless children through guilt tripping and many other psychological techniques, and inappropriately use their authority as teachers to do so. Their program of relentless brainwashing often is aimed at extremely young children because they are more vulnerable, and astoundingly, these agenda-driven teachers sometimes openly state their purpose, as you can see in the link below. These cultural Marxist re-educators have been given an opportunity to abuse children without parental supervision or parental consent in Zionist controlled countries which are Communist in all but name. This horrific program to alter normal healthy children and destroy their natural sexual identity is being carried out in our school systems by ZOG all over the world.

So sick has the pro- homosexual 97% Jewish owned media’s onslaught on kids become, that ABC Family, a channel aimed at pre-teens, has now started televising a program called “Becoming Us” in which youngsters are shown accepting and supporting their adult parents having gender reassignment… This is now supposed to be just another “normal” family activity. I could only stand to watch a few minutes of it, but it would appear that the role model kids in this clearly scripted show act as parents to the repulsive narcissists who should act as parents to their children instead. In any traditional society, these parents would be ostracized. 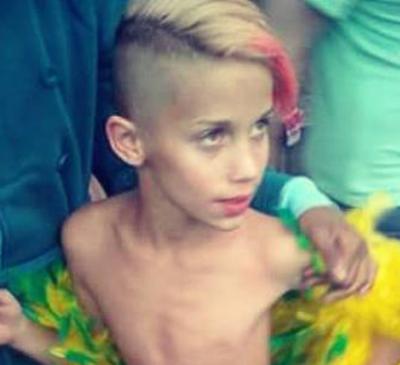 A video of this boy who twerked at a gay parade in Sao Paulo Brazil to RuPaul’s “Sissy That Walk” went viral. All the homosexuals who commented thought it was wonderful and beautiful… demonstrating very clearly indeed how little empathy they have for the kids they warp or molest. Even if this boy had not been raped and he so obviously has, is this supposed to be healthy for a child?

In “Becoming Us”, the sacrifice of allowing perversion to be inflicted upon the children is presented as being a noble step towards tolerance. This is exactly similar to the injunction in Christianity to put a Jewish god before one’s family and tribe in order to receive a reward in heaven, in that this too is presented as being “admirable” rather than cowardly, irresponsible, and traitorous, which is what it really is. So tolerant and non-judgmental has Christianity made those perverted by it, that now Jewish- enforced cultural Marxism no longer needs the Jewish- created Christianity that spawned it. This new stand-alone moral relativist Jewish ethos is plummeting our society to depths from which it may never recover. One thing is certain and that is that it will definitely NOT be cured by more “love”.

Take Up The Sword… The Eagle, Vikings, And The Need For Anti-propaganda

Thank you for supporting same-sex marriage and inclusiveness
By Yvonne Aburrow Oxford | change.org 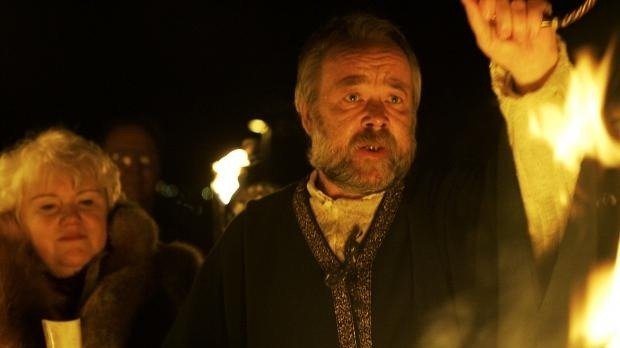 Editor's Comment: Iceland's official Asatru association is going the opposite direction, making heathen heritage PC, something for social justice warriors. What would our ancestors really think of all of this?

We stand with you in your efforts to be allowed to conduct same-sex marriages, and to be inclusive of LGBTQIA people.

We stand with you as you extend a welcome to people of any nationality and ethnicity.

We believe that the Heathen and Pagan virtue of hospitality is best expressed by including everyone who is interested in Heathenry, regardless of colour or sexual orientation.

We are horrified to learn that you received hate mail from right-wing so-called Pagans because of your tolerance and inclusiveness.

Why is this important?

The Icelandic Pagan Association has received hate mail for its inclusive and progressive stance. http://icelandmag.visir.is/article/icelandic-pagan-association-receives-hate-mail-reactionary-pagans-abroad

If you are opposed to racism and homophobia and transphobia in Heathenry and Paganism and polytheism and kindred religions, please sign to show your solidarity with Hilmar Örn Hilmarsson, the high priest of The Ásatrúarfélag, and the congregation of practitioners of the ancient heathen religion of Scandinavia and the settlers of Iceland.

We the undersigned applaud the liberal beliefs and attitudes of The Ásatrúarfélag / Icelandic Pagan Association.