Scientists are questioning if using wi-fi on a laptop to roam the internet could harm a man’s fertility, after lab work suggested ejaculated sperm were significantly damaged after only four hours of exposure.

The benchside tests showed sperm were less able to swim and had changes in the genetic code that they carry.

Experts stress this does not mean the same would occur in a real-life setting and say men should not worry unduly.

But they are recommending more studies.

The preliminary research, published in the journal Fertility and Sterility, looked at semen samples from 29 healthy donors.

Each donor sample was separated out into two pots. One of these pots was then stored for four hours next to a laptop that was wirelessly connected to the internet. The other was stored under identical conditions, minus the laptop.

The scientists, from Argentina and the US, suspect that the effect seen is unrelated to the heat kicked out by a laptop, although heat can damage sperm.

The UK’s Health Protection Agency has been closely monitoring the safety of wi-fi.

It says people using wi-fi, or those in the proximity of wi-fi equipment, are exposed to the radio signals it emits - and some of the transmitted energy in the signals is absorbed in their bodies.

However, the signals are very low power.

The HPA says there is no consistent evidence to date that exposure to radio signals from wi-fi adversely affects the health of the general population.

UK fertility expert Dr Allan Pacey, senior lecturer in andrology at the University of Sheffield, said: "The study is very well conducted, but we should be cautious about what it may infer about the fertility of men who regularly use laptops with wi-fi on their laps.

"Ejaculated sperm are particularly sensitive to many factors because outside the body they don’t have the protection of the other cells, tissues and fluids of the body in which they are stored before ejaculation. Therefore, we cannot infer from this study that because a man might use a laptop with wi-fi on his lap for more than four hours then his sperm will necessarily be damaged and he will be less fertile.

"We need large epidemiological studies to determine this, and to my knowledge these have not yet been performed."

He said men should still be cautious about balancing a laptop on their thighs for hours on end.

"We know from other studies that the bottom of laptops can become incredibly hot and inadvertent testicular heating is a risk factor for poor sperm quality.

"There is a case report of a man who burnt his penis after using a laptop resting on his lap for a long time. Therefore, there are many reasons to try and use a laptop on a table where possible, and this may in itself ameliorate any theoretical concerns about wi-fi."

Ed comment: Wi-fi signals use the 2.4 GHz band range, this is the same as a MICROWAVE oven! The sperm is being microwaved - therefore it dies. If you eat canned food you’re even worse off.

So the super smart scientist futurists have come up with this neat idea of artificially creating sperm in a laboratory so eventually when all men are infertile they can complete "corner the market" of childbirth. This would mean that the government and authorities would have 100% control of human life on this planet. Like Shiva they will be the creators and destroyers of life. Because reverting is not an option ... we need "more bars in more places" - global wi-fi coverage. 5G her we come! 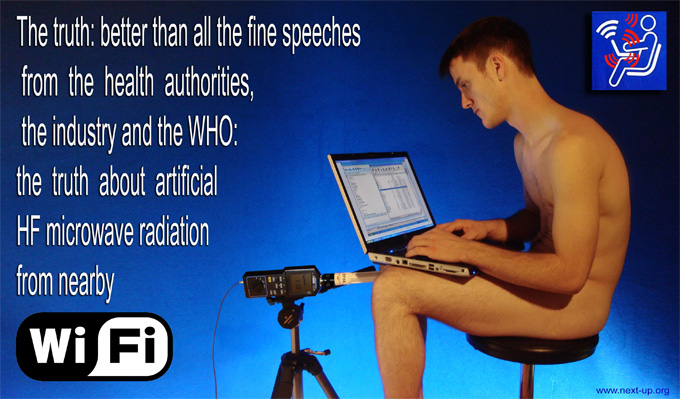