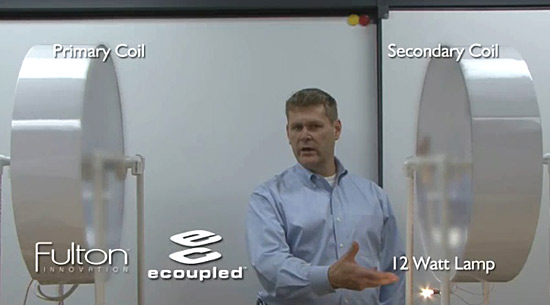 Fulton Innovation teased us earlier this year with its eCoupled wireless power tech, near-field inductive coupling to charge gadgets a few inches away as if by magic. Now they've spread things out, wirelessly powering a 12-watt light bulb from 3 feet away.

There's a catch, though. Those two huge cylinders holding the primary and secondary coils are certainly obtrusive, and you lose a lot of power between them, using 120 watts to power that 12-watt bulb over the 35-inch distance (with dummy loads using up 40-60W of that power). That's not too efficient. Yet. But we've seen resonance devices transmitting electricity with higher efficiency, up to 75%.

Sure, Nikola Tesla did something like this in 1891, but now it might be approaching practicality for real-world installations. After all the technology is perfected, the supreme challenge will be convincing people that their brains won't be cooked if they stand between these two spooky gizmos.

We're confident this is safe, but wait a second — notice in this video demo, the guy's not putting his head between the transmitter and receiver:

Walter Graham - The Dangers of Fluoride