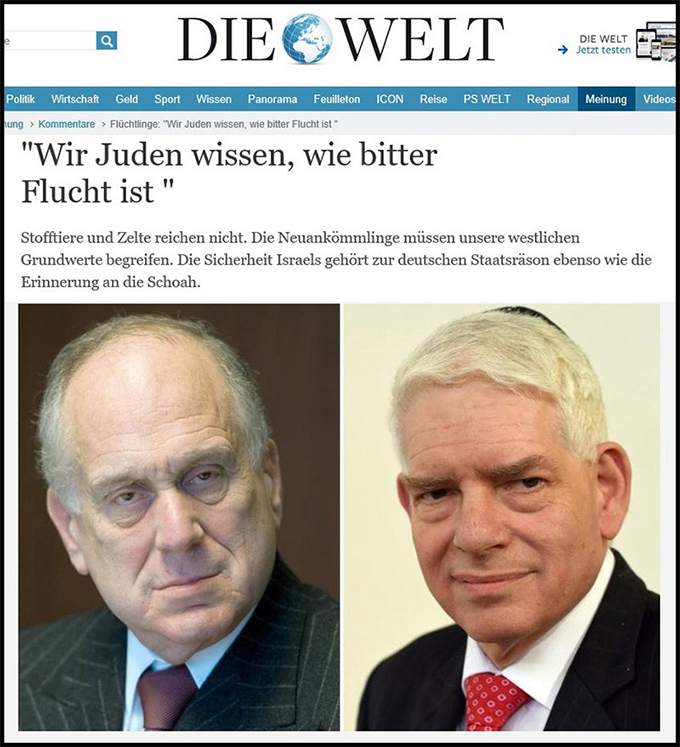 The World Jewish Congress and the Central Council of Jews in Germany have issued a formal statement welcoming the nonwhite invasion of Germany, calling it the “right thing” and an “evolution towards an open society.”

At the same time, of course, both Jewish organizations back Israel, which has a Jews-only immigration policy and which checks potential immigrants to see if they have Jewish DNA.

In a formal statement published in Die Welt newspaper in Germany, titled “Wir Juden wissen, wie bitter Flucht ist” (“We Jews Understand What Being a Refugee Means”), Ronald S. Lauder, president of the World Jewish Congress (WJC) and Dr. Josef Schuster, president of the Central Council of Jews in Germany and a vice-president of the WJC, attacked all Germans who oppose the flooding of their country by nonwhites, calling them “neo-Nazis.”

“We are witnessing a huge wave of spontaneous civic involvement, and administrative decisions are being taken much more quickly than used to be the case in Germany. This has won Germany new sympathies world-wide,” the Jewish leaders wrote.

“For many years, there were complaints about the country’s unwillingness to become a country of immigration, and about a lack of a ‘culture of welcome’. Given what we saw over the last weeks, that’s obviously not the case at all,” Lauder and Schuster continued—ignoring the fact that their country, Israel, arrests, detains and deports Third Worlders who try to settle in the Jews-only state.

“The Jewish community, both in Germany and world-wide, welcomes this evolution towards an open society. It is the right thing.”

Also ignoring the fact that the Jewish lobby and the Jewish state is the cause of all the violence in the Middle East, the two Jewish leaders went on to claim that the wave of “refugees” from Syria are fleeing because of “religion.”

In reality, of course, the official figures show that over 70 percent of the “refugees” are not even from Syria, but from other Third World countries—none of whom would be welcome in Israel.

Furthermore, the Israeli state—which both Lauder and Schuster support—has made it absolutely clear that it will not take a single genuine refugee from Syria, and have even built a new wall to prevent any refugees from entering the Jews-only state.

The two top Jews then went on to demand that the flood of nonwhite invaders be distributed around to all European nations:

“What is needed now is not only a just allocation to the various countries, but also longer-term support. Winter is around the country, and the refugees need good housing. It won’t suffice to provide them with tents, or pretzels, or teddy bears.”

The Jewish leaders were also at pains to point out that the new flood of nonwhites had to become supporters of Israel and to believe in the Jewish Holocaust story:

“It’s also important that those who at present can’t return to their home countries will become familiar with our Western values. In Germany, that means respect for the values enshrined in the Constitution and also an acceptance that support for Israel is part of the political DNA of this country. Moreover, society by and large agrees that the Holocaust must be remembered.”

The two top Jews then went on to condemn any Germans who might be opposed to the invasion, warning against not only physical opposition, but even peaceful political opposition:

“However, the images of the Good Germany we are currently seeing should not hide certain negative aspects: There are still attacks on asylum seekers’ homes, and there could be a backlash at the next elections in favor of certain political parties seeking to capitalize on fears in regard to the refugee crisis.”

In Israel it is the norm for political parties to be ultra-xenophobic, and to outlaw marriage between Jews and non-Jews, as well as between homosexuals—all things which Lauder and Schuster, and their communities in all Western nations, would condemn if practiced by any European nation.

The hypocrisy is staggering: on the one hand, the organized Jewish community in European nations demands that Europeans accept the Third World invasion, while on the other hand, they all fanatically support Israel which has overtly racially-based immigration policies and which actively expels any Third World invaders who might slip in.