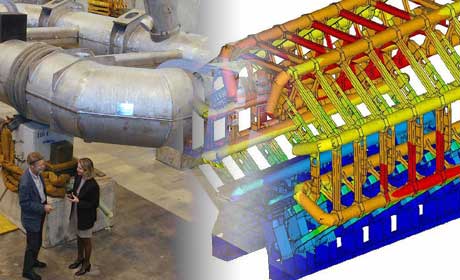 The largest superconducting magnet ever built has successfully been powered up to its operating conditions at the first attempt. Called the Barrel Toroid because of its shape, this magnet is a vital part of ATLAS, one of the major particle detectors being prepared to take data at CERN's Large Hadron Collider (LHC), the new particle accelerator scheduled to turn on in November 2007.

ATLAS will help scientists probe the big questions of the Universe -- what happened in the moments after the Big Bang? Why does the material in the Universe behave the way it does? Why is the Universe we can see made of matter rather than anti-matter? UK scientists are a key part of the ATLAS collaboration and Dr Richard Nickerson, UK ATLAS project leader, who is from the University of Oxford welcomed this important milestone "The toroidal magnets are critical to enabling us to measure the muons (a type of particle) produced in interactions. These are vital to a lot of the physics we want to study, so the successful test of the magnets is a great step forward."

The ATLAS Barrel Toroid consists of eight superconducting coils, each in the shape of a round-cornered rectangle, 5m wide, 25m long and weighing 100 tonnes, all aligned to millimetre precision. It will work together with other magnets in ATLAS to bend the paths of charged particles produced in collisions at the LHC, enabling important properties to be measured. Unlike most particle detectors, the ATLAS detector does not need large quantities of metal to contain the field because the field is contained within a doughnut shape defined by the coils. This allows the ATLAS detector to be very large, which in turn increases the precision of the measurements it can make.

At 46m long, 25m wide and 25m high, ATLAS is the largest volume detector ever constructed for particle physics. Among the questions ATLAS will focus on are why particles have mass, what the unknown 96% of the Universe is made of, and why Nature prefers matter to antimatter. Some 1800 scientists from 165 universities and laboratories (including 12 from the UK) representing 35 countries are building the ATLAS detector and preparing to take data next year.

The ATLAS Barrel Toroid was first cooled down over a six-week period in July-August to reach --269oC. It was then powered up step-by-step to higher and higher currents, reaching 21 thousand amps for the first time during the night of 9 November. This is 500 amps above the current needed to produce the nominal magnetic field. Afterwards, the current was switched off and the stored magnetic energy of 1.1 GJ, the equivalent of about 10 000 cars travelling at 70km/h, has now been safely dissipated, raising the cold mass of the magnet to --218oC.

The ATLAS Barrel Toroid is financed by the ATLAS Collaboration and has been built through close collaboration between the French CEA-DAPNIA laboratory (originator of the magnet's design), Italy's INFN-LASA laboratory and CERN. Components have been contributed in-kind by national funding agencies from industries in France (CEA), Italy, Germany (BMBF), Spain, Sweden, Switzerland, Russia, and the Joint Institute for Nuclear Research (JINR), an international organization based near Moscow. The final integration and test of the coils at CERN, as well as assembly of the toroid in the ATLAS underground cavern, was done with JINR providing most of the manpower and heavy tooling.

PPARC is government funded and provides research grants and studentships to scientists in British universities, gives researchers access to world-class facilities and funds the UK membership of international bodies such as the European Laboratory for Particle Physics (CERN), the European Southern Observatory (ESO) and the European Space Agency. It also contributes money for the UK telescopes overseas on La Palma, Hawaii, Australia and in Chile, the UK Astronomy Technology Centre at the Royal Observatory, Edinburgh and the MERLIN/VLBI National Facility, which includes the Lovell Telescope at Jodrell Bank observatory.