You thought the whole ’EUSSR’ thing was over the top? Have a look at this poster 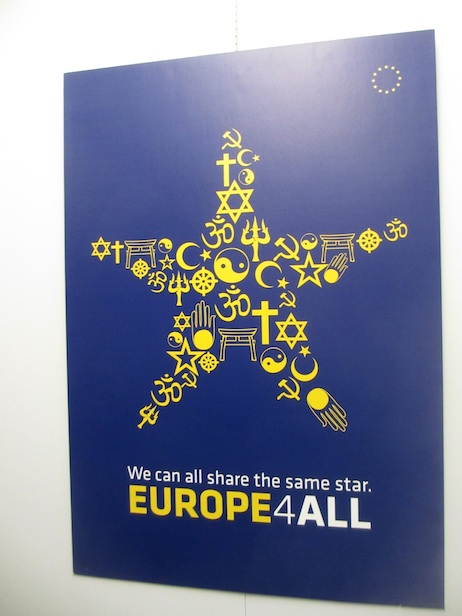 Take a close look at this promotional poster. Notice anything? Alongside the symbols of Christianity, Judaism, Jainism and so on is one of the wickedest emblems humanity has conceived: the hammer and sickle.

For three generations, the badge of the Soviet revolution meant poverty, slavery, torture and death. It adorned the caps of the chekas who came in the night. It opened and closed the propaganda films which hid the famines. It advertised the people’s courts where victims of purges and show-trials were condemned. It fluttered over the re-education camps and the gulags. For hundreds of millions of Europeans, it was a symbol of foreign occupation. Hungary, Lithuania and Moldova have banned its use, and various former communist countries want it to be treated in the same way as Nazi insignia.

Yet here it sits on a poster in the European Commission, advertising the moral deafness of its author (I hope that’s what it is, rather than lingering nostalgia). The Bolshevist sigil celebrates the ideology which, in strict numerical terms, must be reckoned the most murderous ever devised by our species. That it can be passed unremarked day after day in the corridors of Brussels is nauseating.