The world has long been fascinated with the idea that the blood of young people could have rejuvenating qualities, like a glorious fountain of youth, only horrifying. Turns out the world is sort of right.

A new study by researchers at Stanford University shows that injections of young blood can reverse the signs of aging in mice. The experiment is as simple as it sounds. Give an old mouse a syringe full of blood from a young mouse, and run some tests. Leader of the research team Saul Villeda and his team found that the boost of youth improved learning and memory in the older mice. Villeda shared his research with the Society for Neuroscience conference in New Orleans on Wednesday and did not understate its implications for conditions that are caused by deteriorating brain function. "I think any sort of disease that has that component, there is a chance this might help," he said. "What I am thinking is if we can address it earlier, when our body still has the control to prevent this from happening, then we might not have to cure Alzheimer’s, we might just be able to stop it."

This is crazy, because in the past, crazy people have latched on to the idea that young blood could get them closer to immortality. Kim Jong-il, for example, used to "inject himself with blood from healthy young virgins in a bid to slow the aging process," according to The Guardian. Quite remarkably, it now appears that Kim Jong-il wasn’t aggressive enough. Villeda actually supplied a group of 18-month-old (read: very old) mice with eight transfusions over the course of a month -- that amounts to about 5 percent of a mouse’s blood supply -- and found that the brain connections in the older mice had increased by 20 percent after the treatment. "One of the main things that changes with ageing are these connections, there are a lot less of them as we get older," said Villeda. "That is thought to underlie memory impairment -- if you have less connections, neurons aren’t communicating, all of a sudden you have [problems] in learning and memory."

This is actually not the first study to suggest that young blood reverses signs of aging. In 2010, a team of Harvard researchers connected the circulatory systems of young and old mice so that their blood mixed and found that it rejuvenated the blood-forming stem cells in the older mice. In the words of MIT’s Technology Review, "They found that the procedure made the blood-forming stem cells in older animals act young again." The biggest difference in that study seems to be the mice’s ability to produce immune cells, though it’s unclear exactly what the long term effects of the blood mingling would have on the animals.

We’ve hardly discovered the fountain of youth, and we certainly haven’t found proof of vampiric immortality. Oddly enough, though, we’ve discovered something in between, in mice at least. This does not mean you should take your vampire costume more seriously this year, though.

The study did not cover the effects of drinking young blood.

Dr Villeda said: "Do I think that having young blood could have an effect on a human? I am thinking more and more that it might. " 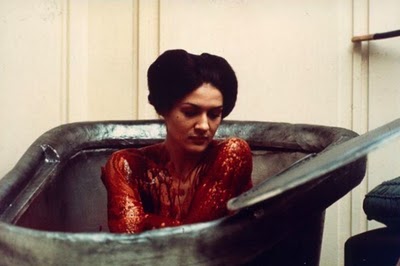 Elizabeth Bathory, the woman who came to be known as the "Blood Countess," was born into Hungarian nobility in 1560. She is said to have suffered from fits and outbursts of rage -- possibly even epilepsy. From an early age, she witnessed her father’s officers torture the peasantry that lived near her family’s estate.

[...]Bathory’s acts have a way of engendering a hybrid of truth and legend. Perhaps the most notorious legend about Bathory is that she bathed in her victims’ blood. Inevitably, this led to rumors that the countess was a vampire. This legend was first published in 1720 by a Hungarian priest who interviewed local peasants and read testimony from the trials of Bathory’s accomplices. She reportedly claimed to use blood to keep her skin young -- she wanted to remain beautiful for her husband.