Aug 15, 2014
Zen Gardner began his online writing and blogging 8 years ago after a lifelong quest for truth and several major life changes. His focus is empowering humanity to reach its full potential in conscious awareness and its resultant activation in the expression of our lives. He writes on a variety of subjects from earth and human origins and our manipulated spiritual and historical context, to current political events in an effort to dismantle old mind sets in order to free and encourage the awakening of human consciousness that is readily available to all. In this program, Zen discusses the process of awakening the warrior. He’ll talk about breaking free from passivity and how to take initiative. Also, we talk about the problem with Zionism and their genocide attempts. Zen says we’re coming to a point where we won’t be able to compromise any longer. It is our responsibility to respond against violence. He emphasises that this battle needs warriors, not observers standing on the sidelines with pity and guilt. Those who don’t yet recognize that we are engaged in a war, will soon be awakened to it. Later, Gardner talks about pornography and feminism as a tool to break down the family, to degrade and create imbalance between the sexes. In the second hour, we’ll speak about Zionist control of the media and the insanity of Christian Zionists, who support Israel at all costs. We’ll also talk about escapism, increased suicide rates and urban warfare. Near the end, we discuss heroism of the warrior as the method of resolution.

zengardner.com
Curiosity killed the cat
Now I Lay Me Down to Sleep
Louis Theroux On Ultra Zionists
Swedish youth suicides hit 25-year high
Zionism: Tora Bora Tunnels and Other Mad Zionist Psyops
The Word Warfare of Rabid Psychotic Zionism
MH17 as a diversion
Truce or Consequences – The Cunning Cover for Continued Genocide
Peace at the Edge of the World
Transcending the Parasitic Fear Agenda
Awakening - The Clash of Civilizations
Truth or Denial - Facing the Age of Information Overload 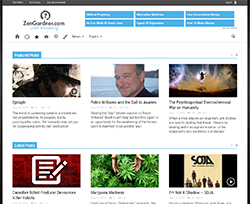