Vox Day is a writer, a professional game designer and a three-time Billboard top 40 recording artist. He is the author of “SJWs Always Lie: Taking Down the Thought Police.”

We'll discuss how Social Justice Warriors have plagued mankind for more than 150 years, but only in the last 30 years has their ideology become dominant in the West. Having invaded one institution of the cultural high ground after another, from corporations and churches to video games and government, there is nowhere that remains entirely free of their intolerant thought and speech policing. Vox explains how the SJW agenda of diversity, tolerance, inclusiveness, and equality flies in the face of both science and observable reality. We also anticipate the new frontier for SJW's and talk about Salon's piece by a self-confessed pedophile to explain his urges in sympathetic terms, “I’m a Pedophile, But Not A Monster.”

Later, Vox gives the 3 laws of a SJW and lays out their operating system: always lie, always double down and always project. He gives advice on what to do when SJW's attack, usually hoping it will result in social ostracism and the loss of employment for the attackee. Vox provides the keys to counterattack.

Tyr - By the Sword in my Hand 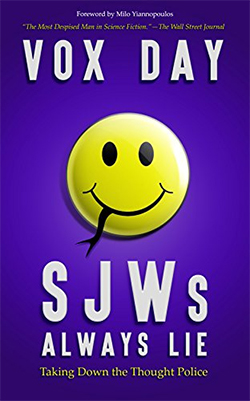