Albert Einstein: The Myth, the Plagiarist & the Zionist

Christopher Jon Bjerknes is a writer and researcher who has published numerous books and articles on the history of the theory of relativity, Einstein, Zionism and the Armenian Genocide. “Albert Einstein: The Incorrigible Plagiarist” and “Mileva Einstein-Marity: Einstein’s Partner in Crime” are among Bjerknes’ most controversial works.

In the first half, Christopher describes the evidence pointing to Albert Einstein's plagiarism of Hendrik Lorentz and countless other physicists in his development of the theory of relativity. He talks about Einstein the Zionist and the “Einstein Terror” – a Semitic method of suppression that was used to literally terrorize and imprison anyone who dared question the dogma of Einstein. We get into Einstein’s soured reputation in Germany and the big hype surrounding his arrival in New York City, where he relocated in order to specifically promote Zionism. Christopher illustrates how Einstein manipulated credit for the E=mc² formula and failed to understand the basic concept of space time. We touch on the gravitational wave theory being hyped in the scientific press today and the costly reinforcement of flawed experimentation that is deliberately leading Western science away from technologies being advanced in Israel. Then, Christopher gets into the role that Mileva Einstein-Marity played in turning Einstein’s theoretical ideas into formal mathematical theories. We also put focus on the development of the pop culture icon of Einstein and the impact this cultish persuasion has had on the foundations of Western civilization.

In the members’ half, Christopher details Einstein’s instrumental role in the Zionist agenda and the fact that he was treasonous to his own people and despised Europeans. We look at the Freemason Coudenhove-Kalergi’s founding ideology of the European Union and the banking moguls who funded an explicit plan to weaken the European people, lift up the so-called masterful and morally superior Jewish people, and fulfill the ancient messianic prophecy of world rule as declared in the Talmud and Kabballah. Christopher points to other pseudo-Christian kabbalists like Isaac Newton who were instrumental in promoting the Christian Zionist movement. He explains the implications of the concept of “as above, so below” in relation to the psychological, technical and religious warfare that has been unleashed by Jews to propagate political movements designed to quickly bring forth prophetic conditions. Further, Bjerknes emphasizes how the current rise of Islam in Europe is part of an ancient plan to annihilate Christians via the Muslim hand. We consider how Whites have been programmed with the belief of their original sin, and how Islamic teachings justify and encourage the mass raping and slaughter of “white devils.” Later, we look at the infiltration of Zionist interests within the US White House, and the modern liberal tactic of subverting the Western world from within. At the end, Christopher talks about the Anno Lucis dating system and highlights what the New Testament says about the 2500-year-old conspiracy to genocide all gentiles. 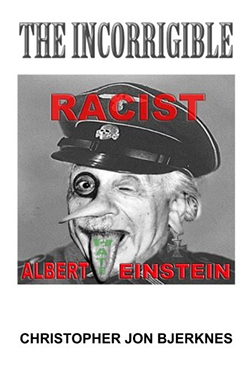