Nov 4, 2015
David Dees began his career as a commercial artist in the early 80s and has produced advertising illustration for Paramount Studios, Hanna Barbera, and Disney Home Video, along with cartooning and children’s book illustration for Sesame Street magazine, Family Home Entertainment, and TIME Magazine for Kids. In 2003, when Dees became fully awake to the New World Order Zionist agenda, he began fighting back with his own brand of activist political artwork and social commentary, with nearly 600 hard hitting and comical art pieces. David also designs and illustrates covers for authors of health, political, fiction and non-fiction books.

David begins with the story of his NWO awakening and what prompted him to leave the Hollywood entertainment industry and pursue a life creating political art in Sweden, where he was eventually expelled once his provocative work caused too much commotion. Dees describes Sweden’s social climate and the typical self-policing, submissive mindset that keeps its people contained and unresponsive to the Zionist EU agenda to destabilize Europe. David talks about coming earth changes and deep underground military bases beneath Sweden’s vast forests and throughout the US. We look at the EU’s totalitarian foreign policies that have opened the floodgates to a Muslim ‘refugee’ invasion and consider the tactics of Organized Zionism in the destruction of homogenized European cultures. Then, David highlights some of his compositions, which address everything from 9/11 to anchor babies, vaccines, GMOs and geoengineered weather.

In the members’ section, David continues detailing his artwork, including the Holocaust exposé series he has not yet released. We talk about the magical mind-controlling world of Hollywood, and Dees explains the deprogramming effect of his works. Dees says that we are at the cutting edge of expanding consciousness and the time is ripe for artists of all breeds to aid in an awaking of the programmed, reality avoiding masses while inspiring other creative souls. Then, we size up the social influences that shape Sweden’s culture compared to the US. We get into the Agenda 21 Wildlands Project along with the real threat of population controlling vaccines. Later, David gives us an idea of what to expect if we do indeed experience a magnetic cataclysm like Planet X entering our solar system and how to prepare. At the end we appraise the 2016 US presidential candidates and the revolutionary power of the internet.

Maxence Cyrin - Where Is My Mind 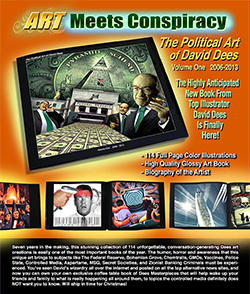