Jul 14, 2014
Dan Rayner is a 20 year old Politics & Philosophy student at the University of Sheffield, England. Dan found Asatru gradually at the age of 16. At the age of 19 he founded the Nationalist Asatru News and Nationalist Asatru.ltd, an England based news and Nationalistic Asatru promotion effort seeking to promote Asatru in its purest and most eternal, elegant and inspirational form, to simultaneously spiritually inspire and politically inspire our elegant, ethereal and extraordinary Nordic & Germanic folk to stand up and speak up for their existences. In the first hour, Dan discusses the Asatru mindset and how it can unlock the European people. Asatru, properly understood and applied, is the most positive force in this world. He explains how folk awakening is the solution to the problems in our era. Later, we’ll discuss the non Germanic spiritual influence of the Semitic religions and Dan shares his view on the European Union and Christian nationalists. In the member’s hour, Dan speaks on the conditions in the UK after mass immigration. He says an ethnic resurgence of identity is taking place in the minds of the native Europeans. He’ll also talk about foreign policy and political problems instigated by Jewish supremacists. We’ll discuss today’s political ideologies that are unnatural and not in line with Asatru ethics. Later, we’ll talk about health since Asatru is about doing everything in accordance with nature. Also, we talk about the role of technology and clarify that paganism does not mean being a Luddite. Lastly, Dan shares what happened when his university confronted him on his website.

nationalistasatrunews.com
Russell Group
World Jewish Congress
A conclusive report on the undeniable & self-evident Jewish creation of (and sustaining force behing) the EU
Asatru page
What is Asatru page
My cause on behalf of my noble Race and Asatru racial-spirituality
Asatru awakening: purity starts with you, the noble Germanic individual
On Behalf to our Noble People's Right to Exist: Europeans Rise Against Our Own Destruction
The unstoppable awakening against immigration (non-whites) : indicated by polling data
Antonio Rosmini-Serbati

The 13th Warrior - Sound of the Northmen 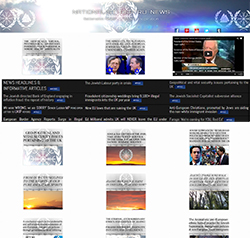