Jun 1, 2015
Stephen A. McNallen has been a soldier, a journalist, a juvenile corrections officer, and a schoolteacher. In 1971, McNallen founded the Viking Brotherhood, the first legally recognized religious organization dedicated to the Gods and Goddesses of Northern Europe. Today, McNallen is the head of the Asatru Folk Assembly, the preeminent Asatru organization on the North American continent. Stephen joins us following the recent publication of his first book, "Asatru: A Native European Spirituality." He begins by clarifying some of the terminology often associated with indigenous northern European religions and traditions, and he gives an overview of the pre-Christian Germanic roots of Asatru along with its Celtic and Nordic connections. Stephen explains the attitude of Asatru beliefs, which above all consists of an ancestral faith practiced with a sense of freedom as noble men and women who do not need to be saved. He gives emphasis to the essence of connectedness – to our ancestors, our decedents yet to come, our living kin, the Gods and Goddesses, and the Earth and nature – ties that hold benefits and responsibilities. We discuss the savage Christianization of Germanic tribes that forced the abandonment of their natural spirituality and destroyed the importance of kinship bonds. Steve points to distinctions between the monotheistic father-God religions that view humans as slaves and property, and the polytheistic view of multiple Gods as kin and friends – Holy Powers that are part of one’s integral being. In the second segment, we consider how the Viking Sagas differ from the Christian bible, and Stephen describes where Asatru draws a sense of order and strength and addresses the fundamental questions of philosophy from a collection of values and virtues known as the 9 Noble Virtues and the 12 Traits. Then, we look at the themes of some of the central wisdom quest myths that teach the Odinic way of transcending and acquiring higher consciousness. We talk about the symbolism of performing rituals such as blót and drinking mead when recognizing the devotion, energy and insight received from the Gods and our ancestors. Later, Stephen gives a rough sketch of the pantheon of sky and Earth Gods recognized in Asatru and how their stories have been passed down in different ways throughout time. At the end, we reflect on the significance of the reemergence of Asatru during this time, an awakening that offers a healing and revival to the European people who have lost their sense of identity and wholeness. 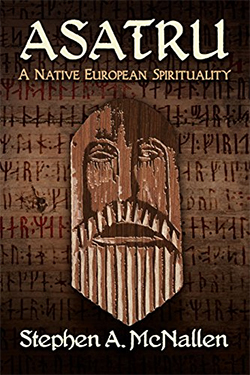