Asatru Hof: A Temple for the Norse Gods and Goddesses

Aug 10, 2015
Stephen A. McNallen has been a soldier, a journalist, a juvenile corrections officer, and a schoolteacher. In 1971, McNallen founded the Viking Brotherhood, the first legally recognized religious organization dedicated to the Gods and Goddesses of Northern Europe. Today, he is the head of the Asatru Folk Assembly (AFA), the preeminent Asatru organization on the North American continent. He is also the author of “Asatru: A Native European Spirituality.” Stephen is with us to talk about the AFA’s recent property acquisition in Brownsville, California – a site that will be used as a hof – a place to conduct rights and rituals and religious functions, along with serving as an Asatru community center and multipurpose space. He describes the lay of the land and the design of the existing grange hall that is now named “Newgrange Hall,” and also highlights improvements and embellishments that will embody an expression of the native, pre-Christian spirituality of Europe. We discuss how spiritual connectivity to ancient traditions has been largely abandoned in our modern materialistic world, and Stephen speaks to the symbolic timing of establishing this very emblematic sacred space that will serve to reawaken the primordial traditions and energy of the Germanic peoples. In the members’ segment, we talk about the Christian revolt against the old ways that resulted in the burning of many Germanic temples like the one in “Uppsala” (Ubsola), Sweden, and then we consider the archetypal embeddedness of ritual buildings that exists for most folk. We also reflect on significant aspects of spiritual bonds and mystical powers of the lands that AFA seeks to reenchant. Stephen explains the main purposes and philosophies of the AFA, underscoring the Asatruar values of autonomy and freedom from the control mechanism of nation states. In conclusion, Stephen addresses his involvement in counteracting poaching in Africa, and we also ponder what it takes to remain willing to resist the norms of our technocrat-ruled pop culture.

NewGrange Hall - Asatru Hof - Go here to contribute to the hof
asatrufolkassembly.org
runestone.org
The Golden Hall of Edoras and the Vikings
Ancient Viking Feasting Hall Discovered In Sweden Is Straight Out Of "Beowulf"
First Viking Temple in 1,000 Years Coming to Iceland
Lords of the Ring
First line of Beowulf misunderstood for 200 years
The Ambassador
Trial postponed for hunter guide accused in Cecil the lion's death
Sweden grants tax-payer money to religious extremists breaking the law.

The Lord of the Rings - Rohan 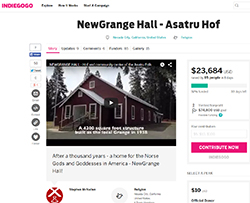